AMENDMENT TO THE LAW

Petition seeks to amend Universities Act to do away with delegates voting system.

• The petition submitted by Owino on September 8 seeks to allow university students to choose their leaders by popular vote.

• Owino cites denial of democracy and manipulation from varsity administration in the current delegates voting system. 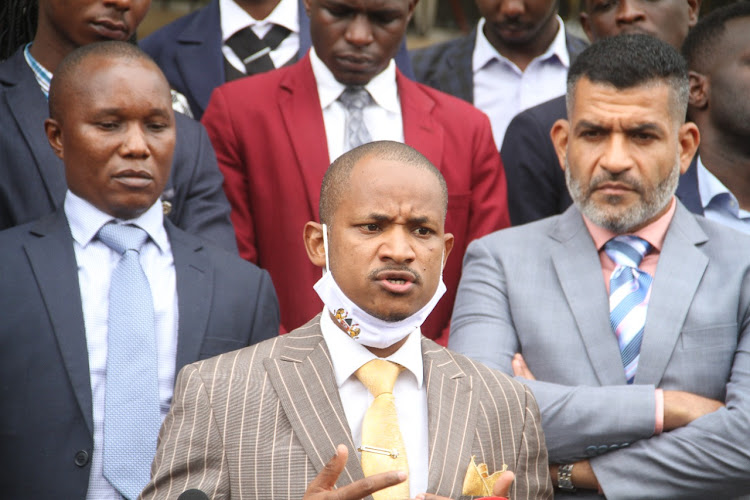 NOT OVER: Embakasi East MP Babu Owino, Ganze MP Teddy Mwambire and Mvita MP Abdulswamad Nassir lead student leaders from the University of Nairobi in a press conference in Parliament over increment of school fees on July 15, 2021.
Image: EZEKIEL AMINGA

Embakasi East Member of Parliament Babu Owino has submitted a petition to Parliament asking the legislators to amend the Universities Act and do away with the delegates voting system.

The petition submitted by Owino on September 8 seeks to allow university students to choose their leaders by popular vote.

Owino cites denial of democracy and manipulation from varsity administration in the current delegates voting system.

“That the current arrangement for the conduct of elections for university student leaders violates the principle of democracy and universal suffrage,” the petition reads.

The legislator further highlights reduced diligence in the performance of student leaders who are often manipulated by management.

“That the election of student leaders through delegates system has had a detrimental effect on the vibrancy of student leadership in universities since the outcome of elections is often influenced by the administration,” the petition reads.

He also faulted universities' management for using the system to saddle students by imposing leaders who are not effective at championing their rights.

"That successive university administrations have consistently manipulated the current system for the election of university student leaders thereby imposing leaders of their choice," the petition reads.

The vocal lawmaker further asked concerned parties to mirror national elections and ensure the same is implemented in university elections.

This, he says will mould university student leaders and prepare them for bigger roles at the national level.

However, Owino has cited several unsuccessful efforts to involve education stakeholders to scrap off the system and return the elections by the popular vote system.

The bill which was fronted by Garissa Township MP Aden Duale has seen the students’ association constitute itself into electoral colleges based on their academic departments, schools, or faculties.

The amended Act put in place in December 2016 replaced the popular vote with the delegates system.

The Act stipulates that the students’ fraternity, in public and private universities, be ruled by a Students’ Governing Council.

The council should consist of the chairperson, vice-chairperson of the opposite gender, a treasurer, a secretary-general, and three other members who represent special interests.

Students from each of these faculties referred to as electoral colleges elect three representatives who then elect the students’ governing council that observes a two-third gender rule.