Why Raila men are at war with Jimi Wanjigi 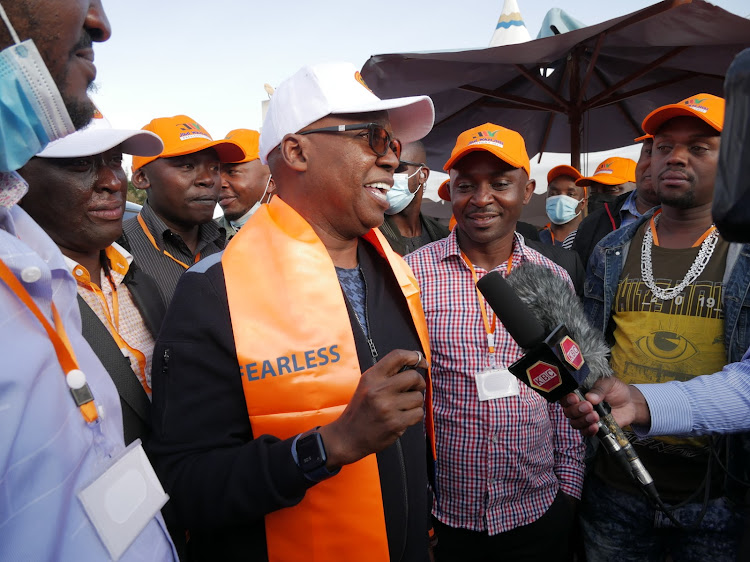 ODM officials are at war with billionaire businessman Jimi Wanjigi over the party's presidential flagbearer.

The officials are questioning his mission in the party. Wanjigi's candidature was initially seen within ODM circles as a decoy to help party leader Raila Odinga make inroads in President Uhuru Kenyatta’s Mt Kenya backyard.

However, his latest move has elicited sharp reactions. Raila's allies are questioning his intentions, wary of the fact that internal feuds could slow down the former prime minister.

This comes at a time when ODM deputy party leaders—governors Hassan Joho (Mombasa) and Wickliffe Oparanya (Kakamega)—appear to have retreated.

Wanjigi has of late been asking Raila to retire and allow “fresh blood” to lead the country, sentiments that some insiders say are more than friendly fire.

In an interview with Citizen TV on Sunday, for instance, Wanjigi described Raila as one of the most formidable politicians he has known but whose glory days are over.

“I can tell you my true belief is that he had his time and his season,” he said.

However, ODM leadership is not willing to take the punches anymore and is questioning Wanjigi’s “hurried manner” of pushing his candidature.

Party chairman John Mbadi and secretary general Edwin Sifuna accused the businessman of dictating how the flagbearer should be picked.

The party will not be arm-twisted but will be guided by its election rules to pick its candidates, the duo said. Sifuna reminded Wanjigi that ODM rules allow the issuance of a direct ticket to its flagbearer.

Last week, Wanjigi stormed Chungwa House with a raft of demands, including reopening a fresh window for applications by presidential aspirants.

He also demanded a certified list of delegates who will be choosing the presidential candidate during the Orange party's national delegates conference.

“Pursuant to my request for the presidential ticket and in accordance with the party constitution, I wish to request confirmation of the timelines to the delegates conference to nominate our party’s presidential candidate,” Wanjigi said in a letter to the party.

“...the timing and mechanism for party primaries at the ward, constituency and county levels in order to allow members to interrogate the leadership qualities and political intent of aspirants across the board.”

The businessman is also demanding that the list of delegates be digitally secured to ensure party democracy is upheld.

But Mbadi termed Wanjigi’s demands laughable and cautioned him against setting conditions.

The Suba South MP said Wanjigi has yet to pay the Sh1 million aspirants fee and should be the last person to make demands.

"The list of delegates is being compiled by the national elections board. The board will announce when the list will be ready, the campaign period for aspirants. I don’t know what he is in a hurry for?

But contacted, Wanjigi dismissed as a non-issue the claims that he has yet to pay the Sh1 million aspirants fee.

The tycoon, who has been meeting delegates from Central and Nairobi, is keen on winning the support of the majority delegates when ODM holds its national conference later in the year.

And the party can also have ODM cardholders vote directly and determine who among the spirants will fly the party’s flag.

"The party is like a club guided by laid-down rules. ODM nomination rules talk of four methods in choosing its candidate,” Sifuna said.

“He (Wanjigi) can't come and dictate how the party operates. He is bound by the rules just like everyone else.”

The leaders also castigated the businessman for opening parallel party offices, terming the move a breach of the ODM constitution.

They said any office opened without the approval of Chungwa House is not recognised as the party's office.

“He should not purport to open party offices. Our offices must be done in consultation and coordination with the national office. If he wants a party office somewhere, he just needs to notify us. We are discouraging individuals from owning party members. We want the party to own party offices.”

But Wanjigi questioned why top party officials would be uneasy with his initiative to popularise the party through new offices.

He vowed to continue opening more offices, claiming it is part of the party’s popularisation initiative and should be promoted by all officials.

“I don’t know why anyone would be uncomfortable with a more popular party. Are they complaining because I have pointed out that they are running primary elections under cover of darkness and breaking the party laws? They must read and familiarise themselves with the party nomination rules, specifically Rule 7 and follow the rules,” Wanjigi said.

“They must be ready to follow the rule of law in the party because that is what I intend to do if elected to the Office of the President.”

Wanjigi’s claims that the party has kept members in the dark over the ongoing grassroots elections also rattled the party’s leadership.

“He talked about party doing elections. A decision was taken by the top organ of the party to have staggered elections. We have not been opaque about it; the process is ongoing and he should not question that,” Mbadi said.

Wanjigi came into the limelight during the last general election after a raid on his Muthaiga residence by police officers. Raila camped in his house to talk the officers out of arresting him.

Besides Raila, Wanjigi will face off against heavyweights Oparanya and Joho for the party’s presidential ticket.

ODM had closed the window for receiving applications from interested presidential hopefuls, but there is growing pressure to have it reopened to accommodate those nursing presidential ambitions who didn't meet the initial deadline.

Only Joho and Oparanya submitted their papers in time.