Duale petitions Muturi to rule on future of BBI-like bills

•The court, in the August 20 ruling, held that the basic structure doctrine is applicable in Kenya.

•House leaders lament that ruling could affect any bills, more so those with an impact on the rights of citizens. 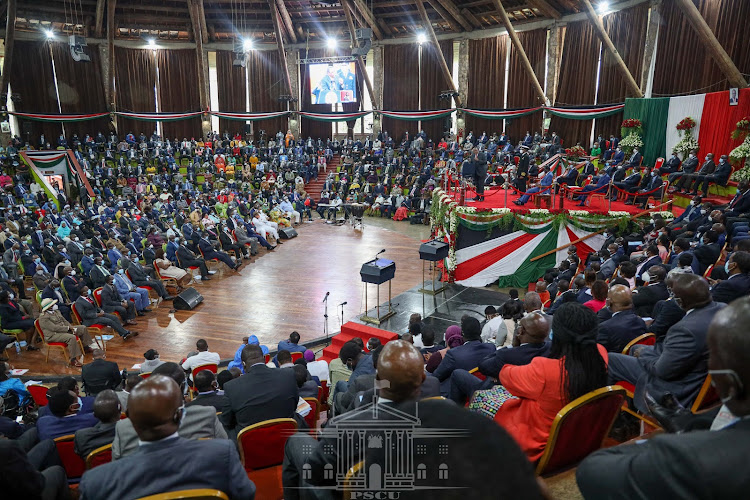 Delegates at the Bomas of Kenya during the presentation of the BBI report, November 2020.
Image: PSCU

National Assembly Speaker Justin Muturi is expected to rule on the future of BBI-like bills currently before Parliament after the courts scuttled the referendum process.

Garissa Township MP Aden Duale on Wednesday asked the speaker to rule on how the House should handle the legislation.

He argued that some of the bills, which are at different stages of consideration, affect the basic structure of the Constitution which the Court of Appeal has said is unamendable.

“I ask this in light of the judgment of the High Court and Court of Appeal in the Constitution of Kenya (Amendment) Bill, 2020 - the BBI Bill, on the basic structure application,” Duale said.

The court, on the August 20, held that the basic structure doctrine is applicable in Kenya.

The National Assembly has at least seven bills at different stages that are proposing to amend the Constitution.

There is a bill by Busia Woman Representative MP Florence Mutua which seeks to delay nominations of MPs to the House until after elections.

Ndia MP George Kariuki also sought law changes to include Kenyans in the diaspora as a special interest group to be nominated to Parliament.

Uasin Gishu Woman Rep Gladys Shollei also has a bill seeking to increase the number of women MPs from 47 to 136.

Among them is a proposal for political parties to nominate to the National Assembly and the Senate, presidential and deputy presidential candidates.

CIOC further seeks to provide that the President shall appoint Cabinet secretaries from among MPs.

Several legislative proposals to amend the Constitution are pending before the Justice and Legal Affairs committee for pre-publication scrutiny.

Some are before the Budget and Appropriations Committee for financial analysis.

“Looking at the proposals for amendments as contained in all the pending bills and legislative proposals, it is clear that they contain matters that were contained in the BBI Bill which has since been declared unconstitutional,” Duale said.

He sought the speaker’s guidance on the effect of the judgment on the various bills in terms of the basic structure application.

The MP sought information on how the question of the basic structure is to be determined and at what stage of a bill shall the determination be made.

The lawmaker further wants direction on whether it would be prudent for the House to suspend any further processing of the said bills and legislative proposals.

“Mr Speaker, you have ruled before that Parliament should not act in vain. I respectfully hold the view that we shouldn’t spend time considering bills or legislative proposals to amend the Constitution, only for the Courts to fault the outcome for not following the just process due to lack of a sound legal framework,” he argued.

Adding that setting the legal framework is the business of Parliament, the MP asked Muturi to direct the CIOC or JLAC to formulate a bill to actualise the provisions of Articles 256 and 257 with specificity.

“I ask that, conscious that this task would be better undertaken by a committee and not an individual member due to its magnitude and enormity.”

Muturi, in his initial response to the call, said the judges in both courts ought to have gone further to clarify whether the reference to the doctrine of the basic structure only referred to requirements of Article 255 of the Constitution.

“If it applies to everything, then it means that everybody, including the Judiciary itself as the highest office which advises the President to dissolve Parliament for not doing something about the Constitution, needs to tell us how are we to do it if we can’t touch the Constitution,” Muturi said.

He cited the challenges with the implementation of the two-thirds gender rule which Parliament has failed to attain after five attempts.

“It is a matter that requires a lot of reflection. Maybe we haven’t seen the last of it. There is the other matter of dissolution which is before the court. If we cannot touch the Constitution, how then can we be blamed,” the speaker said.

Majority leader Amos Kimunya asked, “If the president of the Court of Appeal is in office illegally ab initio, then the court did not have a jurisdiction to look at this matter. Even their own judgment could well be a challenge in respect of this matter.”

Effort is important, but knowing where to make an effort makes all the difference.
Opinion
10 months ago

New radical plan for President to hire and fire DP