Presidency is yours to lose, Uhuru tells opposition chiefs

Either unite in new alliance or forget presidency, Kalonzo, Mudavadi and Wetang'ula told 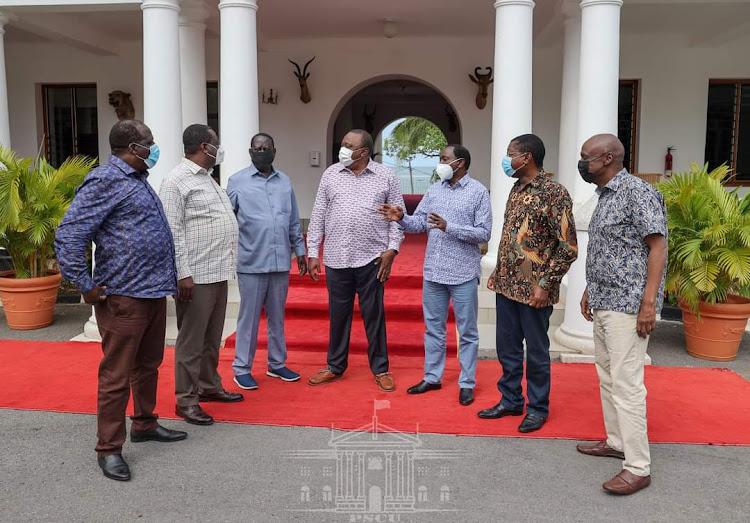 President Uhuru Kenyatta has escalated his plans to reunite the Nasa principals as he crafts a broad-based political machine to face Deputy President William Ruto next year.

Uhuru, who has bitterly fallen out with Ruto, has gone flat out to compel the opposition into an alliance bringing on board ODM boss Raila Odinga, Nasa-Oka and others.

In a clear demonstration of his resolve to have Nasa chiefs close ranks, Uhuru on Tuesday held a three-hour meeting with them at State House, Mombasa.

The President is keen to have Raila — his handshake partner and who fell out with his former Nasa allies —join forces with the One Kenya Alliance. The aim is to crush Ruto's quest for State House.

The Oka partners of Kalonzo Musyoka (Wiper), Musalia Mudavadi (ANC), Moses Wetang'ula (Ford Kenya) and Kanu's Gideon Moi attended the meeting alongside Raila and Kakamega Governor Wycliffe Oparanya. The governor is one of two deputies to Raila in ODM.

Their response to Uhuru's entreaties was not immediately known.

Details of the meeting were scant. But the session was significant coming days after Ruto was blocked from a trip to Uganda and his Turkish business partner, Harun Aydin, dramatically deported. 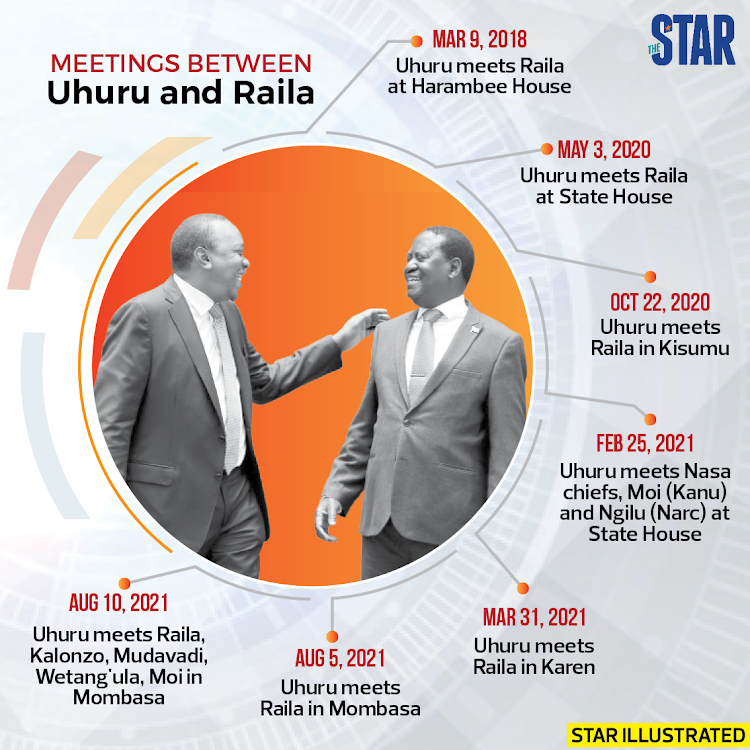 An ally of one of the principals told the Star the talks centred on 2022 succession.

"The brief I have is the discussions were around the 2022 succession and the President opened up his heart on why he wants the principals to unite and work as a team,” an MP aware of the discussions said.

It is understood the President cautioned the five party leaders to avoid public antagonism as witnessed recently and focus on building trust among themselves.

There are concerns the thorny issue of the presidential ticket came up. Uhuru is said to have warned the leaders that they risk losing the presidency to Ruto.

The meeting was the first major gathering of the Opposition leaders with the President after they 'killed' Nasa.

In June, the President also told the Nasa chiefs to unite or forget winning the country's presidency next year. He even suggested he was ready to support them if they settled on a joint presidential candidate.

The President, who spoke when he met a delegation of Ukambani leaders at State House, Nairobi, insisted the strength of the Nasa chiefs remains in their unity, not in going their separate ways.

The meeting was seen as the culmination of the behind-the-scenes efforts by the President to broker a 2022 deal with the opposition leaders. His goal is clearly to defeat his now-nominal second in command.

During the meeting, the leaders also said to have discussed Covid-19 restrictions. The Opposition has pushed for their lifting. They said they want to open the economy.

Lifting the ban on large gatherings would also allow them to hold campaign rallies.

There were indications the President agreed to lift some containment measures to allow for a phased resumption of normalcy and salvage the economy.

The Nasa leaders including Raila, Musalia and Kalonzo have been urging the President to reconsider some restrictions.

The President is expected to announce new Covid containment measures on Thursday during his State of the Nation address.

A dispatch from State House spokesperson Kanze Dena did not provide much detail on the President's meeting with party leaders.

“Among the subjects discussed by the leaders were Covid-19's impact on the country and how to revamp the economy; and the importance of maintaining peace, unity and national cohesion,” the statement read.

The pro-handshake forces are said to be pushing for the resumption of political gatherings as they gear up for the Building Bridges Initiative ruling at the Court of Appeal next week.

They have expressed optimism the court will overturn the High Court ruling that declared the BBI process unconstitutional, illegal, null and void. That would mean the return of reggae and likely creation of more Executive posts to share out.

Ruto has accused the opposition leaders of trying to force the President to endorse them, becoming a serious thorn in the flesh of Uhuru's 2022 succession plans.

Ruto’s perceived growing influence in Uhuru’s backyard – according to highly placed sources - has unsettled the President's inner circle. They want a clear succession plan developed as soon as possible.

The President's allies have insisted said that they are ready to market Raila in Mt Kenya, saying he is the most formidable force to face Ruto.

In Uhuru’s arithmetic, Raila is emerging as the centre of his plan to isolate Ruto, and his possible choice for successor, but some Nasa chiefs are also bidding for themselves.

Raila has been having a larger-than-life presence in government without holding any substantive position. Key Uhuru allies already have openly declared support for the ODM boss.

The President's men are pushing for a coalition of Raila's ODM, Wiper, ANC, Kanu and Ford Kenya.

Mudavadi and Kalonzo have insisted that Raila owes them support since they have backed the ODM leader — who wants to take a fifth stab at the presidency — in previous elections.

Uhuru and Raila have been at the Coast for a few days, meeting to strategise on 2022.

He expressed doubt that Wetang'ula, Mudavadi and Kalonzo would agree to reunite with Raila.

“If they must reunite, then let him [Raila] join us as an equal partner and not be the first among equals,” he said.

Makueni MP Dan Maanzo said Mudavadi, Kalonzo and Wetang'ula would agree to unite with Raila as long as he does not become the flag-bearer.

“If the candidate is Raila, they will not accept it — if that is what he [Uhuru] called them for. I can assure you from what I know, they must have had their own meeting before meeting the President,” he added.

Kalonzo is also keen on going for the top seat and on Monday he launched his 2022 presidential campaign secretariat at the Wiper party offices.

The secretariat called the SKM Command Centre will act as the official communications centre for Kalonzo. He is said to be determined to run.

Raila, on the other hand, has called for an ODM delegates meeting that would make a decision on which coalition to join.

The former Prime Minister is scheduled to have regional delegates meetings across the country after which he will make his political statement on whether or not to join with Oka.

On Monday, reports said that Moi had ditched OKA for Raila Odinga.
News
1 year ago

You can have a party that represents a coalition of interests or parties, each of which represents a single or set of interests
Siasa
1 year ago
Post a comment
WATCH: The latest videos from the Star
by By LUKE AWICH and ALLAN KISIA
News
11 August 2021 - 06:50
Read The E-Paper