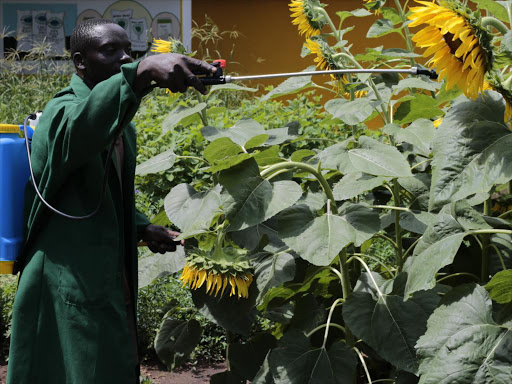 FOOD SAFETY: A worker at the Mombasa showground sprays pesticides in preparation for the ASK on August 14, 2017
Image: / JOHN CHESOLI

Farmers have petitioned Parliament to review EU policy that prompted a ban of the use of some pesticides, before Kenya adopts it.

Led by the Fresh Produce Consortium of Kenya, the National Potato Council of Kenya and the Cereal Growers Association, the farmers have lodged a petition seeking a review and overturning of a recommendation from the parliamentary health committee.

The associations claim that doing so will be catastrophic.

Lobby groups led by the Route to Food wrote a petition to Parliament through the health committee recommending a ban on all agricultural inputs in Kenya that are banned in Europe.

Fresh Produce Consortium of Kenya CEO Ojepat Okisegere, however, said that the committee did not review the EU policies that have led to the bans.

He spoke on Monday during a media briefing as the three associations petitioned Parliament.

Okisegere said Kenya is one of 45 countries that has contested the EU’s input policies and bans through the World Trade Organisation, in a seven-year dispute, number STC 382, in which the EU has been asked to provide scientific grounds for the bans, which it has never done.

“The policies have also been rejected by the US as unscientific and also fly in the face of the world food safety system run jointly by the World Health Organization and the United Nations Food and Agriculture Organization,” he said.

The Pest Control Produces Board was instructed to review the status of every crop protection and public health product banned under the EU’s environmental changes.

The farmers and growers seek a review of the committee recommendations for their impact, arguing there is no merit in bypassing an impact assessment that would certainly have been undertaken to achieve new legislation but has not been commissioned as part of this recommendation.

“We hope with this petition that the government will reconsider where agricultural policy should sit, under what circumstances we adopt foreign legislation, when we act in opposition to our own trade and foreign policy positions, and whether it is right to sacrifice our food security and GDP without any impact assessment at all,” Okisegere said.