Next government will be formed by hustlers — Ruto

The next government will be formed by the hustlers who are ready to face any coalitions, Deputy President William Ruto has said. https://bit.ly/3hWZlid

The next government will be formed by the hustlers who are ready to face any coalitions, Deputy President William Ruto has said.

Ruto said on Wednesday his opponents have realised the hustler movement is unstoppable, hence, they are moving around seeking to form alliances to block him.

“When I told them that the 2022 government will be formed by the hustlers, they thought it was a joke. Now, they have found themselves on the wrong side and are busy in boardrooms seeking partners to form alliances with,” he said.

Ruto was speaking in Machakos town during a meeting with small-scale county traders.

He said his focus was how to improve the lives of the majority of Kenyans who were hustling to put food on the table.

"We are not bothered by political realignments among leaders whose focus is to create positions for themselves. Our focus as the hustler movement is to empower the majority of Kenyans economically," he said.

The DP added that the hustler movement's focus is to change the economic model that would improve the lives of the majority of Kenyans and not a few.

Ruto said the opposition leaders have nothing new to show in terms of development and urged Kenyans to ignore them come the next election.

He regretted that the Jubilee administration had great plans for Kenyans during its second term but was disrupted by opposition leaders who found their way into the government through the handshake.

"As Jubilee party, we had great plans to improve the lives of Kenyans through the implementation of the Big Four agenda—manufacturing, housing, food security, and universal healthcare. But this was disrupted after the opposition joined us,” he said. 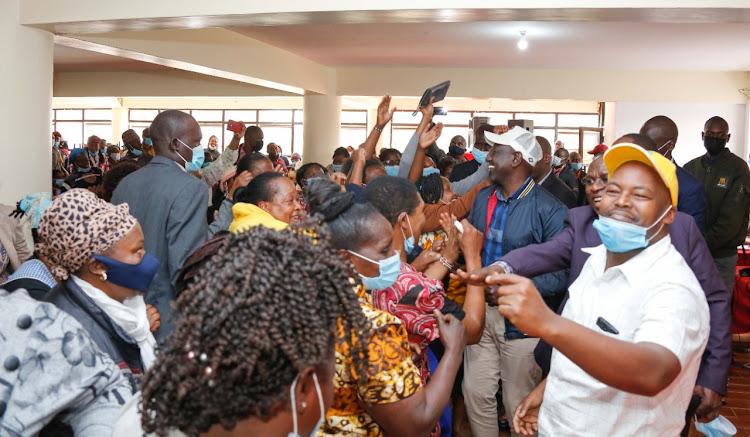 The DP asked the opposition to apologise to Kenyans for disrupting projects that were aimed at improving their lives.

He said the change of economic model from top to bottom-up was the surest way of ensuring all Kenyans uplift their living standards.

The MPs asked the Kamba community not to be misled to support individuals who would end up being in opposition come 2022.

"As Kamba community, we should learn from the past mistakes and support Ruto for presidency so as to be part of his government in 2022," Musyoka said.

The leaders urged Wiper leader Kalonzo Musyoka to consider working with Ruto, noting that he had no place in Nasa.

"Kalonzo Musyoka should know that he has no place in Nasa. We've supported Raila Odinga two times but it seems the former Prime Minister is not ready to support someone else. This is why we ask our brother Kalonzo to join the hustler movement," Munyaka said.

Gachagua told the Kamba community to support the leadership of the DP, saying he was committed to addressing challenges facing Kenyans.

He termed opposition leaders as tribal kingpins who had no time for Kenyans but their selfish interests.

"Raila after the handshake ensured development projects were initiated in Nyanza ignoring other Nasa areas. This shows what kind of a leader he is," Gachagua said.

Report on status of alliance to be presented.
News
1 year ago