•The campaign is targets 3.2 million children after the virus was confirmed to be circulating in Garissa and Mombasa counties

•The polio virus is highly contagious and can cause paralysis and lifelong disability, or even death. 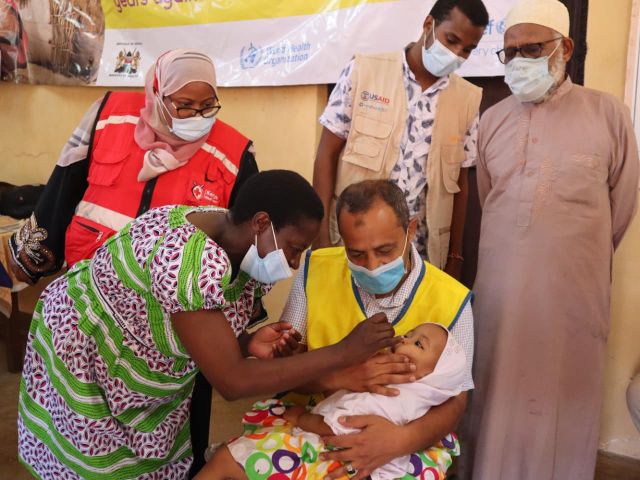 The second polio vaccination drive in 13 high-risk counties is underway with the government targeting 3.2 million children who received their first dose in May.

Residents have been urged to present their children for the second round of the vaccine.

The campaign targets those aged below five. The first round of the drive aimed to reach 3.4 children but reached 3.2, all of whom are targeted with the second dose.

Those who missed out on the first vaccine dose will also get it. The campaign was launched after the virus was confirmed in Garissa and Mombasa counties.

“The government is continuing to take urgent action to stop polio in its tracks and save children’s lives. After a successful first round of the polio vaccination campaign in May, we are now looking forward to finishing this important job in round two this month,” Health CS Mutahi Kagwe said.

He added, “If even one child tests positive for polio, 200,000 other children are considered by the World Health Organization to be at risk of contracting the virus. We must now work together to reach every child in the 13 counties with the immunisation in order to eliminate polio in Kenya.”

Wild polio was eradicated in Kenya in 2014 and is now eradicated worldwide in all but two countries: Pakistan and Afghanistan.

However, another form of the poliovirus that occurs in under-immunised communities with poor sanitation was detected earlier this year by health surveillance teams in Garissa and Mombasa.

This virus mutates in the body of a vaccinated child and is then passed on through their faeces.

This mutated virus can cause paralysis if it infects another child who has not been vaccinated.

Kenya remains at risk of polio due to low immunisation coverage resulting from Covid-19 interruptions, porous borders with high-risk countries and high population movements. Routine vaccination has also been disrupted due to the Covid pandemic.

Between 2018 and 2020, about 300,000 children in the 13 counties identified as high-risk had not had their three rounds of routine polio vaccine.

“Polio poses a damaging and life-long risk to children. Our plan is to achieve and sustain a polio-free world and vaccination is one of our core eradication strategies,” WHO Representative to Kenya Dr Rudi Eggers said.

The poliovirus is highly contagious and can cause paralysis and lifelong disability, or even death.

The Health ministry and authorities in the high-risk counties are urging communities to report any child under the age of 15 who develops sudden weaknesses in their hands and/or legs.

The WHO is also supporting the campaign through operational funds and technical guidance.

The organisation has been at the core of supporting polio prevention through technical support with teams and staff working in the country’s health system to ensure high surveillance standards are kept. This includes doing active case searches in health facilities, monitoring and evaluation, and facilitation of laboratory work.

“Polio is a devastating childhood disease and as long as one child has polio, no child is safe. To eradicate polio, all children in all households must be immunised. UNICEF is urging every family in the affected areas to make sure children under the age of five are vaccinated,” UNICEF Representative to Kenya Maniza Zaman said.

The campaign is being conducted by the government of Kenya with support from UNICEF, WHO, the Center for Disease Control and Prevention (CDC), USAID and the Government of Canada.