Kenya hosts retreat as part of its peace and security mandate at UN, AU

• Kenya's Permanent Representative to the UN  Amb Martin Kimani is leading the delegation comprising of Niger, Tunisia and St Vincent and The Grenadines. 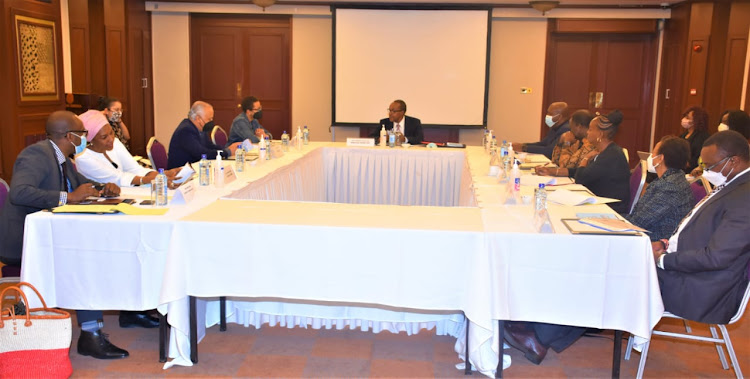 Foreign Affairs PS Macharia Kamau inaugurates the retreat of the UNSC's A3+1 (the block of 3 elected African Members of the UNSC) in Nairobi on July 20, 2021
Image: MFA

The A+3 refers to the bloc of the three African members of the UN Security Council, where Niger, Kenya and Tunisia are its current members. The plus 1 incorporates an additional member of the Caribbean region, presently Saint Vincent and the Grenadines.

The Permanent Observer Mission of the AU to the UN in New York is also participating.

According to the Ministry of Foreign Affairs, the caucus of three African members to the UNSC established in 2013 maintains the UNSC-AUPSC link on shared concerns and to advance Africa’s positions in the Security Council.

“PS Kamau welcomed the visiting delegations of the A3+1, noting, with appreciation that the A3+1 arrangement had become a formidable part of the UN Security Council political workings, in addition to providing a critical platform for the prosecution of Africa’s Agenda – and that of the Sixth Region (the Caribbean) – at the UN Security Council,” Foreign Affairs said in a statement on Tuesday.

Kenya's Permanent Representative to the UN  Ambassador Martin Kimani is leading the delegation comprising of his PR colleagues from Niger, Tunisia and St Vincent and The Grenadines.

PS Kamau said Kenya was delighted to host the retreat to facilitate talks that will reinvigorate and energize the work of the A3+1 and looked forward to the adoption of a common approach to African matters.

This, Kamau said, was vital in the development of lasting working method and capabilities that will provide the necessary protection to the legacy of the A3+1.

The visiting delegates thanked the government of Kenya for demonstrating leadership in the hosting of the retreat, noting that Kenya’s membership of the UN Security Council had been a positive development to the workings and dynamism of the A3+1 in New York, MFA said.

The delegates further noted that Kenya’s membership to the Council had brought the necessary gravitas that allowed for serious engagements and deliberations on African issues at the UNSC.

Kenya to leverage her position as an anchor state in Africa

Omamo said Kenya's membership in AUPSC and UNSC is of importance to the region.
News
4 months ago
by ELIUD KIBII Subeditor and writer
News
20 July 2021 - 12:30