Say the judicial proceedings are dragging yet elections is just around the corner. 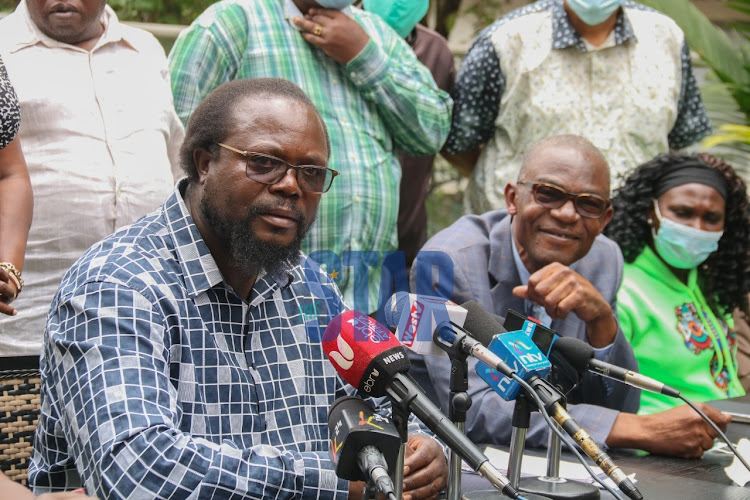 Simiyu and Wamunyinyi said they will not wait for the court to resolve the leadership dispute in the party since the polls are fast approaching.

“We have realised that the court is not a solution to Ford Kenya issues. We will find a political solution to the problems facing the party,” Wamunyinyi said.

Simiyu said members of his faction will start to reach out to like-minded parties for coalition talks ahead of 2022.

“The court is dragging us yet 2022 is just around the corner. We will deal with Ford Kenya problems politically because the courts will not offer any solutions,” he said.

The two declined to elaborate on how they will resolve the wrangles, saying it was their secret card.

They made the remarks in Nairobi after meeting party officials from 30 counties.

Wamunyinyi said that it has been 14 months since Bungoma Senator Moses Wetang’ula moved to court to stop his removal as party leader.

“He obtained conservatory orders but the matter is not moving and 2022 is now here. We cannot wait any more,” the Kanduyi MP said.

Ford Kenya national organising secretary Chris Mandu Mandu, an ally of Wetang’ula, said that they are the bonafide officials of Ford Kenya.

“In any case, it was Eseli who was barred from transacting any business on behalf of the party,” he said.

He said that the party has its headquarters along Ole Dume Road but they are moving it to Riverside.

Ford Kenya fielded a candidate during the Kabuchai by-elections and two other wards, he said.

“If they are claiming to have any powers why didn’t they field their candidates in the by-elections,” he said.

In May 2020, the party’s National Executive Council reportedly resolved to remove Wetang'ula as party leader and replaced him with Wamunyinyi on an interim basis.

The decision was arrived at after the party’s special National Executive Council meeting in Nairobi.

The party’s NEC accused Wetangula of gross misconduct and failing to champion unity in the party.

Other charges levelled against Wetang’ula included failing to reconcile warring members to eliminate friction in the party.

The former Minority Leader in the Senate was also accused of failing to provide inspiring leadership to the party.

Wetang'ula moved to court and obtained orders stopping his removal pending hearing and determination of the matter.

The court further barred Wamunyinyi from convening the party’s National Delegates Congress. The decision allowed Wetang'ula to retain his seat as the party boss and restrict the rival team from holding NDC which would ratify his ouster.

On Tuesday, Wamunyinyi said their first step would be to open party headquarters in Nairobi.

“We will urgently open party headquarters in Nairobi. The lease that we had for the headquarters expired and the landlord was not keen to renew it,” he said.

“It should be noted that he attends the One Kenya Alliance meetings as Wetang’ula and not as Ford Kenya party leader. He is in those meetings as an individual and not a Ford Kenya representative,” he said.

He further said they will embark on countrywide tours to meet aspirants who want to vie for various positions on Ford Kenya tickets.

He accused Wetang’ula of not been interested in prosecuting his case at the court.

“Our attempts to fast-track matters in court have not been successful. We will not wait for the court,” he said.