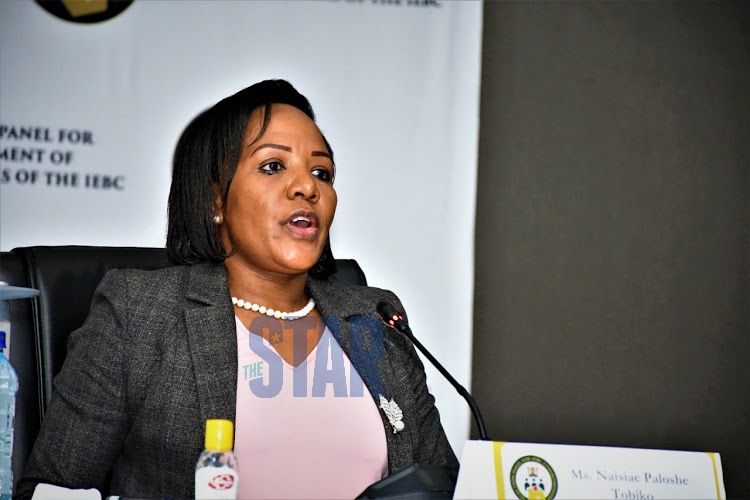 IEBC candidate Naisiae Paloshe Tobiko before the selection panel for appointment of commissioners of IEBC at KICC on July.19,.2021.
Image: /EZEKIEL AMING'A

IEBC commissioner candidates on Monday vowed to ensure the electoral agency is not penetrated by political interests ahead of the 2022 elections.

The candidates who appeared before the vetting panel chaired by Elizabeth Muli said it will take team work at the electoral agency to ensure it remains non-partisan.

Murshid acknowledged that there will be attempts to influence the Commission’s decisions by the political class but the same will not be tolerated if he gets the nod of the vetting panel and is eventually appointed by the President.

“There will always be attempts to encroach on the independence of IEBC, we will not allow any kind of political interference. I have never been politically influenced,” Murshid told the panel.

Lokuruka said he will contribute to restoration of public trust in the agency which has suffered years of mistrust.

“We will first identify problems causing public mistrust and address them as a Commission, if we cannot win public trust then we shall invite apathy,” he said.

Tobiko – who is an IEBC insider having worked in various capacities in the Commission for the last 11 years – said the electoral agency should have stable leadership not very close to elections to avoid a repeat of what happened in 2017 polls where commissioners joined months to elections.

She also cautioned against the bashing of the electoral agency after every election, saying it is counterproductive.

“It is not just enough to bash IEBC but also let's get a pat on the back for the little things we do well,” Tobiko said.

She is currently the manager in charge of the Commission Services.

She said observers should be assured of their security within the polling stations.
News
3 weeks ago

A member of the panel Dr. Dr. Faradim Abdalla requested to know why Lokuruka, a professor in food Science, had not seen it appropriate to involve himself in government efforts to establish a blue economy and fish processing factories in the country.

“With your qualification in fish processing, are you aware that the Kenya government has set up the blue economy and is putting up food processing factories around the country? Did you offer yourself to the fish processing exercise ongoing in the country?” Abdalla posed.

In his response, Nakuruka said he is available to offer his expertise when called upon, adding he has done his bit in the development of the fish industry in the country.

“Before I came to PSC, I consulted; I had a discussion if they needed my help. I have colleagues there who know the expertise that I have and they can consult,” he said.

The former PSC Commissioner also told the seven-member vetting panel chaired by Elizabeth Muli that he will ensure the public has confidence in the electoral body if approved by the team.

Murshid was questioned over his 2018 decision to apply for an IEBC commission’s job when he still had a running contract with the National Police Service Commission (NPSC).

“If you are given this job, please assure this panel and Kenyans that you will not quit midstream?” Muli posed.

In his response, Murshid gave an undertaking to complete his term at the electoral commission if considered.

'If a governor spends over Sh400 million, it means he will seek to recover that money' - Nunow.
News
4 weeks ago

Chiggai struggled to understand and answer a question posed by interview panel in Kiswahili.
News
3 weeks ago

Jaoko said Swahili was not given much attention during her days in primary school.
News
3 weeks ago
by LUKE AWICH Political Reporter
News
19 July 2021 - 16:03