Also allegedly drew allowances and honoraria totalling Sh844,500 after the expiry of his term.

• The audit report further reveals that the chairman continued to draw sitting allowances and honoraria (special pay for board chairs) to the tune of Sh844,500 after the expiry of his term.

• Gathungu however argues that the chairman’s term ended and all the cash held at the Fund’s bank account were transferred to the Central Bank. 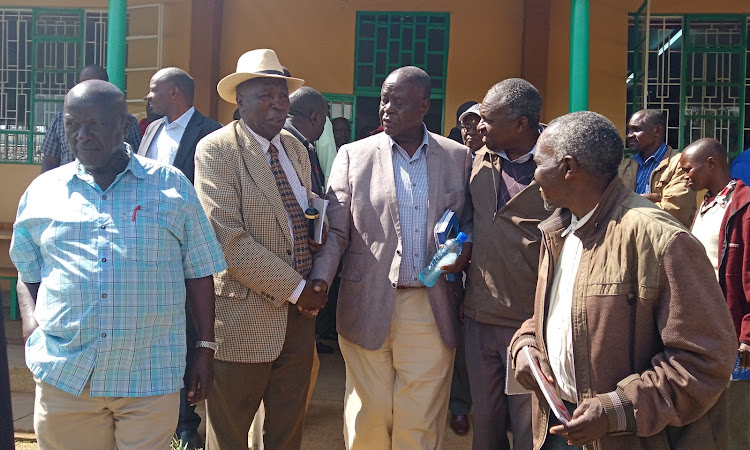 Chairman of the Strategic Food Reserves Fund Noah Wekesa (centre) during a past meeting with farmers in Eldoret.
Image: MATHEWS NDANYI

Former Wildlife Minister Noah Wekesa is on the spot for failing to surrender a motor vehicle bought at Sh14.5 million when he was chairman of the Strategic Food Reserve Fund board.

A report by Auditor General Nancy Gathungu says the vehicle was bought in May 2019 and assigned to the former Kwanza MP.

However, at the expiry of his term in October 2019, Wekesa did not surrender the motor vehicle.

“Although the fund had written to the chairman requesting him to surrender the vehicle, it was not presented for audit inspection and its existence and status could, therefore, not be confirmed,” Gathungu said.

The audit report further reveals that the chairman continued to draw sitting allowances and honoraria (special pay for board chairs) totalling Sh844,500 after the expiry of his term.

“The appointment of the chairman lapsed on October 20, 2019 but he continued to receive sitting allowances and honoraria from the Fund irregularly,” Gathungu said.

Wekesa and his team were sent packing by Treasury Cabinet Secretary Ukur Yatani on March 19 last year, following a directive to wind up the SFR issued by the Head of Public Service Joseph Kinyua.

Activist Okiya Omtatah challenged the government’s decision to wind up the fund and secured orders to restate the board in November last year.

Gathungu however argues that the chairman’s term ended and all the cash held at the Fund’s bank account were transferred to the Central Bank.

She adds that the fund is no longer getting money from the exchequer.

The state sought to wind up funds on grounds of its incessant row with the National Cereals and Produce Board.

In the review of the funds’ books of accounts for the year to June 2020, Gathungu said SFR’s ability to sustain services to the public is doubtful following the unsettled matter.

She said the fund is operating without a secretariat after its chairman’s term lapsed in October 2019 while the fund manager was recalled to the Devolution ministry.

The auditor further flagged an unsupported expenditure of Sh1.6 million.

Neither the board attendance register nor minutes of meetings were provided.

“In addition, an expenditure of Sh547,000 was not supported by payment vouchers,” the audit tabled in Parliament last month reads.

The cereals board was found to have sold maize worth Sh7.5 billion with an expired agreement.

Gathungu said the agreement that NCPB relied on was entered into in October 2016 and was to last two years.

“The NCPB is indicated to have sold maize while relying on an unenforceable agreement,” the auditor said.

“No documentary evidence was provided to support the quantity of maize that was allocated to various millers and government institutions, including minutes of approval by the board,” the report says.

The audit further flagged an expenditure of Sh782 million on handling costs on sales and commissions normally 10 per cent of the sales figure.

“However, no documentary evidence was provided on sales of maize or the handling charges. The validity of the expenditure, therefore, cannot be confirmed.”

Payments of Sh12 billion for maize imports (by SFR Fund) could not be confirmed, Gathungu said, further questioning an extra Sh2.5 million used by NCPB to settle storage and fumigation arrears.

She holds that officers understated the number of bags by 88,945, resulting in an overstatement of the closing stock of bags, average stock, and storage charges.

The fund has been reprimanded for preparing faulty financial statements contrary to the requirements of the Public Sector Accounting Standards Board.

Details about the management team were omitted, no depreciation charge was made for the motor vehicles procured in the year nor did the management prepare a fixed assets movement schedule.

The SFR management did not disclose the prior year audit queries, which progress updates should be provided.

Also flagged is the whereabouts of milk powder at Sh700 million which the fund paid to the new KCC.

New KCC was to purchase surplus milk from farmers for the establishment of a strategic reserve of milk powder.

Gathungu revealed that although new KCC received the funds, it was not holding any stocks of milk powder on behalf of the SFR as of June 30, last year.

The board was dissolved in May through a legal notice issued by the National Treasury
News
8 months ago
by MOSES ODHIAMBO Political Writer
News
19 July 2021 - 23:00