• Andole represents Morara Omoke, who filed a cross appeal against sections of the High Court judgment delivered in May.

• Andole argues that the five-judge bench at the High Court erred in law when they failed to order the president to refund the funds used in the BBI process. 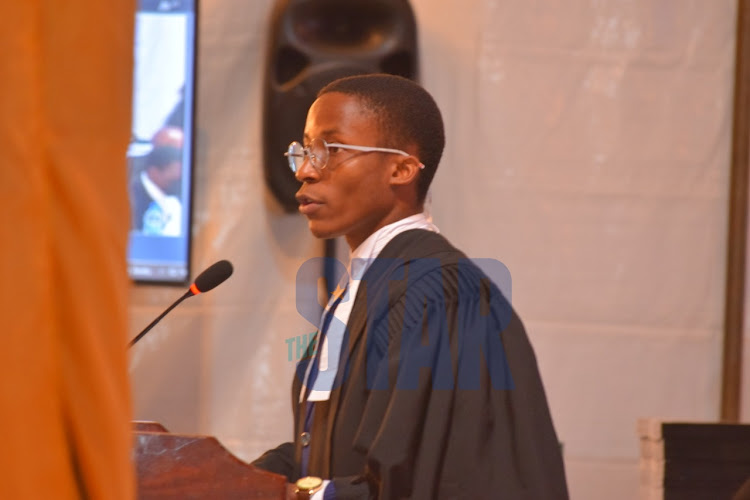 Christian Andole, the first respondent at the BBI Appeal hearing, makes his submission at the Court of Appeal on July 2, 2021.
Image: CHARLENE MALWA

On the fourth and final day of the BBI appeal hearing on Friday, lawyer Christian Andole urged the seven-judge bench to order President Uhuru Kenyatta to personally refund taxpayers' money used in the alleged illegal process.

Andole represents Morara Omoke, who filed a cross appeal against sections of the High Court judgment delivered in May.

Andole argues that the five-judge bench at the High Court erred in law when they failed to order the President to refund the funds used in the BBI process.

“The High Court’s finding and declarations were sufficient for an order to make good the loss of public funds; no evidence was needed for that order to be made,” Andole said.

“I also invite the court to look at the doctrine of public trust which is anchored in Article 73(1) and Article 1,” Andole said.

“I am afraid the liberties of Kenyans will be suspended by a thread so slender than the hair strand that held the sword of the imperial King Dionysius over the head of Damocles,” he said.

On the issue of who initiated the popular initiative, Andole says there is a clear delimitation of who serikali is and who mwananchi are.

“My Lords and Ladies, the grave digger in Langata, the shoe shiner at Upper Hill, the beach boy in Watamu, the pregnant woman in Pumwani these are the people; these are the wananchi not a person bearing the title honourable or his excellency,” Andole says.

He submits that any persons bearing a title honourable or his excellency purporting to be the people or mwananchi is a wolf in sheep’s skin.

Andole has accused the BBI team of lying to the court on who initiated the BBI initiative by saying it is Dennis Waweru and Junet Mohamed.

He told the court that the Attorney General in one of the court documents said the initiative is the BBI initiative, which is a voluntary alliance of political parties.

“There have been conflicting narrations of who is the promoter or the initiator of BBI to that extent the exact finding that the court should have is whether the appellants have approached this court with clean hands to warrant upsetting the decision of the High Court,” he said. 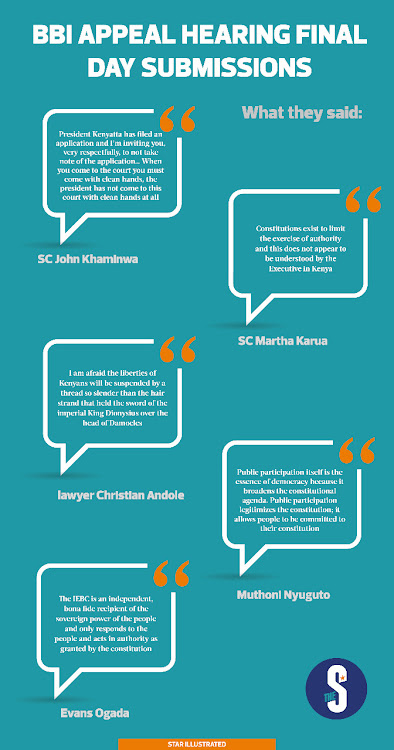 Mutuma has dismissed the submissions that Junet, Waweru are BBI promoters.
News
6 months ago

Appeal hearing: Havi says Uhuru not a 'mere mortal' to engage in BBI