Sh4bn may have gone down the drain at KPA 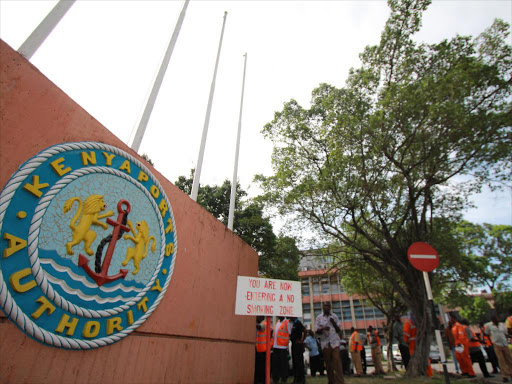 The report reveals that unscrupulous managers could be taking advantage of weak controls management of overtime, continuous repairs, and tenders to fleece the authority of billions.

The authority has been grappling with graft cases, the latest where former managing director Daniel Manduku was charged with the suspected loss of Sh2 billion.

Among issues flagged in the report for the year ending June 2019 is that KPA may have inflated the costs of manufacture of concrete barriers by Sh832 million—or Sh67,000 per barrier.

Whereas the bills of quantities showed that the 1,380 barriers required 5,778 cubic metres of concrete to manufacture, translating to 4.2 cubic metres per barrier.

But a physical verification revealed that each barrier was 0.65 cubic metres, hence the cost should have been Sh151 million and not the stated Sh983 million—partially delivered and serviced.

Gathungu holds that the accounting officer may have committed an offence for commencing procurement without a budget, and for excessive procurement of items.

Also queried is an unsupported payment of Sh96 million for various tournaments —both locally and overseas—by 11 different teams of KPA.

Management did not provide details of how the players were selected to participate in the tournaments, and how the subsistence allowances were determined.

KPA further paid staff Sh17.6 million to attend football matches of Bandari Football Club raising questions on why the authority issued imprest to staff in football cheering team yet the club has its own budget.

Also flagged is Sh33.9 million that was paid to two different vendors for the transfer of containers within KPA premises but charged to development studies.

Gathungu downplayed the explanation by management that container transfer was done on behalf of Kenya Railways as there was no evidence of request from KRC.

“Details of the number of containers moved, the dates it was done and equipment transporting the containers were not provided to confirm the amount charged.”

Also revealed was that KPA purported to import overalls from Canada at Sh47 million (Sh6,475) yet sourced the same locally at Sh16.8 million (Sh2,325).

A physical verification revealed that the overalls had a local manufacturer’s label hence the authority overpaid the supplier Sh30 million for locally made overalls.

KPA also paid Sh208 million for waterproofing works at headquarters yet no details were provided to show how the contractor was selected from the list of contractors.

“An inspection revealed that a section of the roof appeared unrepaired and was leaking whenever it rained hence the value for money on the repairs could not be confirmed,” the auditor said.

In this respect, Gathungu said the project cost of Sh961 million and Sh267 million incurred by the Transport ministry in regard to the same could not be confirmed.

Some works to the tune of Sh153 million touted as emergency works in respect of the presidential launch of the Lamu Port could not be verified.

Of the amounts, it was revealed that Sh45.6 million was used to clear bushes and parking, Sh15.9 million on access roads, Sh1.3 million for a temporary police camp, and Sh2.7 million for plaque stands.

“It is not clear why works costing Sh51 million were financed and disclosed as part of the KPA assets,” Gathungu said.

The audit has further revealed instances of irregular payment of acting allowances where some 17 employees were paid nearly Sh2 million for serving in acting positions for more than six months.

Some 14 employees undertook special duties for more than six months and were paid Sh714,000 contrary to the KPA HR manual.

Gathungu further took issue with payments of bonuses to employees to the tune of Sh477.2 million, without an individual evaluated performance review.

KPA also stands to pay Sh40 million in hospital bills of one employee’s dependant following the suspension of requirements that medical benefits be subject to limits set by the board.

No ministerial approval was provided to okay the removal of the limits, whose suspension also saw the cost of medical insurance rise by Sh5.7 million.

KPA further overpaid Sh41 million as third shift allowances to employees contrary to the CBA which states that the third shift is regarded as a normal shift compensated at 15 per cent of basic monthly pay.

“The propriety and validity of the allowances of Sh368 million couldn’t be confirmed,” the auditor said, further revealing that Sh101 million was paid as overtime allowances to employees on training grades.

Also queried is the expenditure of Sh1.4 million for two officers whose purpose for a visit to China and the USA were not disclosed.

Then-Transport PS Esther Koimet requested KPA to facilitate air tickets and subsistence allowance for the two officers who later extended their stay for seven days and were paid Sh821,725.

The auditor raised concerns that no documentary evidence of travel and the source of funding was not made available for her review.

KPA was also found to be in breach of the two-thirds gender rule in the face of findings that 79 per cent of its workforce were male and 20 per cent female.

The Public Service Commission HR manual posits that the government will ensure not more than two-thirds of positions are filled by either gender.

Also flagged is the payment of Sh23.5 million to companies in the DRC and Burundi for media services. No evidence of competitive bidding was provided for audit review.

KPA acting MD Rashid Salim says they are on course to beat a two-year record February performance.
Counties
1 year ago
Post a comment
WATCH: The latest videos from the Star
by MOSES ODHIAMBO Journalist and Political Writer
News
01 July 2021 - 05:00
Read The E-Paper