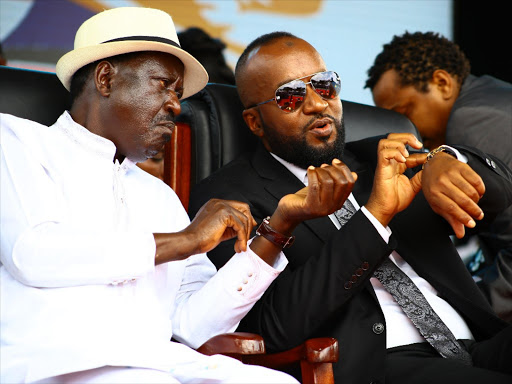 The ODM-Jubilee 2022 alliance move could jolt plans by Mombasa Governor Hassan Joho to make a successful debut in the presidential battle next year.

It has emerged Governor Joho will have to surmount hurdles analysts say could bog him down in his bid to succeed President Uhuru Kenyatta.

From questions about his academic papers — which he has brushed off — to challenges in firming up his grip of the Coast region, Joho has an uphill task.

The flamboyant 45-year-old politician has announced he is ripe for the country's top job.

Joho has often beaten rivals at their own game, rising from a one-term Kisauni MP to a two-term governor with massive influence and following at the Coast.

He is said to have embarked on local and internal offensives to build a political and financial war-chest to take on the big boys in the presidential race.

Last Friday, he said his focus is beyond Mombasa politics and he will be seeking a 'higher office' in 2022. “I have done enough during my two terms as governor. Now I will leave the office next year and move to the higher stage of national politics".

However, clinching, the ODM  ticket remains one of his biggest nightmares.

Analysts say Joho faces an uphill task to wrest the ODM ticket from Raila, whose confidants say his moment of glory is nigh. Joho is a deputy in ODM, while Raila is the boss.

While there is a feeling within some ODM members that the party should re-brand to attract the younger generation by fielding a youthful candidate, another team believes Raila is the man to beat.

However, it is the recent move by allies of President Uhuru Kenyatta and Raila to announce a plan to craft a 2022 political alliance that perhaps could further handicap Joho's bid.

The crux of the matter is that Uhuru-Raila teams are scheming to field a single presidential candidate next year, upsetting Joho's game plan.

To make matters worse, the President has declared he would pick one of the National Super Alliance principals as his successor. Joho is not one of them.

Former Cabinet minister Franklin Bett says while Joho's influence cannot be ignored, he could be raising stakes for a deal with the front runners.

“Personally, I don't think Joho is keen on seeking the ODM ticket because that belongs to Baba (Raila). However, as a politician, he is skyrocketing the price tag for negotiations,” Bett said.

The politician said the changing political dynamics in the country and the waning prospects for a Building Bridges Initiative referendum could have forced Joho to push for a higher bargain.

Within ODM, it was alleged that the decision by the party top brass to cancel the presidential nomination process was a result of fears that without Raila on the ballot, the party would be 'hijacked' by external forces.

Kakamega Governor Wycliffe Oparanya, who alongside Joho are the two ODM deputy party leaders,  submitted his papers as well.

Homa Bay Town MP Opondo Kaluma has told those who are expecting not to meet Raila on the ballot come 2022 that they are in for a surprise.

There have been claims of a cold war in ODM pitting top officials said to be determined to vanquish Joho's ambitions, especially those from Raila's Nyanza backyard.

Raila enjoys near-fanatical support in his turf but Joho's presidential hopes appear to have rattled some party stalwarts.

It is on this background and months of internal wars that Joho last week hosted Raila in Mombasa and, before the ODM boss, hinted at higher ambitions.

Joho is among the few governors who have had to publicly defend their academic qualifications. Despite, that, he says he holds two bachelor's degrees from separate universities —  one from Kampala International University in Uganda and another from Gretsa University.

In 2017, it was alleged that Joho was admitted to the University of Nairobi for a Bachelor of Commerce using a forged examination result slip that showed he had obtained a C+ aggregate grade in 1992.

Joho was said to have instead scored a D- in the KCSE exam at Serani in 1993.

Should the certificate issue re-emerge, then Joho faces another hurdle in his push for the presidency, which requires a qualification of a university degree.

However, Joho's chief of staff Joab Tumbo said there are clear and established processes to vet academic certificates that will apply when that time comes.

The official said Joho has started preliminaries to secure the ODM ticket for his presidential bid and if the issue of certificate arises, the party will handle that.

"We have gone through the mechanisms and have handed in our nomination papers. ODM has a mechanism of vetting those papers and I hope we will go through," Tumbo said.

He said Joho is focused and having his 'eyes on the ball' for the ODM ticket.

Secondly, he will have to fight off the 'enemy' tag after some ODM leaders got increasingly edgy about his presidential ambitions, which they claimed had outside forces.

Moreover, Joho will also be forced to clear the air the award of the standard gauge railway freight terminal tender, which led to massive losses of jobs at the port of Mombasa.

A petition was lodged in Parliament last month by locals dissatisfied with the deal.

Furthermore, his past alleged links —which he has vehemently denied- with drug trafficking cartels may avail political fodder to his detractors and is also likely to scare his associates and financiers.

There have been adverse effects of narcotics in the Coast region associated with drug trafficking, and although his critics link him to the mess, Joho has denied any involvement.

At the height of the claims by Jubilee leaders in 2017 that they would arrest him, Joho said it was a scheme to sabotage his political career.

“They did the same in 2013 and I kept quiet. But this time around, I will not shut up; I will engage them because nobody can intimidate me. I am also a man and will fight for myself,” he said then.

The governor added that his county government had done more to fight drugs than the national government.

“We have more than 600 addicts at a rehabilitation centre and we have made more arrests of drug dealers than the national government,” he said.

Joho recently held a business trip to Morocco to market business and investment opportunities available in Mombasa. It was also seen as part of his plan to create political and financial networks.

Joho who was accompanied by Mustafa Ramadhan, the Mombasa chamber of commerce chairman held high-level business meetings with Morocco investors who promised to support him in 2022.

“It is obvious that any serious presidential contender must build local and international links. Joho is no exception as he must seek strategic partners as well,” said a senior politician aware of the details of Joho's trip.

There are reports that the governor was wooing business investments that would see Arabs invest heavily in Mombasa especially in the blue economy and at the Port.

However, details of the trip that his allies have branded successful but disputed by critics have not been made public.