After hours of waiting, hospital staff told them there are no vaccines.

• They got to KNH Mbagathi for their Covid-19 jabs but, after hours of waiting, hospital staff told them there are no vaccines.

• On Wednesday, the Kenya Medical Practitioners, Pharmacists and Dentists Union raised concerns over the lack of enough Covid-19 vaccines for second jabs. 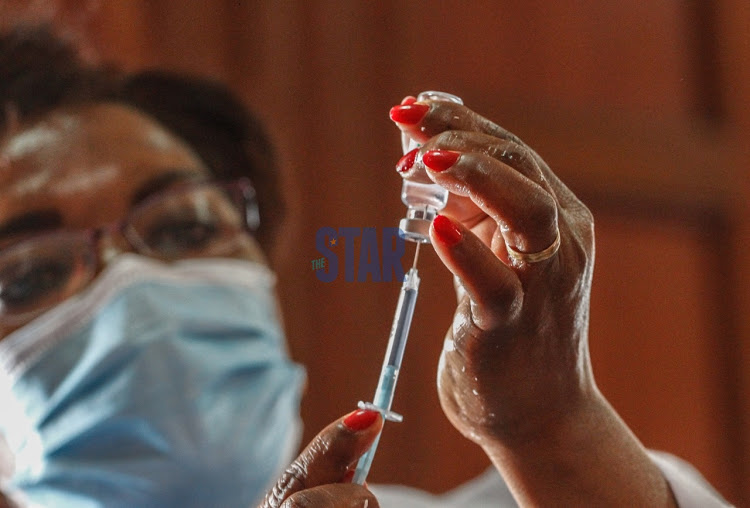 A Ministry of Health staffer holds the AstraZeneca Covishield Vaccine before vaccinating a staff at the Milimani law Court on Mach 24, 2021.
Image: ENOS TECHE

There were frustrations and anger after a section of Kenyans who went to get their second jab missed it at the Mbagathi hospital.

They got to KNH Mbagathi for their Covid-19 jabs but, after hours of waiting, hospital staff told them there are no vaccines.

In a clip posted by NTV on Thursday, the frustrated lot could be seen arguing with one of the nurses in the facility.

“You have asked me if it is true you received the message…and I have said the message is coming from the Ministry of Health,” the nurse is heard saying.

But an angry Kenyan who was talking to the nurse claimed that the nurse had told them to go back to the ministry for an explanation.

“You said we should go and ask the ministry… who is your employer? Are you not under the ministry of health?” He posed.

But the irritated nurse immediately left with a security lady to prevent the angry crowd from questioning her further.

However, others were heard complaining in whispers on why the ministry was sending such messages and not fulfilling their part of the ordeal.

“…they sent the messages..let them say there are no vaccines.. these vaccines are now being sold somewhere else,” one could be heard saying.

Another said “How do you tell people to come and then there are no vaccines? These people like jokes.”

On Wednesday, the Kenya Medical Practitioners, Pharmacists and Dentists Union raised concerns over the lack of enough Covid-19 vaccines for second jabs.

The doctors' union said that there is an "extreme shortage" despite receiving communication to go for the second doses at designated health facilities.

The union went on to ask for clear communication on the matter from the Ministry of Health.

This comes a few weeks after Health CS Mutahi Kagwe announced that the duration between the first and second dose had been revised by up to four weeks.

The MoH later announced that the second round of vaccinations against Covid-19 would begin in June.