Says none of the justice agencies operates in a vacuum. 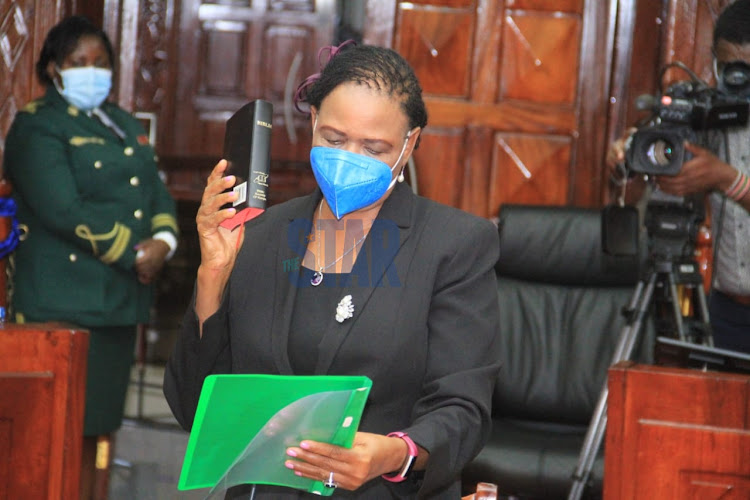 Justice Martha Koome during vetting by members of the Justice and Legal Affairs Committee in Parliament on May.13,.2021.
Image: EZEKIEL AMINGA

Chief Justice Martha Koome has said there is no weak link in the justice sector when it comes to corruption cases.

The Executive has always pointed an accusing finger at the Judiciary as being the weak link in the fight against corruption.

However, in her speech during the launch of the ODPP Excellence Charter on Tuesday, Koome said the days of pointing out who among the justice actors is the weak link are gone.

Her statement was read on her behalf by Court of Appeal president Justice Daniel Musinga.

“None of the justice agencies operates in a vacuum or as a silo. For us to tackle delays in the delivery of justice and bridge gaps that arise in cases, we will need to work in tandem with each other,” Koome said.

The Chief Justice further said inter-agency cooperation is important in the criminal justice chain and they need to restore confidence in the justice system by playing their respective roles diligently.

“As I have said before, justice runs like a chain and we are only as strong as our weakest link,” she said.

Koome further raised concern over the quality of investigations and prosecutions by the DCI and DPP.

She noted that the complex corruption cases that are taken to court are defended by senior and experienced counsels who are very well paid, hence the need to also equip prosecutors with skills and watertight evidence.

“The courts will continue to be guided by the law, evidence and the facts presented before them in reaching their findings,” she said.

Koome advised the DPP to equip the prosecutors to enable them carry out their mandate of instituting and undertaking prosecution of criminal matters with competence.

“Given the very complex nature of criminal activity, corruption, organised crime and transnational crimes, there will be a need for renewed focus on innovation and appropriate responses to the emerging trends,” she said.