• The exchanges expose the edgy relationships that exist between the two camps that are the key players in the devolution arena.

• According to the Constitution, senators are charged with overseeing the county governments' work and protecting the interest of the counties. 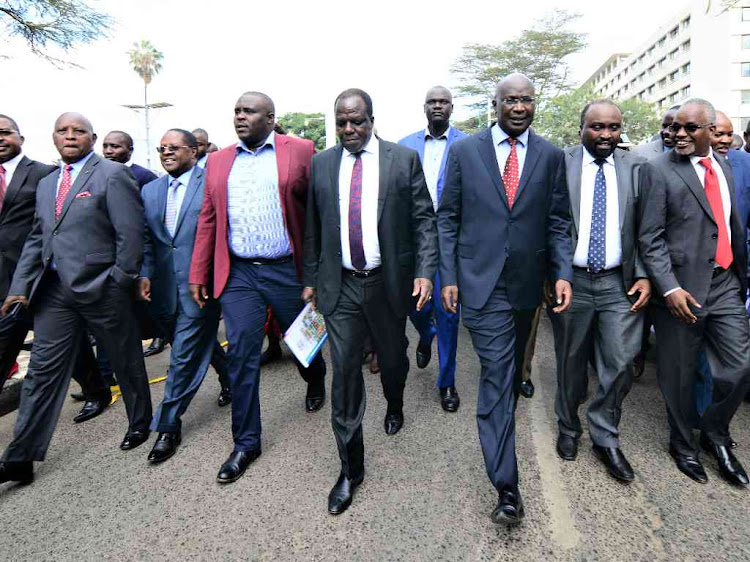 Governors and senators march to the Supreme Court to seek judicial intervention in interpreting Division of Revenue Bill, 2019, on July 15, 2019.
Image: FILE

Senators and governors are trading barbs over the management of county billions in a war apparently linked to next year's election.

The county bosses are accusing the senators of using their oversight mandate to intimidate, discredit and advance their political agenda to succeed them.

Through the Council of Governors, they say that "overzealous senators" are using audit reports to extort money and run a smear campaign against them.

“We're very concerned senators are using audits report generated by your office as their campaign tools. This is more prevalent in counties where senators are harbouring gubernatorial ambitions,” CoG chairman Martin Wambora says in a letter to Auditor General Nancy Gathungu.

The letter is copied to Senate S peaker Kenneth Lusaka.

But the lawmakers have hit back and accused the county bosses of presiding over 'high-value' theft and engaging in nepotism and tribalism, among other vices.

They have vowed to "tighten vigilance", especially during the last financial year to the polls, claiming that most governors could be amassing wealth to enable them to campaign for reelection or seek higher elective seats next year.

“There is a lot of misappropriation that is going on in our respective counties. We need to be keen on how our county governments are appropriating funds in this financial year,” Kakamega Senator Cleophas Malala said.

The exchanges exposed the edgy relationship between the two teams, both of which are key players in the devolution arena.

The Constitution mandated senators to oversee the county governments' operations and protect the interest of the devolved units and their administrations.

The lawmakers have accused the governors of attempting to avoid accountability. The county chiefs have, conversely, taken on the senators, accusing them of blackmail, intimidation and selfish political agenda.

At least 20 senators have declared their interests in the governor seats—either to succeed those completing their second terms or unseat those serving their first terms.

During a debate last week, senators took issue with governors’ letter to the auditor general. In the letter, the CoG implored Lusaka to rein in the senators if they are to continue to appear before House committees.

“Some of these senators are discrediting our administrations and sadly using a report on the utilisation of Covid-19 pandemic funds for a smear campaign, our recent appearance before the committees on Health and County Public Accounts and Investment has confirmed our fears,” it reads.

The Health committee is currently grilling governors on the spending of Covid funds, while the CPAIC panel is interrogating the usage of billions of taxpayers’ money disbursed to the devolved units by the National Treasury.

But the senators dismissed the governors’ allegations as part of a wider plan to evade accountability.

“I agree that this being the last financial year we should not only be looking at the second-term governors, even first-time governors are also plundering for campaigns for their second term,” Nandi's Samson Cherargei said.

Kitui's Enock Wambua said corruption seems to have become one of the devolved functions, regretting that it is being perpetrated by county governments almost without exception.

“I come from a county, Kitui is arguably one of the counties that are topping the charts in terms of corruption perpetrated by the county government,” Wambua said.

“This corruption is not just about governors who are preparing to leave office on their second term. In fact, it is a lot more pronounced among governors who are trying to accumulate wealth to run for re-election.”