FOUR MONTHS ON, NO TRACE

• The man through his lawyer has filed an affidavit before Kibera chief magistrate Joyce Gandani.

• He says the vehicle is registered under his name and he had helped the lawyer the day he was abducted. 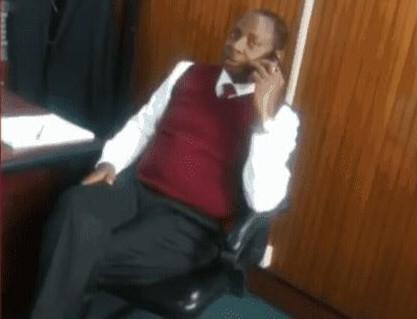 A man alleging to be a close friend of city lawyer Benson Njau has claimed ownership of the car the advocate was using the day he went missing in February.

Jackson Mbuva Kimuyu claims Njau was using a Toyota Fielder registered under his name. In an affidavit, he told a Kibera court that on January 7 the 54-year-old lawyer requested the vehicle to run personal errands.

However, at around 7pm on February 7, he received a phone call from another friend who had spotted the car along Muhoho Road near DCI Training School in South C, Nairobi.

He states that the information forced him to report the case of a missing vehicle and proceeded to the spot where the car had been towed.

Later, he learnt that his friend Njau was missing. Njau has not been found to date and no arrest has been made. The motive of the incident has also yet to be established. Meanwhile, investigations are underway.

Kimuyu says the lawyer could have been in the vehicle and could have been hijacked near the spot where it was found and forced into another vehicle. He wants the car released to him and has sought court orders. He told magistrate Joyce Gandani that he has been frequenting the station seeking its release, but the police have declined.

Kimuyu says he had been using the car for personal business, hence its detention is illegal as it might be vandalised at the station that would depreciate its value. He suggested that investigating officers photograph and release the vehicle, saying such a move would not interfere with investigations.

An investigator, however, said Kimuyu had hired out the car to Njau, but there was no contract agreement or receipt to indicate payment.

Given that the lawyer is still missing and the matter is still under investigation, Kimuyu and the vehicle are subject to inquiry and he could be charged, the officer said.

The magistrate directed that the matter be heard on June 16.

The Law Society of Kenya had urged the police to expedite the investigations. It threatened legal action if he is not produced.

Police reviewed CCTV footage that captured Njau's last moments. His car was abandoned on the road after it was blocked by two other cars before he was dragged out and taken away by unknown people.

He had left his house in South C for an unknown destination when he was blocked and moved to another one that was waiting. He did not seem to resist the abduction, those who viewed the footage said. According to witnesses and police, the incident happened at about 5.30pm.

His family has not been contacted for a ransom or any other demand. Njau had been embroiled in a land payment dispute. It has not been established whether it had something to do with his abduction. A charge sheet said he stole money entrusted to him for the sale of a plot in Ruiru.

A court had issued an order against him after Njau failed to repay the money after two years. But the lawyer requested the court to grant him more time to settle the matter out of court.

Among those who witnessed his abduction were boda boda riders who told police they thought he was a suspect who was being arrested.

Njau had a Mercedes Benz, which he did not use that day. It was parked at his house, which was intact when the police and his family visited.

LSK secretary Mercy Wambua had called upon anyone with any information that can aid the investigations to forward it to them or report to the Lang’ata police station or the nearest police station.

“As the professional body tasked with ensuring the welfare of our members, we note with grave concern the extensive delay in the conclusion of investigations into the disappearance of our member,” she said.

She said delays in the case had caused great anxiety and triggered speculation and suspicion.