Says this will give a lifeline to the many suffering Kenyans

• Raila said most Kenyans have lost their businesses and other investments due to Covid-19.

• Raila said the March 2018 handshake between him and Uhuru has borne fruit. 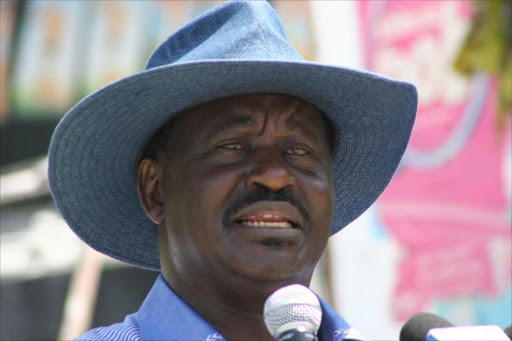 He urged President Uhuru Kenyatta to ensure the programme is implemented immediately to cushion Kenyans who are suffering from the effects of the Covid-19 pandemic.

"The nation is in dire need of economic stimulus programmes to give a lifeline to the many suffering Kenyans. We must also encourage our people to embark aggressively on farming," Raila said.

He spoke in Kisumu on Tuesday during Madaraka Day celebrations.

Raila said most Kenyans have lost their businesses and other investments due to Covid-19.

"We have had the Kazi Mtaani programme, which has achieved a lot, but we now have to also take up farming across our villages under Farming Mashinani," he said.

Raila said the March 2018 handshake between him and Uhuru has borne fruit.

"I believe everyone in this country has seen the benefits of our cooperation. This is not something that we need to explain to you anymore," he said.

Nyanza, Raila's support base, has benefited from multi-billion shilling development projects since 2018.

Raila said the problems afflicting the country such as poverty, illiteracy and be addressed in an environment of disunity.

"It is on the realisation of this fact that we have decided to unite the country through the Building Bridges Initiative that I strongly believe should go on," he said.

Raila said the BBI initiative was meant to steer the country into a path of reform and a new beginning for Kenya.

"We are on a new journey. We are more determined to fix this country and correct the ills of independence that have bothered this nation for decades," he said.

"On this journey, we require unity, without which we cannot succeed. This was the reason for the handshake."

Raila said if the BBI dream succeeds, the woes facing the country would easily be fixed.