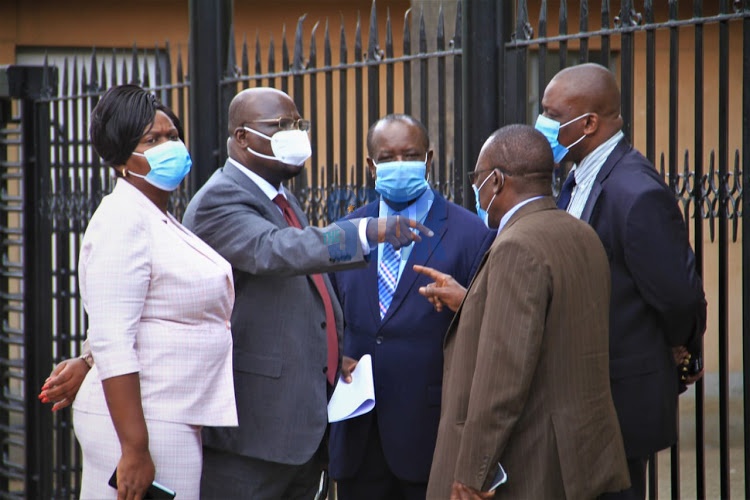 Members of Parliament from sugar growing areas in Nyanza and Western at Parliament Buildings on April.28,.2021.
Image: EZEKIEL AMINGA

The deal which they allege was inked on April 11 will allow Uganda to export to the country up to 90,000 metric tons of sugar from the current 11,000 tons.

The leaders demanded full disclosure of the Bill insisting the agreement will kill the local industry and impoverish farmers.

Koyoo told a press conference at Parliament Buildings that both the Ministry of Agriculture and Agriculture Committee of Parliament were all kept in the dark about the Uganda deal.

“As members of from sugar growing areas, we would like to register our dismay at the casual nature in which the trade ministry has continued to handle an issue that has potential of destroying the livelihoods of eight million Kenyans who depend on the industry,” Koyoo said.

“While the Agriculture Committee investigating the circumstances under which 10 companies belonging to two individuals imported 47,000 metric tons without the prerequisite pre-shipment inspection from the Sugar Directorate, the same Trade ministry which has been mentioned as having overstepped mandate has gone ahead to sign a communiqué’, a clear affront to Parliament and its institutions.”

Okelo said they will not allow a grain of the imported sugar to enter into the country and flood the market linking the importation deal to the coming 2022 elections campaign funding.

“Towards elections, things like sugar importation and hike in fuel prices become common since sugar barons and cartels are trying to raise money for campaigns,” Okelo said.

Odege said Uganda has no advantage over Kenya in terms of sugar production faulting the government for doing little to revive the country’s sugar sector.

“This will open floodgates for other people to import sugar from other countries through Uganda and the net effect is that all our factories will die,” Naicca said.

He claimed of an ongoing illegal importation and repackaging of sugar by known millers to appear as if it is coming from countries within Comesa.