•Kericho Senator Aaron Cheruiyot claimed Linturi had been arrested by DCI officers and linked it to his position on the BBI bill.

•During the session, Linturi had sought the speaker's guidance on the interpretation of Article 257 of the Constitution on whether Parliament can amend the Bill. 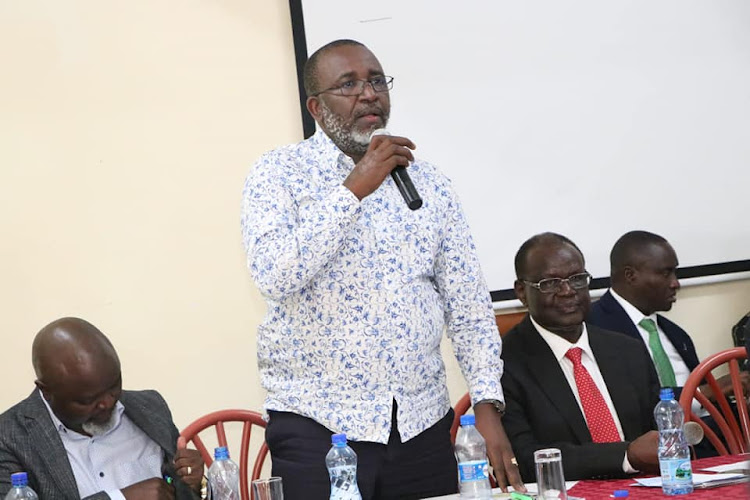 Kericho Senator Aaron Cheruiyot brought to the attention of the speaker the arrest of their colleague whom he said had made a distress call to him that he had been arrested by DCI officers.

“I would wish to know from you whether senator Linturi has been arrested. How do we proceed when we know that?” Cheruiyot posed.

Police sources intimate that Linturi was arrested over claims of bank fraud and would be arraigned on Thursday.

But Cheruiyot linked Linturi’s arrest to his position on the BBI bill that is set for debate in the House.

During the morning session, Linturi had sought the speaker's guidance on the interpretation of Article 257 of the Constitution on whether Parliament can amend the Bill.

However, the speaker had cut him short saying that his request was premature and asked him to raise his point of order during the afternoon session.

Members requested for time to read the report by the joint parliamentary committees.
News
1 year ago

Senator George Khaniri has demanded an explanation from the speaker on whether he was aware of Linturi's arrest.

He said he would boycott the session if members were not told why their colleague has been arrested.

Mutula Kilonzo Jr said all the members should walk out of the chamber until Linturi's whereabouts are known.

Majority Chief Whip Kimani Wamatangi says while it is wrong to arrest a senator 'in the line of duty' it was wrong to impute improper motive on his whereabouts.

He claimed Linturi's arrest was a plot to intimidate members.

Wamatangi later said Linturi had some issues with the police that led to his arrest, but he had since been released and was on his way to Parliament.

“This matter is not as simple as the majority whip is putting it. This issue has everything to do with the liberty of Parliament,” Minority leader James Orengo said.

“I suggest that unless you have a proper answer, this House has no business,” Orengo said, forcing the speaker to adjourn the session for 30 minutes.

“This is very serious and because of the gravity of the matter, I am suspending the session for 30 minutes to find the whereabouts of Senator Linturi,” Lusaka said,

He further ordered the House security Committee to immediately take up the matter to avoid similar occurrences in future.

Post a comment
WATCH: The latest videos from the Star
by JULIUS OTIENO Journalist, Political and Parliamentary Reporter
News
28 April 2021 - 15:16
Read The E-Paper