Post-primary institutions have a shortfall of 57,822, while primary schools have a deficit of 46,109. 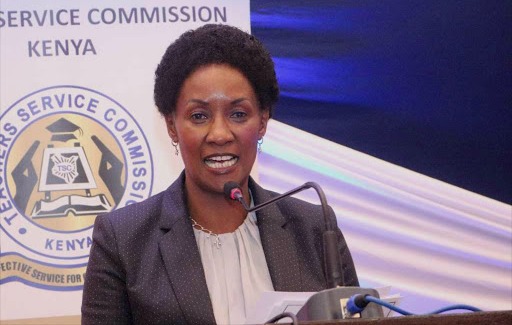 The teacher shortage in public schools stood at 103,931 as of January this year, Teachers Service Commission CEO Nancy Macharia has said.

Macharia, appearing before the Senate Education committee, said the shortage exists in primary and post-primary institutions.

According to TSC documents tabled before the committee, post-primary institutions have a shortfall of 57,822 teachers, while primary schools have a deficit of 46,109.

The TSC boss, however, said the commission is trying to bridge the gap through recruitment of interns and replacement of those who exit the service through natural attrition, among other measures.

Macharia was before the senators to respond to a petition by 16 teachers in Kajiado who complained about being locked out of promotion by the commission.

According to the March petition, the teachers claimed that they have been locked out from leadership by a system introduced by TSC where only teachers who serve in Job Groups L, M and N are promoted to be headteachers, subcounty directors and county directors.

“Through this policy, TSC has been selectively promoting teachers to the said positions and, therefore, discriminating against deserving cases. All resident teachers in Kajiado county are being denied promotion opportunities as a result of the policy,” the petitioners said.

"While resident teachers are continually updating their skills and qualifications to merit leadership promotion, they have been bypassed by the TSC.”

Nominated Senator Judith Pareno accused TSC of open bias and demanded investigations, claiming non-Masaai from one community have taken over schools leadership in the "entire Masaailand".

“All headteachers and their deputies are non-Masaai, most of them are from one community. We will be seeking to show the committee that there is discrimination,” Pareno said.

But Macharia rejected the claims saying the commission is guided by the Code of Regulations for Teachers in effecting promotion.

“To this end, all promotion above common cadre grades and to administrative positions are filled competitively as per the provisions of the Code of Regulation for Teachers and the Constitution of Kenya,” the CEO said.

“Once a vacancy is established, the commission advertises the same through print and electronic media for interested teachers across the country to make applications for the positions.”