Raila said she became a symbol of the resilience and confidence of the African woman.

• Uhuru mourned the Obama family matriarch as an icon of family values and a philanthropist whose contribution to the progress of the Kenyan nation shall be missed dearly.

• Via Social media on Monday, Raila said In between, she became a symbol of the Resilience and Confidence of the African woman. 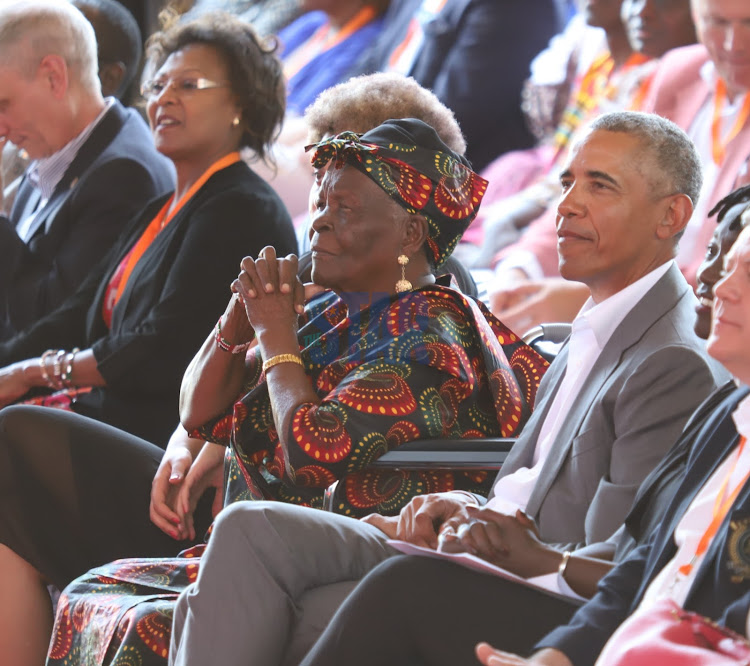 Mama Sarah Obama, the grandmother to former US President Barack Obama died on Monday morning at the Jaramogi Oginga Odinga Hospital in Kisumu.

She passed away aged 99 years.

In his message of comfort, Uhuru mourned the Obama family matriarch as an icon of family values and a philanthropist whose contribution to the progress of the Kenyan nation shall be missed dearly.

"The passing away of Mama Sarah is a big blow to our nation. We've lost a strong, virtuous woman. A matriarch who held together the Obama family and was an icon of family values," Uhuru eulogised.

Mama Sarah Onyango Obama broke barriers, went against the grain and helped foster confidence in women leadership. She was transformational and fearless. We will miss her warmth and signature smiles that inspired many of us.

The President said Mama Sarah Obama will be remembered by many for her philanthropic work especially in her Nyang'oma Kogelo home in Siaya County where she initiated several community development projects.

"She was a loving and celebrated philanthropist who graciously shared the little she had with the less fortunate in her community," Uhuru said.

The President wished the Obama family God's grace as they mourn their departed matriarch.

Raila eulogised Mama Sarah Obama as a matriarch who lived ahead of her time.

"In the passing of Mama Sarah Obama, we have lost a matriarch. She single-handedly kept the family going long after the husband departed," Raila said.

Via Social media on Monday, Raila said in between, she became a symbol of the resilience and confidence of the African woman.

"...with a unique capacity to face the challenges of life. She utilized her grandson President Barack Obama's rise to promote the education of girls and fight social ills through her Foundation," he said.

"President Barack Obama your grandmother's magnetic personality and ability to care deeply for others allowed her to cultivate many lasting relationships," Orengo said.

"She will always be remembered. May the soul of Mama Sarah Obama Rest in Peace."

"Kenyans will miss her dearly. She was always charming and warm to those who visited her in her home in Kogelo," he said.

Nyong'o said she was her late mother's friend adding that she was not only a role model of the larger Obama family but a motherly figure to many people.

"She was a philanthropist who helped to mobilize funds to pay school fees for many orphans and vulnerable children," he said.

Siaya governor Cornel Rasanga said she came across as generous, loving, caring and quite compassionate in her passion for doing good to the less endowed in our society.

"With the demise of Mama, the people of Siaya County will miss her gentle guidance on cultural matters as well as her noble works as an ambassador of peaceful co-existence of our people," he said.

"I send my heartfelt condolences to the Obama family during these difficult moments and pray for God's peace and consolation in dealing with this unfortunate loss."