Some 752,933 candidates will sit the exams from Friday through to April 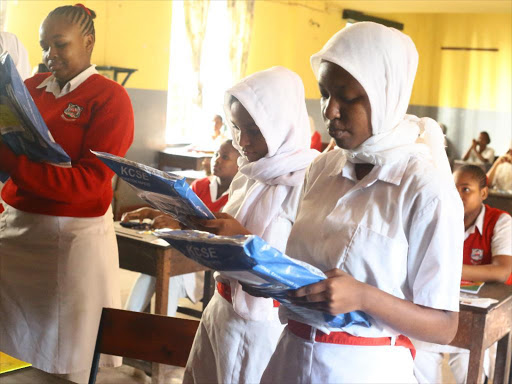 KCSE candidates from Coast Girls confirm if the papers are intact as KCSE kicks off countrywide
Image: FILE

Candidates sitting the 2020 KCSE exam will on Friday begin their tests after schools conducted their rehearsals on Thursday.

Some 752,933 candidates will sit the exam in 10,437 centres and just like the KCPE test that concluded on Wednesday, the KCSE one comes five months late.

It also will be conducted at a peculiar time of the Covid-19 pandemic that saw the candidates spend seven months at home.

Under the circumstances, the Education ministry has instructed schools to adhere to the outlined Covid-19 protocols including handwashing, wearing of face masks and physical distancing.

If all had gone as planned, the KCSE exams would have been conducted between November 4 and 30 last year.

On Friday, the candidates will write English (Functional Skills) and English (Comprehension, Literary Appreciation & Grammar) at 10:30 in the morning.

They will tackle Mathematics paper 1 on Monday next week and later on Chemistry paper 1.

However, with the closure of learning institutions, it is anticipated that some students will not sit the exams, having failed to return to school after reopening.

The number of those in question is yet to be established with the examination council saying such data can only be available after the exam begins.

The Star has also established that the examination council is mulling on counter logistics to various parts of the country in anticipation of the long rains season set to begin in April.

Kenya National Examination Council chief executive Mercy Karogo said on Thursday that all possible hitches had been put into consideration and that no delays will be witnessed.

“Like in the previous year this will be a multi-agency exercise, involving the Education ministry, their Interior and ICT counterparts,” Karogo told the Star on phone.

This year’s test will be the fifth to be administered under stringent rules since the introduction of measures to weed out rampant cheating that had undermined the integrity of the exam.

The measures were introduced by CS Fred Matiang’i, who was then heading the education docket. However, it will be the first since the outbreak of the Covid-19 in March last year.

The Star has also established that early exposure of exam papers and cases of candidates sneaking in mobile phones still remain the biggest threats to malpractice.

In 2019—the last time the KCSE exams were administered—the Education ministry struggled with cases of mobile phones in the hands of candidates.

The devices were perceived to aid in exam cheating.

Education CS George Magoha reported that 90 phones were confiscated during the three-week period over cases of exam malpractice.

A total of 14 teachers were also sacked by the Teachers Service Commission over links to exam malpractice.