Jubilee's NEC set to kick out Ruto next Tuesday

JP official says writings are on the wall and DP could be ejected out of Karen office. 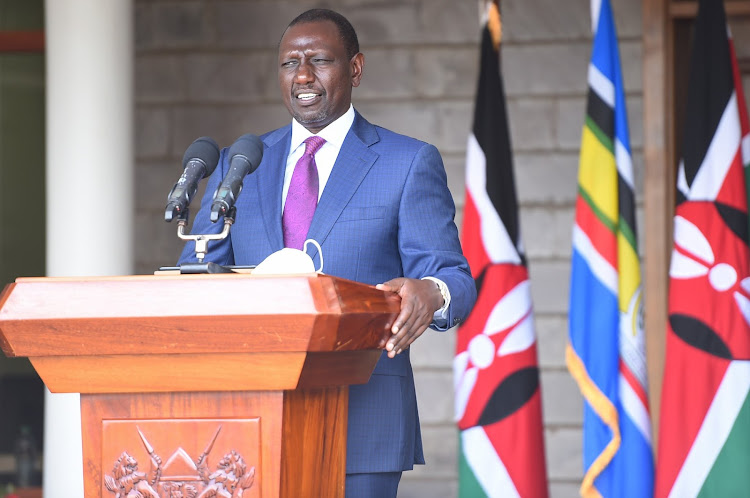 President Uhuru Kenyatta has launched a fresh political scheme to vanquish DP William Ruto ahead of the next general election.

Ruto could be kicked out as Jubilee deputy party leader next Tuesday.

The strategy is to ensure Ruto's UDA candidate is beaten in an elaborate strategy to contain his influence. In a no-holds-barred political duel, the President is employing a multi-pronged strategy to puncture the DP's hustler nation momentum.

The Star has established that the President could next week hold a virtual meeting with the Jubilee National Executive Committee that would seal Ruto's fate and remove him from deputy party leader position.

Jubilee secretary general Raphael Tuju confirmed that indeed Ruto's removal was an issue that must be addressed by a NEC meeting chaired by the President but declined to reveal the schedule.

“According to the party constitution, the party chairman can chair the NEC, but the matter being serious, it can only be deliberated at a meeting chaired by the President,” Tuju told the Star on the phone.

“The matter is still active. The matter being fairly serious, I don't think the party can act without reference to NEC.”

Responding to claims by Ruto's allies that the Jubilee constitution is silent on the procedure of removing the deputy party leader, Tuju said while that could be the case, NEC enjoys sweeping powers.

“The constitution gives the NEC certain powers to certain things and then await the National Delegates Convention of the party to ratify that. We are not so much concerned about the technicalities at the moment,” he said.

“For us as a party, to ensure viability and stability of the country and project Kenya, so to speak, and if the country can be stabilised, the President and the party are ready to pay the ultimate price for that.”

Cherangany MP Joshua Kutuny, who was recently appointed Jubilee deputy secretary general, left no doubt that the President and his men were rallying together to cut Ruto down to size, starting with Machakos.

“The President reached out to the other leaders of political parties because he is the big brother for the sake of unity. We saw what happened in the recent by-elections and the President does not want to see a repeat of that,” Kutuny told the Star on the phone.

He revealed that plans are afoot for Jubilee to have a joint retreat with "other like-minded" political parties to deliberate on the approach to the BBI referendum and the 2022 general election.

“He (Ruto) has already boxed himself into a corner and he should carry his own cross. As a party, we just want to get rid of roadblocks that stand in the way of development and unity,” Kutuny said.

Ruto's allies have come out strongly claiming that the National Management Committee has no mandate to execute such a radical resolution as sacking the DP without the input of the National Delegates Convention.

Ruto's removal would follow a streak of purges targeting his allies in the Jubilee party, a move that boxed him out from the nerve centre of government and significantly weakened his grip on the ruling party.

However, another Jubilee official told the Star that the party was keen to dispense with Ruto's issue soonest.

“Given the strict Covid-19 protocols, the NEC meeting will be online anytime within next week,” said the official, who sought anonymity. 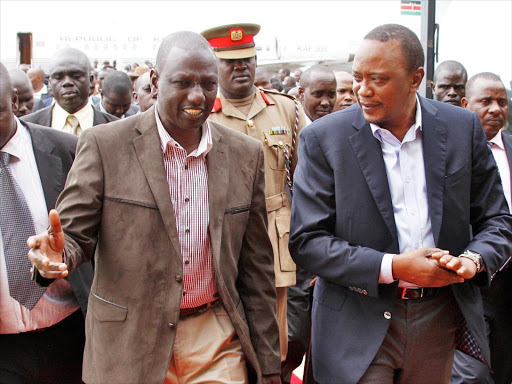 Albert Mbaka, the Jubilee National Advisory Council chairperson, said the DP must be dealt with firmly because he has crossed the red line.

"He has shown disrespect and contempt. The party cannot withstand that, he must be dealt with," he said.

Saying the party leader has the discretion of adopting the NMC recommendations or calling NEC, Mbaka said the writings are on the wall and the DP could be ejected out of the Karen office.

"Karen does not belong to Ruto, it is deputy president's office. If he is not following the Jubilee tenets, he must move out of that house," he said.

As part of the wider scheme to deflate Ruto's nationwide presence, the President has reached out to at least seven leaders of key political parties, leaving the DP isolated and his 2022 presidential bid wounded.

During the meeting, Uhuru reportedly dissuaded the Nasa chiefs from squabbling.

With the President pleading with the six leaders to remain united, Ruto remains the common enemy.

The Tuesday meeting was the first to be attended by such a large number of party leaders. It came at a time when the President is determined to steady the Building Bridges Initiative ship following persistent squabbles.

The last-minute withdrawal of its candidate Mutua Katuku was meant to cushion Wiper's Agnes Kavindu from a tough challenge from Urbanus Ngele of UDA—although that was not publicly referenced as the reason. 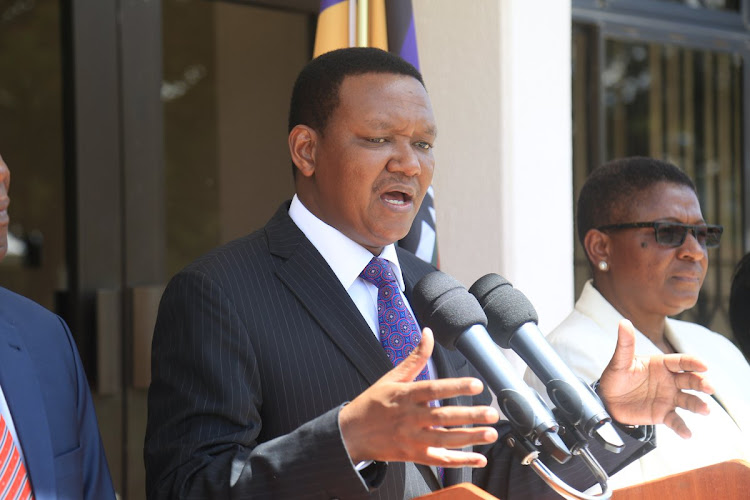 Ruto's allies from Ukambani, led by UDA chairman and former Machakos Senator Johnson Muthama, are determined to use the by-election to affirm  that Tangatanga has made inroads in Ukambani.

Elgeyo Marakwet Senator Kipchumba Murkomen read mischief in the last-minute withdrawal of the MCC candidate, saying the party was coerced to surrender through state intimidation.

“What can you term what has happened in Machakos? It is not just an act of panic by our competitors but also a clear indication that Raila Niwachie coalition members have used state machinery to arm-twist, coerce and cajole Maendeleo Chap Chap party leader to withdraw his candidate from the race,” Murkomen said.

In the multi-faceted assault on Ruto's hustler nation, President Uhuru is said to have deployed the Jubilee machinery to ensure the party bags the Juja parliamentary seat during the May 18 by-election.

The President is pulling out all the stops to assert his grip on his Mt Kenya backyard by averting any humiliating loss in his home county of Kiambu. 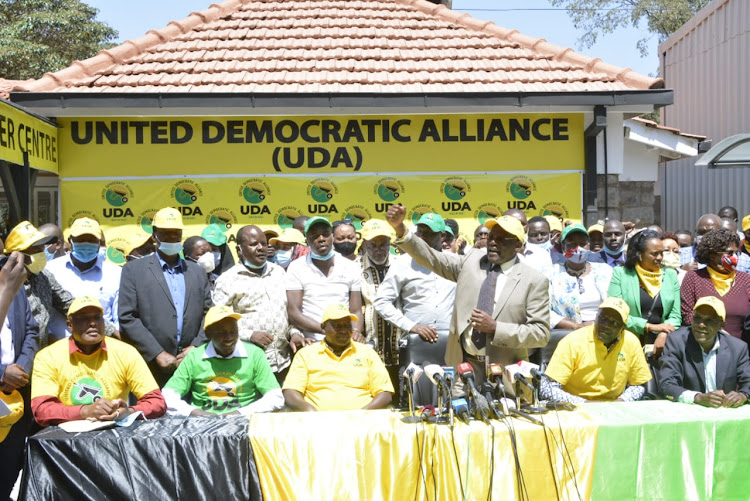 UDA members at the party's offices in Kilimani, Nairobi, on January 8, 2020.
Image: UDA/TWITTER

Ruto's UDA party pulled out of the Juja by-election allegedly after realising that the President had ordered the Jubilee machinery to deliver the seat.

Mwala MP Vincent Musyoka said the DP has proved that he is a threat to the political establishment, pointing out that if indeed the President and his team were not scared, they would not have forced the MCC candidate to withdraw from the Machakos by-election.

The lawmaker said Uhuru's move to rally the leaders behind Wiper smacks of authoritarianism.

“They are killing our democracy as we watch and it must be resisted. You cannot whip people to support a certain candidate in the name of unity. The country should endeavour  to let people choose the people they want to elect, not being forced,” he said.

UDA said it has consulted and deemed it fit to wait until 2022 to field candidate.
News
10 months ago
by JAMES MBAKA and GIDEON KETER Thestarkenya
News
18 March 2021 - 07:00