Say BBI proposals will be burdensome and will drive the country into a constitutional crisis.

• The DP is today expected to tour Trans Nzoia county to drum up support for his hustler movement.

• Ruto on Friday announced that he will not lead the no campaigns against the BBI. 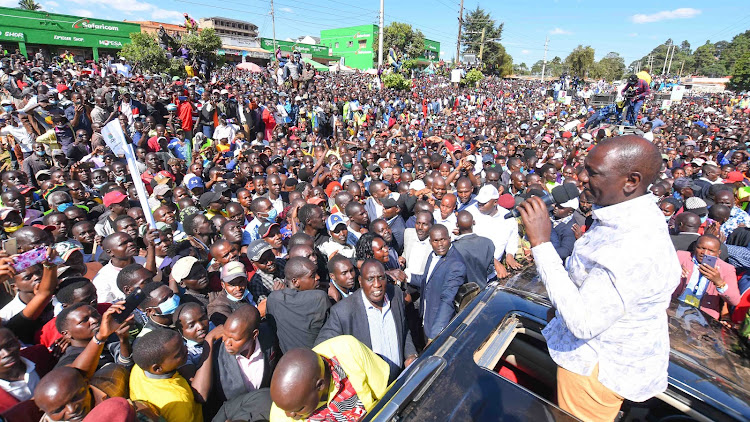 Deputy President William Ruto's allies on Saturday issued a warning that a true constitutional moment will come should the proposed constitutional amendments be adopted in a referendum.

“Politics aside, as much as there are sweeteners that have been put in the BBI Bill to get several sections of society supporting it, what the President has been calling a constitutional moment will indeed come,” Belgut MP Nelson Koech said.

Koech said some of the proposals such as expanded Parliament, Executive and presidential powers will be burdensome and will drive the country into a Constitutional crisis.

“It will not be easy to implement some of these proposals. In a country where we are already in a debt crisis, how will the country be able to service loans at the same time afford such a huge wage bill? I urge Kenyans to look beyond partisan politics and make informed choices,” he said.

The DP is today expected to transverse  Trans Nzoia county to drum up support for his hustler movement.

He will make his first stop in Endebes constituency where he will inspect development projects. He will later attend a fundraiser at Full Gospel Church and youth and women empowerment activities at Moi's Bridge.

He is also expected to grace a church harambee in Gatanga constituency, Murang'a county on Sunday.

Ruto, while touring Nandi county on Friday, announced that he will not lead the no campaigns against the BBI.

Kimilili MP Didmus Barasa said the reason they have been arguing that BBI  is not a priority is that the changes, if effected, will be too costly.

He said some of the proposals contained in the Bill are outrageous and Kenyans will feel the pain should they pass it.

“The current Constitution is too expensive because of the several offices it created. Now BBI is even expanding the Executive and Parliament and all these shall be run with the taxes from Kenyans. When we caution that it is not a priority, it is because of such things that will overburden the taxpayer,” he told the Star.

Mathira MP Rigathi Gachagua, whose Nyeri county assembly was among those who passed the Bill on Tuesday, accused the Jubilee administration of resorting to bribery and intimidation for the Bill to pass.

He claimed apart from MCAs being given a car grant, the state dished out Sh100,000 to the county representatives, especially in counties that were resisting it.

“What has happened is shameful to our democracy. What we saw is vote procured on bribery and intimidation. I don't know how they will bribe Kenyans,” he told the Star on the phone.

He however said "should the government force it down on Kenyans, so be it.

“We have said we do not a contest because some people have political agenda they want to achieve ahead of 2022 but I want to ask Kenyans not to fall into the sweeteners in BBI,” he said.

“The consequences are dire. At the beginning of 2013, Kenyans were complaining that we have a bloated government, now this one will even burden us more,” Gachagua said.

Jubilee deputy secretary-general Caleb Kositany, however, said that should Kenyans pass the bill, the DP will work with the final outcome of the planned BBI  referendum.

The Soy MP said that Ruto will respect the democratic will of Kenyans.

“If Kenyans will find the proposals contained in the Bill good for the country and pass them in a free and fair referendum, the DP will be fine with that,” he said.

The MP who is a close ally of the DP said MCAs were pushed and coerced by the State to pass the Bill saying Kenyans will have the last say.

“Clearly something is fishy in the manner in which the assemblies are passing the Bill. The presence of governors in the assembly chambers tells you the kind of coercion that are applying on MCAs,” Kositany said.

“The State may have had its say but the next stage is for Kenyans to have their way too. If they will speak in favour of the Bill, all of us will abide by the position.”

Kositany said there are some senior government officials who were tasked with bribing MCAs to endorse the Bill.

“There are reports that a senior government official was giving each of the MCAs in his region Sh50,000 to pass the Bill,” he said.

Kositany said the DP has not directed any county assembly to vote for or against the Bill, pointing out that Kenyans are free to make their own informed choices.

“He has friends across the 47  counties and it is ridiculous for some people to think that DP will give them the direction to take. Others may have done for their own interest but not the DP,” he said.