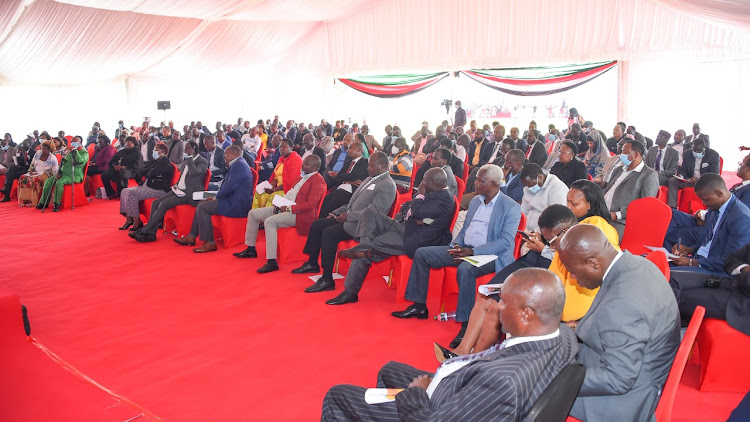 WITHHOLD DUES: MPs allied to DP William Ruto during a meeting at his Karen residence on Monday, February 8.
Image: DPPS

Deputy President William Ruto’s allies have made good their threat to starve the Jubilee Party of cash in monthly subscriptions deducted from their salaries.

National Assembly clerk Michael Sialai told the Star on Wednesday he had received requests from more than 100 members to stop their monthly party deductions sent to Jubilee.

The members, Sialai said, have given him the authority to instead remit those monies to their banks or other accounts.

Most of the members want their money sent to a welfare group Kazi ni Kazi – affiliated to the United Democratic Alliance linked to DP Ruto.

They want the deductions switched this month and are contemplating mass resignations to allow them build the new outfit.

The clerk said it is a member's responsibility to direct his office how to apply his or her party dues.

“Once such application is made and duly signed, the clerk acts as directed,” Sialai said following queries by the Star.

Ruto’s allies endorsed the resolve on Monday during a meeting attended by more than 130 MPs subscribing to the Tangatanga wing of Jubilee.

The development deepens the battles within the President Uhuru Kenyatta-led party.

At the meeting, the lawmakers accused the state of intimidation and endangering their lives. They pledged to starve the ruling party of cash.

A number of lawmakers told the Star in separate interviews they had directed that the lion’s share of their dues be diverted to other activities.

Whereas Koech said only Sh500 would go to the party, Sudi left only Sh50.

Mathira MP Rigathi Gachagua said the decision on remittances rested with individuals and he has instructed the clerk to stop his Jubilee deduction.

“I have reduced my contribution to Jubilee because the party does nothing. There is no need to put my money there,” the lawmaker said.

“The people who use that money drink it and come to abuse us. The party is not active, the organs don’t meet. The only organ of the party that is working is the disciplinary committee,” he added.

The MPs said the prevailing circumstances amount to misuse of his money "to give allowances to committees whose work is to expel members from the party".

They can stay with their party. They bullied us out and thus cannot have our money and make decisions which we are not part of.

Gatundu South MP Moses Kuria said he was never a contributor in the first place.

Nominated MP David Sankok said he is not part of the group that wants their money out of Jubilee.

“I do my monthly subscription and I have never had any complaint. I did not hear of something of the sort.”

Soy MP Caleb Kositany said, “They can stay with their party. They bullied us out and thus cannot be having our money and making decisions which we are not part of.”

The lawmaker said that in their view, Jubilee is dead as a political party. “Anybody remaining in Jubilee is the minority.”

Jubilee secretary general Raphael Tuju said the party would follow the law in dealing with the errant members.

He  said they would wait for official communication from the clerk,  majority leader or whip.

“If that would be the case, we will take the matter up with the Registrar of Political Parties," he said.

Tuju dismissed the impact of the deductions’ threat, saying it was “no big deal.

“These are people flexing their muscles. We are waiting to get the official communication and then we will deal with it following the law,” the Jubilee SG said.

Ndaragwa MP Jeremiah Kioni said such withdrawal instructions are proof of the lot having shifted from the party that sponsored them to Parliament.

“This is a very strong ground for those who may want to expel them from the party through the party machinery to do so,” Kioni said.

The MP cited the case of Senator Charles Kibiru whom he said is in the Senate courtesy of a stay of execution after a court found he had rerouted his undertakings with his voters.

“If they want to pay their subscription to another party, that is all the proof needed to show that they have shifted their loyalty and betrayed what they promised to the electorate and are inviting their seats to be vacated,” Kioni said.

He dismissed the group as being naïve and possibly being encouraged by people seeking to make a statement.

“No MP would want to be faced with expulsion when the ground is being readied for an election in less than two years," he said.

But Kositany dismissed the assertions, saying UDA or PDR are affiliates of the Jubilee Party.

“There is no question of resigning and even if we were to go, we are over 150 MPs and that would precipitate a general election,” the Ruto ally said.

Why Ruto will not quit Uhuru's Jubilee yet