NOT A WALK IN THE PARK

Lawmakers say the threshold to impeach the DP is too high as set in the Constitution.

• The Tangatanga MPs dared Lugari MP Ayub Savula to table the alleged motion to remove Ruto from office, saying they have the numbers to thwart it.

• The MPs also alleged that a special police hit squad has been assembled to assassinate members of Tangatanga.

Deputy President William Ruto's allies have laughed off threats to impeach him even as they alleged the state was unfairly targeting them.

The Tangatanga MPs dared Lugari MP Ayub Savula to table the alleged motion to remove Ruto from office, saying they have the numbers to thwart it.

Speaking after a five-hour meeting at the DP's official Karen residence, the 139 lawmakers said the threshold to impeach Ruto is too high as set in the Constitution.

“Let them not discuss the impeachment of the Deputy President in bars, in funerals, and in their apartments. Let them bring it to the floor of the House starting tomorrow [Tuesday] when the House resumes,” former National Assembly Majority leader Aden Duale said.

The Garissa Township MP said impeaching the DP is not a walk in the park.

“We are telling all of them. The ODM, ANC, Wiper, the Kieleweke...please, go and sit somewhere and bring the impeachment. We are ready for you," he said.

Savula of ANC has said he will table a motion to impeach Ruto this week once Parliament resumes from a long recess, but his critics have denounced the move.

Big parties, including Jubilee and ODM, have denounced Savula, saying they are not party to the bid.

The DP's allies said that while Kenyans are not ready for a referendum at this time, should they be forced into one, then they need real choices at the ballot.

"As leaders who are in touch with the people on a continuous basis and with their needs and aspirations, we reiterate our earlier position that constitutional changes are not a priority for the nation," they said in a statement.

Kenyans should be allowed to make choices without "intimidation, blackmail, use of force and bribery", they said.

"Should the country be forced into a referendum, citizens should be provided with information on what is being changed, for what purpose and for whose benefit," they said.

The MPs also alleged that a special police hit squad has been assembled to assassinate members of Tangatanga.

They asserted, without providing evidence, police officers are being withdrawn from events attended by Ruto and the hit squad deployed to instigate targeted political violence.

The withdrawal of police from the DP's meetings, the MPs said, is meant to facilitate the kidnapping of Tangatanga MPs with the aim of assassinating them.

They took turns reading a joint statement at Ruto's Karen office. The DP looked on, seated in a chair.  The MPs alleged the assassins were dispatched last weekend to meetings attended by Ruto in Mombasa, Kwale and Kilifi.

They said as a civic duty, they had relayed the information to authorities, with details including the name of the squad, the commander and the  identities of the officers.

“We demand this illegal hit squad be disbanded immediately,” the Tangatanga MPs said in a joint statement. 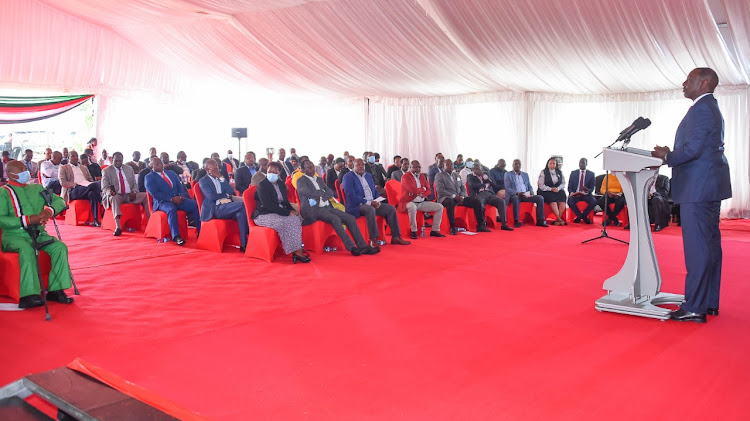 According to the lawmakers, the hit squad was responsible for the mayhem that marred the Msambweni parliamentary by-election and the skirmishes in Kenol, Murang'a county, last year in which two people were killed.

“We are aware that a special and officially-sanctioned hit squad has been formed to perpetrate political violence,” they said.

“We understand that the squad's mission is to instigate targeted political violence, kidnap political leaders and execute political assassinations.”

The MPs warned of the return of assassinations ahead of the 2022 polls.

“We shudder at the thought of Kenya going back to the ominous dark era of political assassinations that characterised the late 1960s, 1970s and 1980s.”

They urged Inspector General of Police Hillary Mutyambai to take charge and ensure all police officers deployed to all events graced by Ruto wear official uniforms with service numbers displayed prominently on their badges.

The lawmakers asked the international community to keep a keen eye on Kenya, adding that the political temperature was rising.

“We urge the international community, including the African Union and the United Nations, to turn its focus on Kenya and help this country avoid a precipitous descent into a political meltdown as next year's elections near,” they said.

At the same time, the DP's allies warned that the state was deliberately pushing the country towards the collapse of the rule of law and paralysis of oversight of institutions.

“Worrisome, we are witnessing the return of detention without trial through the misuse of the police and the criminal justice system where individuals are held without the benefit of a judicial hearing,” they said.

Say Ruto is willing to visit.
Counties
1 year ago

DP Ruto schemes to win back critics in Rift Valley