It is perhaps due to his vast business experience that the Moi regime selected him to take charge at the National Treasury in 1990s. 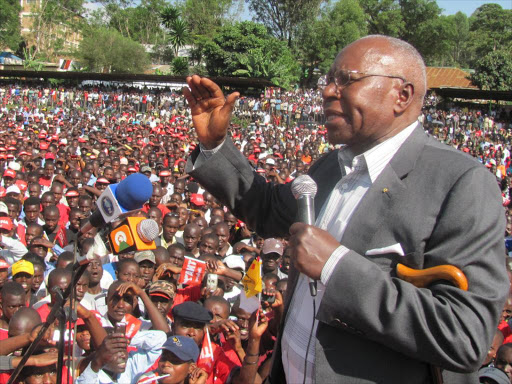 When NCBA bank released the investor booklet at the 2019 annual general meeting, most focus was on President Uhuru Kenyatta's family shareholding.

The First Family's shareholding at Kenya's third largest bank in terms of asset value had risen to more than 13.5 per cent or Sh6.8 billion upon conversion of CBA Bank shares.

Also glorying, albeit slowed down by pain from a terminal illness that claimed his life early Monday, was a powerful minister in the Moi regime—Simeon Nyachae. His shares following the merger of NIC and CBA had almost tripled to 8.6 million from the 3.1 million he held in CBA Bank.

Apart from NCBA, the late minister's family is said to have a huge stake in Credit Bank, a tier III lender that has been in operation since 1986.

According to Business Daily, Nyachae served as chairman of the bank while his wife Grace Wamuyu is a director.

Behind the political razzmatazz, Nyachae was a shrewd businessman who built his multibillion-shilling empire from a simple bakery at Nyanturago market in the mid-1950s.

Reports have it that the bakery business was the foundation of the Sansora Group, which has interests in wheat and flour milling via Swan and Kabansora Millers, agriculture, banking and real estate.

Although vocal in politics, Nyachae took a back seat in business, opting to push his cards in secret. It is no wonder that little is known about his total net worth, with unconfirmed reports estimating it to just over Sh110 billion.

It is also rumoured that the powerful Kisii kingpin owns a ranch in Australia and several tea farms in South Africa and Zimbabwe.

It is perhaps due to his vast business experience that the Moi regime selected him to take charge at the National Treasury where he served as the Minister for Finance in the 1990s.

He also had a short stint at Kilimo House as Minister of Agriculture before being moved to the Ministry of Trade in 1999.

This iron fist man was the son of colonial chief Musa Nyandusi.
News
1 year ago