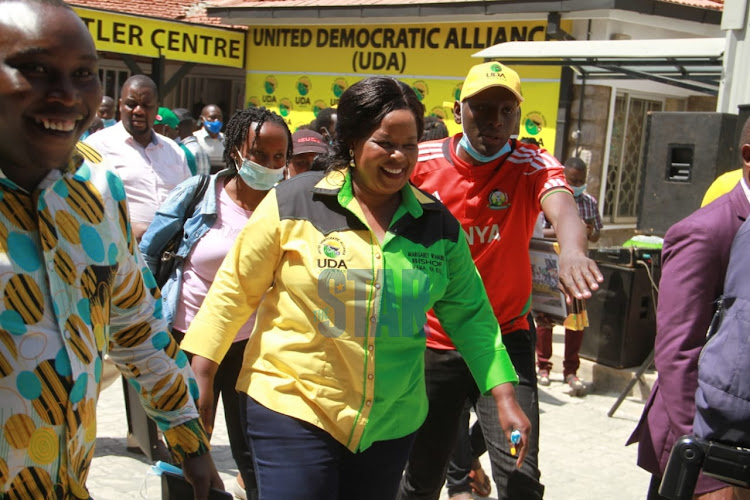 Former Starehe MP Margaret Wanjru after she was unveiled as the UDA flag bearer for the Nairobi gubernatorial by-election.
Image: EZEKIEL AMINGA

Deputy President William may as well have dumped Jubilee after a host of his close allies embraced the United Democratic Alliance and launched the Hustler Centre office.

The UDA outfit has been formerly registered by the registrar of political parties after a successful name change from PDR.

Friday's launch of the UDA headquarters and the unveiling of party candidates for the upcoming by-elections left no doubt the DP has technically quit Jubilee.

Ruto's Tangatanga allies wore UDA caps as they announced they had finally landed home after what they termed as humiliation at Jubilee headquarters.

Falling short of calling it quits from Jubilee the DP's troops dared the ruling party for a duel in the forthcoming by-elections.

They said, UDA being a Jubilee affiliate, they risk no sanction as they had merely restated their cooperation with the rebranded outfit.

“We all know that in the Jubilee coalition there are so many rooms, there is a Jubilee party room and a UDA one. The Jubilee room has been locked but we want to find a place to sleep in the UDA room because the door is open,” Murkomen said at the new UDA offices.

The offices are located along Makindi Road, off Riara Road, and has been refurbished and repainted the wheelbarrow party seen as the DP's 2022 political vehicle.

Murkomen said that the Tangatanga team was only cooperating with a political party that already has a working agreement with the mother Jubilee party and therefore would not be intimidated.

“These members here, we are working with a party that signed a pre-election coalition agreement before the last election as PDR but has now been renamed UDA,' Murkomen.

The Hustler Centre appears to be a reincarnation of the Jubilee Asili Centre which was opened by the DP's allies mid last year after Ruto's allies were axed from plum party posts.

The DP's Tangatanga team came under heavy criticism for operating a parallel office to the Jubilee one with President Uhuru Kenyatta's allies challenging Ruto to quit over the move.

The office was later closed down with Ruto's allies insisting that the landlord had been intimidated by the state machinery to evict them from the building.

However, Friday's move by the DP's allies to openly embrace the UDA party whose slogan is the Wheelbarrow-Ruto's Hustler National campaign slogan-left no doubt of a decision to quit Jubilee.

“We have been in a party in which we have been warned not to even set foot at the headquarters, UDA being an affiliate Jubilee party we are ready to come here and work with it,” said Kikuyu MP Kimani Ichung'wa.

The Ruto ally tore into Jubilee officials including Secretary general Raphael Tuju who last year, in a public statement, declared that Ruto was not welcome to do his 2022 politics .

“Those who chased us and declared us personal non grata at the the Jubilee headquarters, we now have a Jubilee affiliate party that has hospitable headquarters,” he said in a scathing attack.

Lifting the lid on the real motive, Ichungwa said the Wheelbarrow is what makes all Kenyans equal, referring to the UDA symbol which is also Ruto's signature slogan.

“Under the wheelbarrow and the hustler nation movement, we shall rescue the economy of this country from sinking at a time when the leadership is focusing on sharing positions,” Ichung'wa declared.

Mumias East MP Benjamin Washiali insisted that the hustler nation will work closely with UDA because it is the “place to be.”

"UDA is just one of the rooms of Jubilee and we are not ashamed to join it, we shall continue to support UDA," said Washiali.

The UDA party unveiled bishop Margret Wanjiru as its flagbearer for the February 18 Nairobi by-election.

This opened a new battlefront with President Uhuru who us expected to back another candidate in a partnership with the ODM boss Raila Odinga.

Matungu poll will be held on March 4.

Evans Kaikai Masinde has been handed the certificate of the party as the Kabuchai constituency aspirant for the by-election that will be held the same day.