President Kenyatta has extended curfew by another 30 days.

• 90 patients have recovered from the disease, bringing  the total number of recoveries in the country so far to 7,833.

• Meanwhile, President Uhuru Kenyatta after chairing a meeting with governors on the Covid-19 status in the country on Monday said, the relatively low fatality rate in the country could be giving Kenyans false comfort. 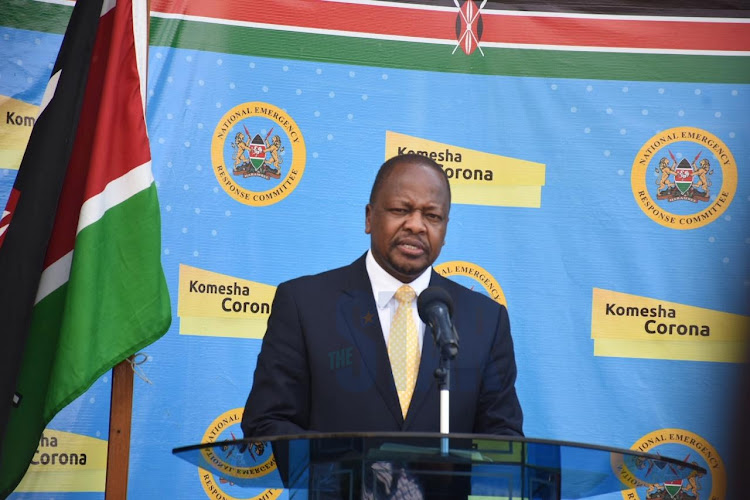 The new positives were drawn from the 3,197 people whose samples were tested within 24 hours, out of which all except three were Kenyans.

Health CS Mutahi Kagwe in a statement said in terms of gender, 286 were males and 154 were females. Age wise, the youngest was a one year old infant , while the oldest was 84 years.

On a positive note, 90 patients have recovered from the disease, bringing  the total number of recoveries in the country so far to 7,833.

However, five more patients succumbed to the virus, raising fatalities in the country to 285.

Forty-five out of the 47 counties have now reported Covid-19 cases after Baringo recorded its first case. Only West Pokot and Samburu have not confirmed any cases.

Meanwhile, President Uhuru Kenyatta after chairing a meeting with governors on the Covid-19 status in the country on Monday said, the relatively low fatality rate in the country could be giving Kenyans false comfort.

He reiterated that  the government will not police the morality of its citizens.

"We cannot have a policeman in every street, village and home to enforce the laws. We need citizens to hold each other accountable," he said.

The fifth extraordinary session of the National and County governments Co-ordinating Summit programme kicked-off at around 11am with a Statutory Citation by the Devolution CS Eugene Wamalwa.

Among consequnces of the meeting include ban on selling alcohol in restaurants and eateries for the next 30 days, effective midnight on Monday.

Uhuru said all bars will remain closed indefinitely, adding that those that don't adhere will have their licences permanently withdrawn.

Kenyans had eagerly waited for the outcome of the extraordinary summit on how to contain the coronavirus spread.

Uhuru said closing the country will not help Kenya fight the coronavirus pandemic at this point.

"Kufunga nchi haitasiadia (closing the country won't help) the government cannot be on the door of every Kenyan, the responsibility is ours," he said.

The meeting followed concerns of a surge in Covid-19 infections.

Uhuru to address the nation today at 3pm after meeting governors

The President will discuss the adoption of the extraordinary summit resolutions.
News
8 months ago

County chiefs will also be pushing for establishment of testing centres in every county
News
8 months ago
by SHARON MAOMBO
News
27 July 2020 - 17:13