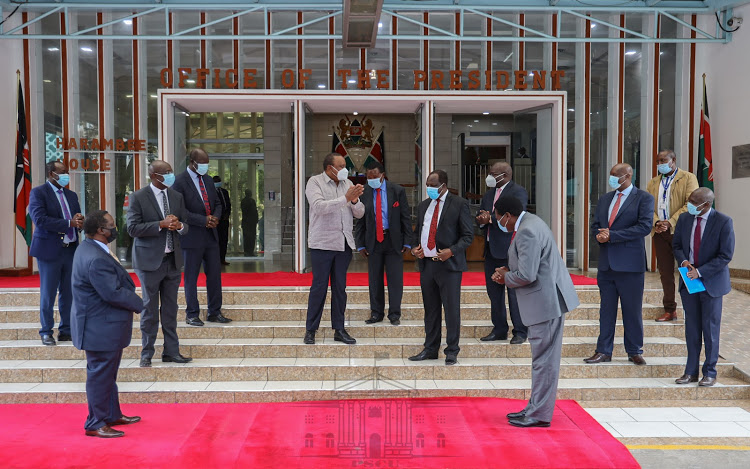 President Uhuru Kenyatta at Harambee House after a past meeting with Western Kenya leaders.
Image: PSCU

President Uhuru Kenyatta has convened a Covid-19 crisis meeting with governors on Friday as the virus wreaks havoc with a sharp surge in new infections.

The virus has nearly crippled the civil service, with Parliament being put on lockdown after reports indicated that over 50 staff had tested positive.

At the Industrial Area Prison, 84 inmates are said to have been infected as the death toll from the virus hit 238 on Monday.

A total of 13,771 persons have tested positive for Covid-19 in Kenya, with an average of 400 people being infected daily over the last one week, according to government statistics.

Uhuru has called the 47 governors to review the state of affairs after he eased restrictions on July 6 as the state moved to tighten Covid-19 guidelines.

The surge in the number of Covid-19 deaths and infections will top the President's agenda with the county bosses.

“The session has been convened following a surge of Covid-19 infections across our nation, with the disease having now manifested in 44 of our 47 counties,” State House spokesperson Kanze Dena announced.

On Monday, Head of Civil Service Joseph Kinyua warned that civil servants had not complied with Covid-19 guidelines.

"In spite of the tests revealing a number of Covid-19 positive cases, there has been lack of strict observance of the issued guidelines and measures meant to enhance the efficacy of the management of the disease and protect all Kenyans from its effects," Kinyua said in a circular dated July 20.

Kinyua said all public servants with pre-existing medical conditions or aged above 58 should work from home.

This applies to officers working in job groups "S" and below.

"Where the concept of working from home has been successfully implemented, such arrangements should continue to apply with clear targets and deliverables for the officers,"Kinyua directed.

He said all government meetings involving more than four staff should be done virtually.

In a bid to enhance safety, Kinyua said all staff who have been in quarantine or isolation must be declared coronavirus free before being allowed back to work.

Such officers will be required to stay home for seven days after medical certification and present the medical report to their supervisors upon returning to work.

"The period a  public officer spends in quarantine or isolation due to Covid-19, shall be treated as sick leave and shall be subject to to the provisions of the Human Resources Policies and Procedures Manual for the Public Service," Kinyua said.

Principal Secretaries will be personally responsible for effective enforcement of the new directives, Kinyua ordered.

The new directives come just days after Parliament was put under lockdown and staff ordered to work from home following surging number of confirmed cases.

The move, according to a memo by the clerk, was to allow for fumigation and decontamination of the facility.

Parliament sources who spoke to Star put the number of Covid-19 cases to over 50.

However, the Star could not independently authenticate this.

The positive cases are said to be mostly parliamentary staff and the outsourced cleaners.

Most cases – according to our sources – were confirmed at Protection House where the accounts, human resource and Sacco departments are housed.

A number of cleaners who were stationed at Protection House were told to self-isolate after a number of them tested positive.

“As we speak even most of the staff working in accounts, HR and Sacco are in self-isolation. That was the epicenter,” said a source who did not want to be named given the sensitivity of the matter.

National Assembly Clerk Michael Sialai did not pick our calls or respond to our messages by press time.

Last week, Speaker Justin Muturi in a communication to the House opened up and admitted the number was indeed surging at an alarming rate.

“It is a matter of public knowledge that there has been a spike in the number of infected cases in the country in the last two weeks and Parliament has not been spared,” Muturi said in his Wednesday’s communication.

He further suspended any physical committee meetings, directing that all meetings must be virtual.

“Henceforth, all committee sittings will be held virtually unless otherwise stated with my express authorization.”

From Friday last week, Parliament Buildings, including Continental House and Protection House, were declared out of bounds and all staff directed to work from home for the next 12 days.

Only few crucial staff at the clerk’s office and sergeant-at-arms are allowed at the facility, with the rest of the workforce, including MPs assistants, working from home.

“Officers are advised to work from home as from July 17, 2020 until July 28, 2020 except for those in the Office of the Clerk and designated officers from the Serjeant-At-Arms department,” read part of Sialai’s memo.

“All other offices will remain closed, including Honourable Members’ offices within Parliament. You are therefore required to advise all officers working under you accordingly.”

At the Clerk’s office, only one secretary reported to work on Monday with the remaining offices including Speaker’s closed.

From the sergeant-at arms office, only a number of security officers are deployed to man the establishment and also help the fumigators who are contaminating the place.

MPs were allowed in but without their bodyguards, drivers or personal assistants.

Things were, however, slightly relaxed at the Senate, where a number of offices were partially open for business.

However, only designated staff whose names are listed with security were allowed access to the offices. No visitor was allowed in.

At Nairobi’s Industrial Area Prison since authorities have intensified testing of more than 2,400 inmates at the facility since last week.

“The situation is not good at all. We are actually sitting on a time bomb. We have more than 26 inmates sharing a room of about 10 by eight feet. Its worrying,” said a source at the facility.

Sirisia MP John Waluke and former Cabinet minister and Kanu official John Cheruiyot are among high profile inmates being held at the facility.

More worrying is the fact that the inmates who have been tested cannot get treatment outside since most of the facilities, including the Kenyatta University Hospital, are said to be full.

“We have inmates being brought in and remandees being added on a daily basis yet the prison has not expanded,” an officer said.

“We all feel exposed to this deadly virus."

Various prisons have no isolation facilities thus exposing inmates and wardens to the virus.

Commissioner General of Prisons Wycliffe Ogallo told the Star he was in a meeting and promised to respond later.

Ministries on lockdown as Covid-19 tears through civil service