Medical council backs Lancet, turns up heat on other labs

• All test kits used at Lancet are approved by the US Food and Drugs Administration and the European Union.

• The political pressure to flaunt 'Covid-19 negative' certificates and avoid isolation, may have forced some sick Kenyans to procure fraudulent results elsewhere. 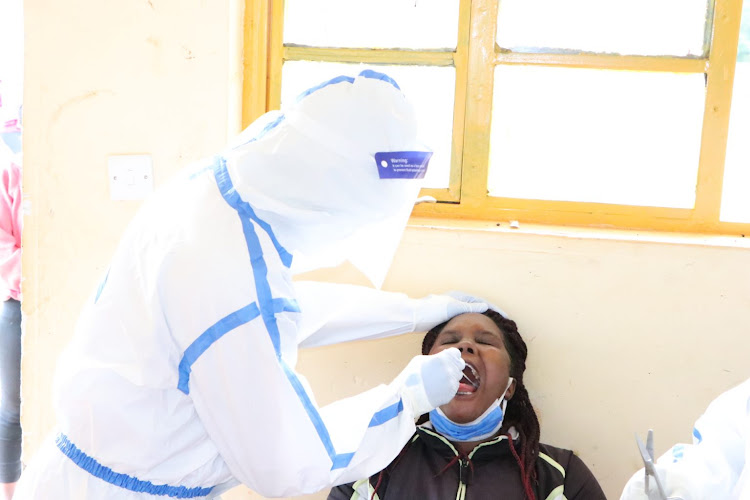 SWABBING: A sample is collected for a Covid-19 test from a Nandi resident on July 2, 2020.
Image: MATHEWS NDANYI

Investigations by the Ministry of Health have cast doubts on the validity of the 'negative' results obtained by some Kenyans who had tested positive for Covid-19 at Lancet laboratories.

The ministry's technical team is now probing if some unethical laboratories have been issuing false negative test results.

KMDC has now written to Health Cabinet Secretary Mutahi Kagwe recommending an audit of other Covid-19 testing labs across the country.

"KMPDC and KMLTTB should undertake a similar process in the laboratories that are carrying out SARS-CoV-2 testing in both public and private laboratories," medical council chair Dr Eva Njenga says in the letter.

Dr Njenga said the tests should take into consideration the nature of molecular tests in other laboratories and whether they tested the same sample taken to Lancet.

Some health officials told the Star the stigma, the political pressure to flaunt 'Covid-19 negative' certificates and avoid isolation, may have forced some sick Kenyans to procure fraudulent results elsewhere.

Some of the 'negative' results were procured from laboratories based in Nairobi's Eastleigh estate.

The medical board says all test kits used at Lancet are approved by the US Food and Drugs Administration and the European Union.

"The tests carried out for SARS-CoV-2 is PCR which is as recommended  by the Ministry of Health, the US Centres for Disease Control and the World Health Organisation," says Dr Njenga.

Lancet, the biggest chain of private pathologists in East Africa, is majority owned by Cerba HealthCare, a French multinational, and Lancet SA of South Africa.

The council said the testing kits and reagents used at Lancet in Nairobi are superior to those in local laboratories.

The stigma and political pressure to flaunt 'Covid-19 negative' certificates and avoid isolation, may have forced some sick Kenyans to procure fraudulent results elsewhere.

"Lancet tests for three SARVs-CoV-2 genes whereas other laboratories in the country could be testing for two genes thereby creating possible discordant results from other results," the council says in its verdict.

He noted it is possible other laboratories might apply less sensitive procedures, and generate false negatives.

"If a sample was to be tested on the Seegene Allplex assay that we use at Pathologists Lancet Kenya and the same sample was also tested using the other assays that detect two viral genes and have been shown to miss detecting positive cases with low viral loads, it means the true positive cases may be misconstrued as false negative should one go with the negative result," he said.

"Lancet have state-of-the-art machinery, conform to national and international laboratory standards and have done the greatest good in the fight against Covid-19 in this country," he said.