• As at Tuesday, at least 360 healthcare workers had been reported to have contracted the virus, out of which at least 41 are from Pumwani Hospital.

•According to DG Patrick Amoth, the 41 healthcare workers were from 290 samples with the remaining 100 staff members also expected to be tested. 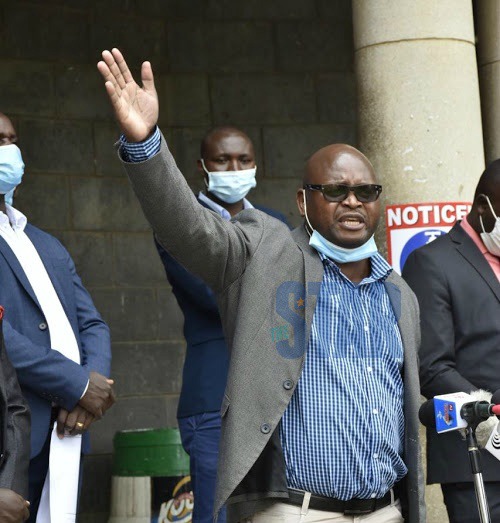 Healthcare unions have threatened to close down health facilities that do not meet safety standards after undertaking inspection.

Speaking on Tuesday, the unions said health care workers face a myriad of problems, including understaffing, lack of quality Personal Protective Equipment, lack of proper supportive welfare for workers at all levels and lack of designated  facilities for both isolation and quarantine.

The inspection is expected to start in Nairobi county targeting all health facilities from dispensaries up to level 6 facilities.

"We will start with Nairobi but we will lay down a programme for countrywide inspection. All the facilities that do not meet the standards we will shut them down," Kenya National Union of Nurses SG Seth Panyako said.

"PPEs can only be there when they are protecting our healthcare workers and not when someone at the ministry says so."

Panyako was reacting to a statement by Health CS Mutahi Kagwe, who on Monday said Kenya has more than enough PPEs'

Kagwe puts hospitals on the spot over PPE distribution

Says Kenya has more than enough PPEs and it's up to facilities to distribute well.
News
1 year ago

The union officials noted that dispensaries have been classified as low risk in terms of infections yet the country has an established community transmission level.

As at Tuesday, at least 360 healthcare workers had been reported to have contracted the virus, out of which at least 41 are from Pumwani Hospital.

According to DG Patrick Amoth, the 41 healthcare workers were from 290 samples with the remaining 100 staff members also expected to be tested.

“All these 41 have been on home-based care isolation and two have been discharged from home-based isolation care. The remaining 39 are doing well,” Amoth said.

The cases involve different staffers who work within the premises of the hospital, including 14 nurses, two medical officers, two clinical officers, and one laboratory officer.

He added that the government will support all the affected healthcare workers and that an isolation unit within the hospital has been created.

Reports further indicate that at least 85 per cent of health workers are yet to receive their May and June salaries.

Additionally, three have succumbed to the virus.

"We are not enough but we have continued to work. We have even lost our own. The loss of one healthcare worker is equivalent to losing 1,000 Kenyans," Kenya Union of Clinical Officers SG George Gibore said.

The officials noted that despite a directive to hire additional health workers to help in combating the virus, only interns have been sent to the health facilities.

They noted that all these factors had contributed to the upsurge of healthcare workers infected with Covid-19 and which puts their families and the public at risk.

"Don't provoke healthcare workers in the middle of a pandemic. We will go to the streets and Kenyans will suffer." the unions said.

The union further faulted the manner in which Kisumu Governor Anyang' Nyong'o is handling the health docket, adding that he should move with speed and implement the CBA and ensure striking health workers go back to work.