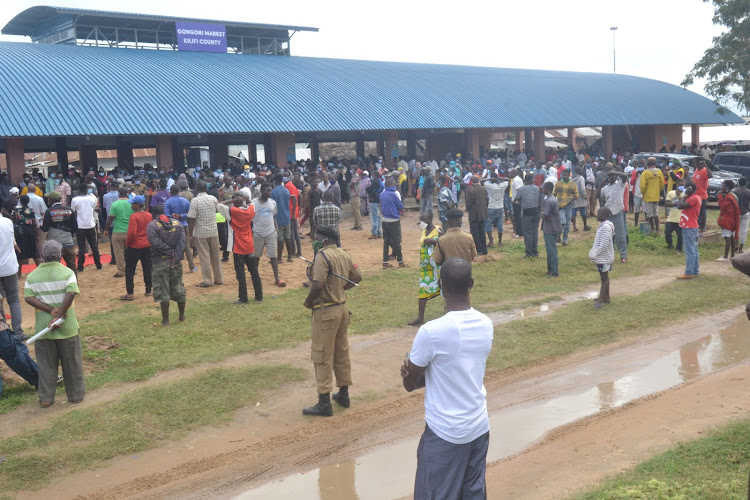 The drama unfolded after hundreds of residents turned up at the market, some without wearing masks and cheering causing panic to Kingi and his entourage.

Sensing danger, Kingi, who was accompanied by area MP Michael Kingi, CECs and ward reps, grabbed the microphone and threatened to suspend the meeting.

Kingi said he would not continue with the meeting if the residents didn't behave due to Covid-19 threat.

"I cannot allow the meeting to continue if you don't observe social distance. Many of you have no masks, it will be bad for me to come and contribute to the spread of Covid-19," he said.

He pleaded with them to take the virus seriously as continuous defiance to the rules could lead to deaths.

His enforcement officers and other county officials had to intervene and disperse the residents to ensure social distancing.

He later agreed to proceed with the meeting but warned residents against going against the Ministry of Health guidelines.

Kingi said Kilifi county has 54 cases two months after recording the first six cases because of ignorance by the residents.

He said although there are ongoing talks between the counties and the national government, he wonders how the situation would be if residents continue contravening the rules.

"Opening the economy is not an issue but what matters is discipline. If we are allowed to open, will you be able to abide by the rules?" he posed.

The pandemic, he said, had not even reached its peak as experts said it would be witnessed beginning September.

"I urge you to exercise self-discipline, protect yourself by always wearing a mask, wash hands, or else in the near future we will have many challenges,'' he said.