• A faction pushing for Duale’s ouster claims to have secured enough signatures.

• The Star has established most have given the bid a wide berth for fear of contradicting party position. 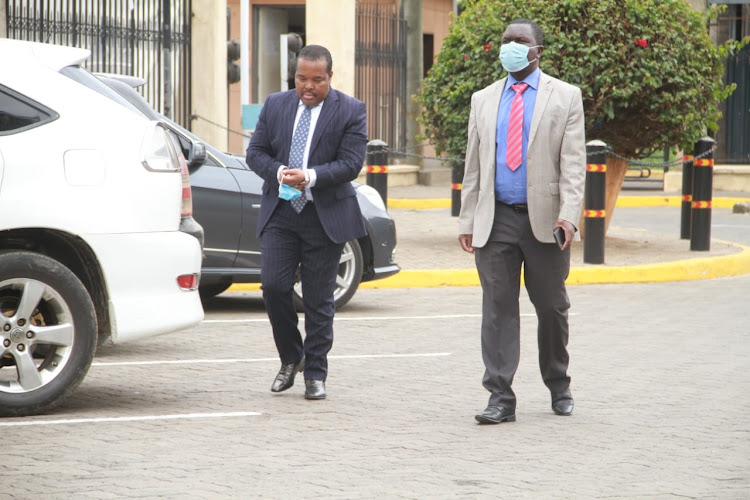 The majority of Jubilee MPs are on the horns of a dilemma over a fresh push to kick out National Assembly Majority leader Aden Duale.

A faction pushing for Duale’s removal claims to have secured enough signatures, but the Star has established most have given the bid a wide berth for fear of contradicting party position.

The Jubilee Party constitution requires that party positions be made in writing and that no member should be punished for not honouring unwritten positions.

Those cautious of the Duale removal clamour say President Uhuru Kenyatta made clear his decision to retain him through a statement by State House that followed the Parliamentary Group meeting on June 2.

The statement was taken as the official party position, which is yet to be contradicted.

But the faction of Jubilee lawmakers led by Kieni MP Kanini Kega has proceeded with the bid to remove Duale, despite the President’s endorsement last Tuesday.

On Monday, Majority Whip Emmanuel Wangwe (Navakholo) and his deputy Maoka Maore (Igembe North) said they had a petition backed by 126 MPs.

“We have submitted the petition to the President and after consultations, the secretary general will communicate when the PG will take place,” Wangwe told journalists at Parliament Buildings.

While some MPs supporting Duale's ouster claimed that a PG had been convened for Wednesday, Jubilee secretary general Raphael Tuju dismissed the allegations. Tuju said the PG can only be convened by the President.

“There is no such PG. A PG is only a PG when the President has convened it and is chairing it. Even if all members of Parliament meet and the President is not there then that is not a PG,” Tuju said.

Tuju confirmed that the MPs had resolved to send their petition to the President and would now wait for communication.

The standing orders and the Jubilee constitution require that the removal of the Leader of the Majority or Majority Whip must be backed by a majority of signatures of the party or coalition together with minutes of a PG.

Wangwe and Maore made the remarks after a botched meeting convened at the Jubilee headquarters, Pangani, allegedly to deliberate on Duale’s matter.

Initially, Wangwe had sent out invites to lawmakers to the Jubilee meeting because he had received a petition with enough signatures against Duale.

“Hon Jubilee member of the National Assembly, following the petition to my office by the MP for Kieni on behalf of over 120 others, you are hereby invited for a Jubilee MNA meeting tomorrow the June 8, 2020, at the Jubilee Party headquarters at 2pm,” read the invite sent out by Wangwe on Sunday night.

However, moments to Monday noon, Wangwe sent out another alert cancelling the meeting.

“Hon Jubilee coalition member of the National Assembly, after consultations it was agreed that the petition be forwarded to the party leader; therefore, the meeting scheduled for today at party headquarters has been postponed until further notice,” read the second SMS to Jubilee MPs.

When pressed, Wangwe and Maore failed to disclose the names of MPs who had signed the petition.

On Monday, Nyeri Town MP Ngunjiri Wambugu, who was initially the key proponent of Duale’s removal, said the party position on Duale was final.

"There are no instructions to remove Duale post-last week’s PG. These are just some leaders playing supremacy politics for personal interest," he told the Star on the phone.

Ngunjiri, a star of the Kieleweke wing of Jubilee, said the status quo remains.

“There has not been any other public statement or pronouncement from State House denouncing Duale’s retention,” he said.

Soy MP Caleb Kositany said that the newly "picked" Majority Whip and his deputy should be fired for going against the party.

He said failure to share the list amounts to blackmail and "a ploy to sneak in the motion of Duale removal to the President ".

"We have heard all manner of street gossip in this town. Some are saying Uhuru never called out Duale’s name. Was he to be called out for an award? Let the new hyper guys go slow. There are no signatures and Duale is a performer. Let's be democratic enough and give credit where it's due," he said.

Belgut MP Nelson Koech said that "some people had collected money from some leaders with a promise to secure them house leadership positions."

"Those behind the plan to remove Duale are desperately looking for signatures. The maximum they would get was just 41. Let them return the money they collected from a certain MP they thought would be given the position," Koech alleged.