Kenya might close TZ border as truckers drive up anxiety

Out of the 28 cases reported on Monday, nine were drivers who came from Tanzania. 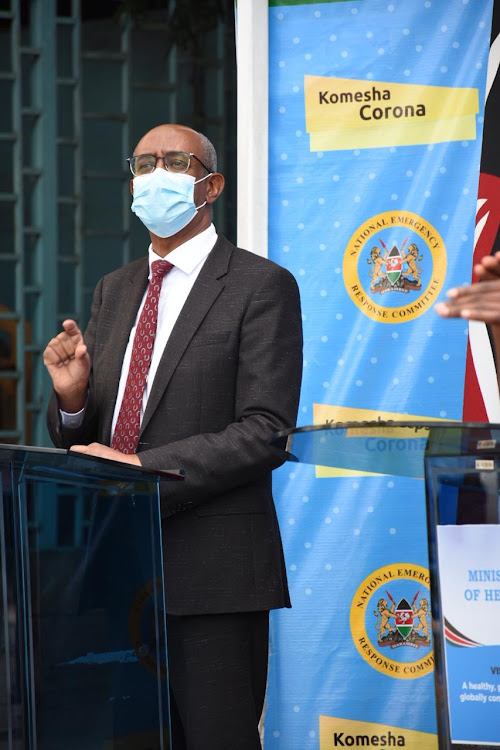 BRIEFING: Health CAS Rashid Aman during a press conference on coronavirus pandemic at Afya house on May 11, 2020.
Image: MERCY MUMO

Kenya might soon close its border with Tanzania after it emerged that truckers from the neighbouring country were spreading coronavirus.

Out of the 28 new cases reported on Monday, nine were Kenyan truckers who had come into the country through the Namanga border from Tanzania.

Health CAS Rashid Aman said five other individuals from Tanzania tested positive for the virus and were sent back to their country.

“On the issue of closing the border, every possibility is on the table and up for discussion and when the time comes and it is necessary, that measure will be taken,” Aman said.

Acting Health DG Patrick Amoth said all measures were on the table.

“We keep them there as they await their results which we then convey to them because it will be easy to do contact tracing on their side rather than allow them to cross and of course put our people at risk,” Amoth said.

Similarly, those staying at the porous border have been urged to be vigilant and report any cross-border movement. The number of infections in border counties has continued to grow.

The most affected counties are Wajir, Mandera and Migori that have in the recent past recorded cases from individuals who had a history of travel from neighbouring countries.

Kenyans will now be required to take a Covid-19 test as a prerequisite for admission to any health facility.

The government announced the death of a 33-year-old man, the first victim in the 30-39 age bracket since the first case was reported in the country.

Normally, individuals aged between 30 and 39 are asymptomatic.

“It is because of this that as the case management team we are reviewing our guidelines to make it possible for everybody who is admitted in a facility for one reason or another is able to have a Covid-19 test,” Amoth said.

He said deaths in hospitals put healthcare workers at risk of contracting Covid-19. There is also the possibility of transmitting the infection to other patients in the wards.

“There are other patients in the wards undergoing various treatments. Their immune status may be compromised therefore putting them at the likelihood of getting the infection in case they come into contact with a Covid-19 case,” Amoth said.

As at yesterday, the number of positive cases in the country stood at 700 after 28 more cases were confirmed by the Ministry of Health.

The 28 were from 841 samples tested in a day. The total number of tests conducted since the first case is now 32,938.

Twelve more people were discharged from hospital, bringing the total number of recovered patients to 251.

The new cases are aged between eight and 63 years, comprising 22 men and six women.

Seven are from Nairobi, 10 from Mombasa while Kajiado and Wajir recorded nine and two cases respectively.

One more patient, however, succumbed to the virus, making the total number of fatalities 33.

Kenyans were warned against falling prey to unscrupulous individuals out to make a killing by selling herbal medicine purported to cure the coronavirus.

“We want to tell Kenyans that many of these products that are out there do not have any scientific evidence as to their effectiveness but more importantly we know that in a situation like this, there will be some who will want to profiteer from this uncertainty claiming certain advantage to their products,” Aman said.

The CAS said the ministry was not against innovative ways of combating the virus, but it should be done in a scientific way.

Kenya has identified some traditional and herbal medicines likely to treat Covid-19.

The front-runner is a herbal product developed by the Kenya Medical Research Institute to treat herpes simplex, a common viral disease that causes sores on the mouth and genitals.

Post a comment
WATCH: The latest videos from the Star
by MAGDALINE SAYA REPORTER
News
12 May 2020 - 08:15
Read The E-Paper