Tangtanga MPs to work from Jubilee headquarters in Pangani 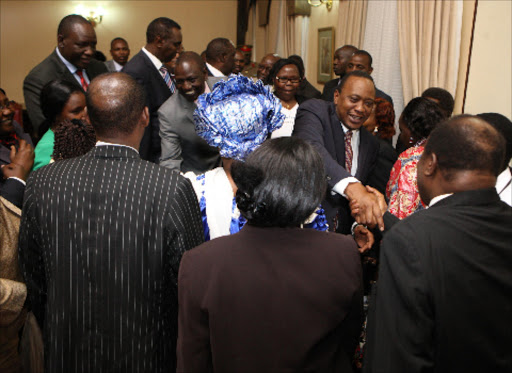 Some Jubilee MPs want new members appointed to the powerful National Management Committee and the Elections Management Board.

That will be part of the agenda of a meeting this week at Jubilee headquarters in Pangani, party deputy secretary-general Caleb Kositany, who is the Soy MP, and Gatundu South MP Moses Kuria said Sunday.

The two are close allies of Deputy President William Ruto.

They said the DP will attend the meeting which, they hope, will fix the party wrangles by ensuring the NMC is in place to run the party and tame officers believed to be working against the DP’s political ambitions.

"NMC is appointed by NEC, who will also appoint the elections board. Our agenda is to ensure jokers and brokers are not in the party. We don’t want the party to be run from bars," Kositany said by phone.

The MPs intend to use the occasion to push for Jubilee elections. Before the coronavirus pandemic, the call for elections had opened deep cracks within the ruling party.

The latest development comes after officials allied to Kieleweke faction of the party appointed five new people to the powerful NMC to replace three who had joined the public service.

“Our appointment of NMC officials will help us run the party well and the new elections board in place will help us have free, fair and credible polls so that the majority in the party have a say,”  Kositany said.

According to him, the anticipated changes are meant will ensure the party "is not run from bars and the seven million shillings we contribute every month is put into good use.”

The MPs' other demands will be the minutes of all meetings held by party organs, the list of employees and the audited financial results.

They are putting structures in place to help them to be directly involved in the party transition.

They will use the documents to streamline party activities, decide how the party will run and start working at the party headquarters at Pangani.

“We are thinking of going to the party headquarters from tomorrow (Monday) so that we take over the party,” Kositany said.

Kuria said they will start working from the party headquarters as early as Monday to kick out businessmen allegedly influencing party policies.

“Pursuant to the directive from the Registrar of Political Parties, Jubilee MPs have resolved to start working from Jubilee House from Monday, 20 April to facilitate the resolution of the misunderstandings and interpretation of the party constitution,” Kuria said.

The MP said they want to use the opportunity to solve the misunderstandings and forge a united, cohesive and democratic nationalist ruling party.

“Kenyans have a bigger stake in this party. See you there at the party on Monday,” Kuria said.

The MPs said they will develop the timeline of activities, come up with the party elections date, whip a common agenda and directly be involved in the day-to-day activities of the party.

“We (Jubilee MPs) have a WhatsApp group where some of us had proposed Monday but we had not agreed. We want to go there,” Kositany said.

“Party organs will be meeting as required by the law and we will also ensure Jubilee serves the masses."

The Soy MP said they will also demand how their Sh7 million monthly contributions have been used.

The two MPs accused the head office of isolating them "but we are going to assume our roles to ensure good leadership and equity.

“We are not foolish. We are going to be involved in every activity. The National Executive Council will plan elections, appoint the management committee and the elections’ board immediately after Covid-19,” Kositany said.

He maintained they have already informed the registrar of their intention.

The MPs said the party will announce 60 positions available in the coming polls.

They challenged the Kieleweke faction to leave the party if it is strong enough.

“If Kieleweke are men enough they should leave. We will work with everybody. Let them stop,” Kositany said.