No new case reported Thursday, Kenya has only seven patients

• Cabinet approved the request Thursday in its weekly meeting at State House in Nairobi.

• Kenyans will now be policed by chiefs and the Nyumba Kumi officials, who will ensure they are no large gatherings anywhere. 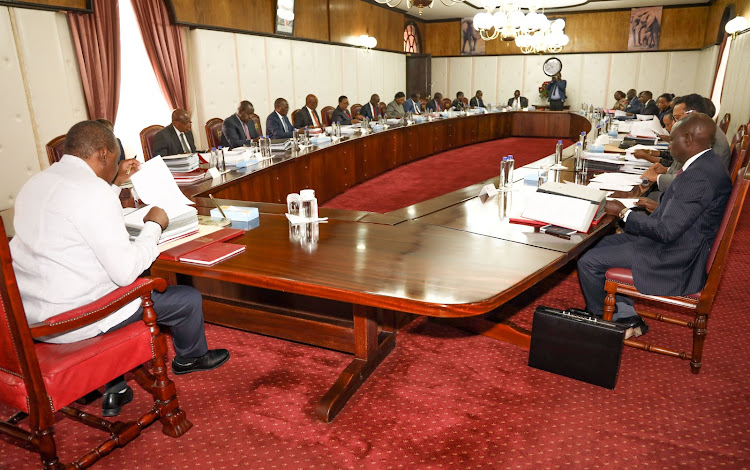 The government has defined at least nine services which must remain in place in the event of a complete shutdown of the country if coronavirus infections spike.

All agencies offering services in the water, health, security, air traffic control and civil aviation, fire services, ports, financial and transport sectors are essential services and are not to downsize staff in any manner.

The Cabinet Thursday discussed a possible shutdown but deferred any decision to impose a total lockdown on Nairobi or any part of Kenya even though preparations are in place.

No new coronavirus cases were reported on Thursday.

The details of the essential services are contained in a confidential circular by the Head of Public Service Joseph Kinyua to all government departments, Parliament, Judiciary, counties and parastatals dated March 17 and obtained by the Star.

State and public officers serving in senior ranks of the Executive, Parliament and Judiciary have been designated as providers of critical public services.

"Each government agency shall immediately determine the range of services critical and essential in the discharge of its core mandates, and therefore shall prepare a schedule for coverage of such services," Kinyua said.

The Head of Public service said the new measures will remain in place until further notice.

"A report on the critical and essential functions retained at current employment, the services identified for home-based deployments, the rota for those who remain in the office during this period, and confirmation of hygiene measures instituted in the workplace is to be provided to this office by  Saturday 21st March," added Kinyua.

On Thursday, the Cabinet said Kenyans will now be policed by chiefs and the Nyumba Kumi officials, who will ensure there are no large gatherings anywhere.

"To this end, the government is further directing the involvement of Nyumba Kumi leaders, chiefs and subchiefs in ensuring compliance to these directives," Health Cabinet Secretary Mutahi Kagwe told journalists Thursday.

China has offered to build a Sh8.3 billion research facility in Nairobi to combat the outbreak of diseases like the coronavirus.

Cabinet approved the request yesterday in its weekly meeting at State House in Nairobi.

The 21-storey building will be put up in Nairobi and has the backing of the African Union and the World Health Organization.

It will primarily house the African Centre for Disease Prevention and Control (Africa CDC), which will be relocated from its current base in Addis Ababa because Ethiopia lacks the advanced medical research infrastructure already existing in Kenya.

"The Africa CDC will position Kenya as a regional and continental hub in medical research and disease control, and give the country a head start in combating disease outbreaks like the current coronavirus pandemic," State House said in a statement.

Kagwe said Kenya still has seven patients only, and all of them are mild cases and had contracted the virus abroad.

“All the seven are doing well under the observation of the Ministry of Health and KNH staff,” he said.

Six of the patients are Kenyan, while one is a Burundian.

Two of the Kenyans were on Tuesday allowed to go and recover at home in Kitisuru in Nairobi because the ministry said they proved they had the capacity to self-quarantine at home.

Kagwe said between Wednesday and Thursday,  they tested another eight people, all of whom turned negative.

"We have so far managed to screen close to 600,00 people who have entered our country in all entry points. We have also tested 173 people out of which seven have turned out to be positive," he said.

He said Kenyans should also be prepared for random testing in high-risk areas that may include matatus and health facilities, beginning Saturday.

This is likely to be an observatory exercise where those picked out will have their body temperatures taken and screened for other symptoms.

The most common symptom of infection with the coronavirus is a fever — about 90 per cent of patients suffer from it, according to the World Health Organization.

The temperature elevation that is considered "abnormal" depends on the age of a person and the site where the temperature is measured.

The temperature under the armpit, also called axillary temperature, is considered to be abnormal when it is above 37.5 degrees.

People with active coronavirus also have a dry cough and sometimes, shortness of breath.

"The exercise to be coordinated by the Ministry of Health will also involve other stakeholders such as the Red Cross and security personnel," Kagwe said.

The CS also expressed frustration that Kenyans are not taking seriously the measures announced to stop the virus.

He said they are still congregating in social places like pubs and continue to take their children for outings.

"It cannot be unreal in Kenya and yet it is real in China, Italy... sometimes one is baffled with reactions that we are getting," he said.

"Please let us take this matter seriously. We will embark on random screening commencing this Saturday."

He warned clubs to stick to their authorised operation hours or lose their licenses.

The ministry also announced nurses and clinical officers who worked in West Africa to control Ebola, will also be enlisted to help action against coronavirus.

Some of the 170 nurses, clinical officers doctors and laboratory technicians have remained jobless after fighting Ebola in Sierra Leone and Liberia in 2015.

They stayed there for between three to six months under an African Union (AU) mission.

Separately, the government also set up a Sh14 billion special fund to pay genuine suppliers to the Prisons Department and the National Youth Service (NYS).

The move followed ongoing efforts to cushion the economy from the uncertainties caused by the pressure to contain coronavirus.

The decision was taken by the Cabinet in Nairobi.

The Cabinet also directed cabinet secretaries for Agriculture, Livestock, Fisheries and Cooperatives and Treasury to establish a National Food Reserve system which will procure receipts through competitive commercial processes using the Warehouse Receipt System so as to avoid market distortions.

Businesses scale down, ask employees to work from home amid fears of economic meltdown
News
2 years ago

More attention and focus needs to be on the overall health policies in the country.
Opinion
2 years ago

The camera accuracy levels are ±0.5 degrees, and through a combination of Artificial Intelligence (AI) face detection, which enables multiple target ...
Business
2 years ago
by JOHN MUCHANGI AND MAGDALINE SAYA
News
20 March 2020 - 06:00