• The government now says locusts are safe for human consumption.

• Through its spokesman Cyrus Oguna, the government dispelled fears that the desert locusts may be harmful to human. 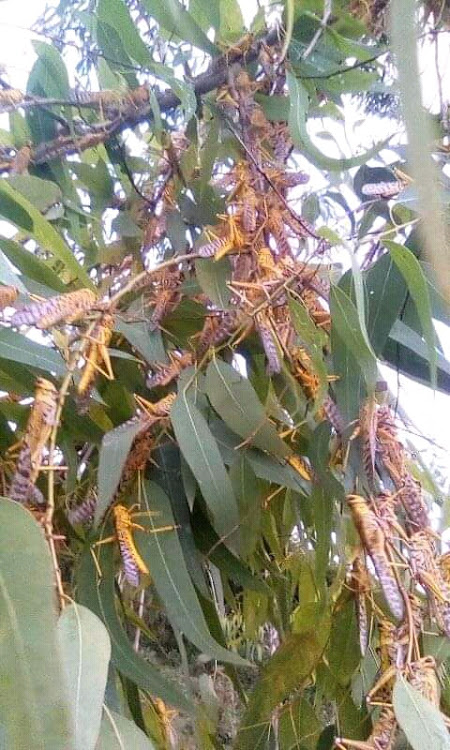 Some of the locusts on a miraa plant in Meru
Image: REUBEN GITHINJI

The government now says locusts are safe for human consumption.

Through its spokesman Cyrus Oguna, the government dispelled fears that the desert locusts may be harmful to human.

Speaking in Meru County on Thursday, Oguna said communities that feed on desert locusts have no reason to be afraid as they are not harmful even if sprayed with insecticides.

Earlier, Bungoma residents had been warned against consuming the locusts on grounds that they might be carrying pesticides.

The residents who had been waiting for the locust early were disappointed after the County Executive for health Mathews Makanda said the locusts are sprayed with insecticides elsewhere and may be harmful to human beings.

Dr. Muo Kasina says the locusts are rich in proteins and should be harvested.
News
2 years ago

'They may have migrated to the county after they were sprayed somewhere else so let our people not turn them into vegetables,” Makanda warned.

But Oguna said the insecticides have been subjected to rigorous testing and have been declared not to be harmful to human health.

“I know there are parts of this country where the insects are delicacies like in Western because they are very rich in protein. Duration of oxidation is very low so once they have been sprayed within two hours the drug is oxidized and is not harmful at all,” Oguna said.

According to him, the locusts have so far invaded 21 counties and that they have started breaking into small groups instead of swarms as they look for appropriate areas to lay their eggs under the ground.

He said owing to this change of operations of the locusts the government has found it fit to have expanded the number of teams to do ground spraying and also educated on how to identify the young locusts so that they can be sprayed when they are on the ground.

Oguna was speaking at the Embu talent academy when he presided overviews seeking forum on the intended law to manage the NationalIntegrated Identification Management System (NIIMS) popularly known as Huduma namba.

Government to use stronger spray to fight locusts - Oguna