How Moi hid in the bush during 1982 coup

The President demanded of the Sumbeiywo brothers: Do you think I am a coward?

• The plan was to leave Moi and his guards hidden in the bush, without vehicles, tents or other identifying supplies. 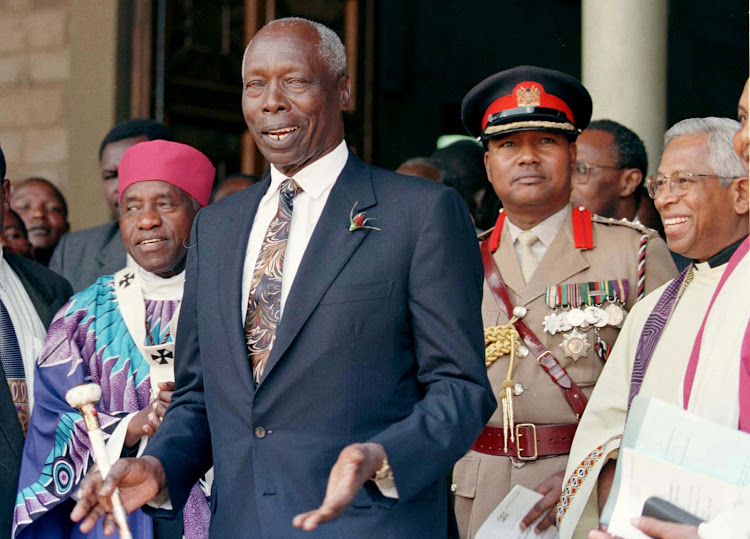 Departed President Daniel Moi hid in a bush at Kabarak after he heard that there was an attempted coup in 1982, according to The Making of a president," a book authored by  Andrew Morton.

Morton tells of a shrill, anxious sound of a telephone that shattered the still of August 1, 1982, morning.

Elijah Sumbeiywo, the President's senior bodyguard, received the call at 3am.

The caller told him that the army had staged a coup and that the rebel troops were advancing on Kabarak, Moi's modest home a few kilometres north-west of Nakuru town.

"As Sumbeiywo dressed quickly, he made a phone call to his brother Lazarus, then an army major stationed in Nakuru. He knew nothing about (the) force's involvement in the uprising and raced to join his brother at his quarters at State House, Nakuru," the book says.

Together, they drove to Kabarak in Lazarus's Peugeot 204 car, where they found 50 presidential guards in a state of armed agitation.

"Sumbeiywo armed himself with two sub-machine guns and strapped ammunition belts over both shoulders in the manner of a South American revolutionary," Morton's book says.

Sumbeiywo promptly went in to see Moi who he found casually dressed in a blazer and grey slacks, talking on the phone.

He seemed calm, concerned to ease the tension and fear of those milling in and out of the room.

By then it was 5am and it had been established that it was not the army but elements of the Kenya Air Force. They had mutinied, putting into operation a secret plan to take over the country by securing strategic sites in Nairobi, notably Jomo Kenyatta and Wilson airports, the General Post Office and the Voice of Kenya radio stations.

"It was from the latter studios at dawn that a shaky voice announced that Moi, who had been President for just under four years, had been overthrown and his government replaced by the National Redemption Council," Morton wrote.

After condemning Moi's government as corrupt and dictatorial, the anonymous voice on the radio announced the release of all prisoners, before bizarrely playing reggae music by Bob Marley and Jimmy Cliff.

But it was not only Moi in danger. Assistant Minister John Keen nervously paced the floor of his home in Ngong.

Days before the attempted coup, Keen, who was responsible for internal security, had warned the President personally about the imminent coup and suggested that he should cancel his trip to Libya.

Keen then called Ben Gethi, the tough head of the dreaded General Service Unit, and asked him to send a Land Rover with some troops and machine guns because he realised that if the coup were successful, his name would be one of the first on the death list.

"The firefight was so intense. Keen, fearing that the rebels would soon come for him, sent his children and wives to their farm buildings about a quarter of a mile from his house ordering them to stay there even if they heard shooting," he said.

But Keen was not the only politician afraid to get into the death list.

When Philip Leakey, who lives on the edge of Nairobi National Park heard an announcement at the Voice of Kenya that all MPs had to wait in their homes to be arrested, he decided to go on the run.

"He quickly packed a bag with a blanket and essential supplies, took his rifle out of the safe and headed for the bush," he said.

Charles Njonjo was also pacing his room for he knew that he was a wanted man.

With his hooded eyes, inscrutable mandarin manner and gift for the pithy put down, the man had plenty of enemies whose members formed the bulk of the Air Force rebels.

At first light, armed airmen came running to the home of a woman who was his neighbour,  mistaking it for Keen's house and fired off several rounds of ammunition in its direction.

"I was in fear of my life. Bombs dropped from an aeroplane near my home. I was certainly the target. That is what has made me so furious – the suspicion that I had anything to do with the coup," Njonjo told Morton.

HIDES IN THE BUSH

As they reviewed the certain prospect, he said to the President: "Your Excellency, can we move away from this house as it can be bombed?"

But an adamant Moi refused and needed some quick convincing. "No, I am not moving from this house. Do you think I am a coward?" he demanded of his escort commander.

But this answer did not deter Sumbeiywo from moving his boss to safer ground. He went and took the President's arm and said: "Let's go!"

Sumbeiywo squeezed into his brother's Peugeot and followed by dozen of guards in other cars, headed off into the bush, putting several miles between themselves and Kabarak.

Initially, the plan was to leave Moi and his guards hidden in the scrub, without vehicles, tents or other identifying supplies until the news from Nairobi became clearer.

WE WILL DIE FOR YOU

As Sumbeiywo prepared to leave for Kabarak to renew radio contact with the security agencies, he told the President that they were ready to die for him.

Though moved by Sumbeiywo's gesture, Moi adamantly refused this sacrifice.

"You have wives and children and there is no need to throw your lives away for one man," he said.

After an hour, the escort commander returned from Kabarak accompanied by Rift Valley Provincial Commissioner Hezekiah Oyugi who made similar gesture of support and sacrifice.

Moi, then facing the possibility of death, was deeply impressed by their loyalty.

With the situation in Nairobi still unstable, Sumbeiywo had two plans in mind. The first was to drive to Eldoret, and then fly Moi out of Kenya.

Alternatively, they could head north-west and rally the Pokot, fiercely loyal warrior tribe who would have fought to the bitter end to protect their Kalenjin president.

After a while, they decided to take the President to the latter option.

They had only set out the journey when they were told on their military radio that the army was now in control of the capital and that it was safe for the President to return to Kabarak.

During these hours of uncertainty, Moi ordered several lorry-loads of loyal troops to Kabimoi to evacuate his former wife Lena to a place of safety.

But Lena flatly refused to be evacuated. "Instead she invited the officers into her house telling them that she had a telephone that reached from Kabimoi to heaven. The men went inside and removed their caps while she knelt in supplication," the book reads.

As she prayed for Kenya, a soldier sitting outside listening to the radio suddenly cried out in delight. He yelled the news that Moi himself was on the radio saying that the enemy had been defeated. The officer then told Lena that her prayers had been answered.

Moi's reassuring message had been recorded as soon as Moi arrived back at Kabarak from his hiding place in the bush.

However, in spite of urging of Sumbeiywo and assorted military and police chiefs who had now gathered at Kabarak, Moi refused to make the short journey to State House, Nakuru, in an armoured car.

He insisted on going in his blue presidential Mercedes.

The convoy barrelled out of Kabarak late on Sunday morning with bodyguards and sub-machine guns at hand clinging to the sides of the escort cars which surrounded the presidential limousine.

When they had reached the safety of the compound they radioed Nairobi from where senior military officers advised the President to remain in Nakuru, since it was their view that the capital was still dangerous.

"Once again, Moi would have none of it, arguing that he should be back in the seat of government. His view prevailed and this time a convoy of 50 vehicles including armoured personnel carriers crammed with soldiers set off on the two-hour journey to Nairobi," Morton writes.

The crowd, vendors and hawkers watched the procession with a kind of sombre perplexity, not knowing whether their President had been taken captive by the military.

Even when Moi gave the single finger Kanu salute, they dismissed it off as a display of bravado by the supposedly deposed head of state.

According to the book, gunshots could still be heard in the capital. As they stormed by the Silver Springs hotel, the crackle of gunshots aimed at the convoy erupted from within.

The presidential guard held their fire and Moi was safely installed at State House. It was many hours before order was restored in the city.

During the eight-hour pandemonium, women were raped and children beaten up while men drank themselves into an alcoholic stupor.

According to the book, about Sh640 million worth of damage was caused by the brief rebellion with 152 people losing their lives.