US all-cargo airlines will fly between Kenya without needing to stop in the US.

• The Amendment adds seventh-freedom traffic rights for all-cargo operations to the bilateral Air Transport Agreement and will enter into force following an exchange of diplomatic notes. 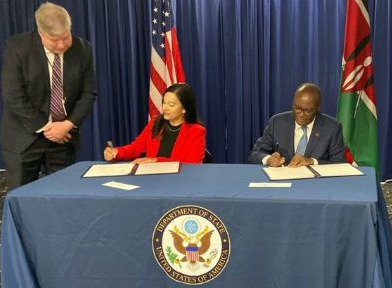 Transport CS James Macharia and US Assistant Secretary of State for Economic and Business Affairs Ms. Manisha Singh during the signing of an amendment to the Bilateral Air Services Agreement between the two countries.
Image: COURTESY

Kenya and the United States on Thursday signed an important Amendment to the U.S.-Kenya Air Transport Agreement.

The Amendment adds seventh-freedom traffic rights for all-cargo operations to the bilateral Air Transport Agreement and will enter into force following an exchange of diplomatic notes.

"It has been applied on the basis of comity and reciprocity since it was negotiated on December 4, 2019," read part of a statement from the U.S State Department.

According to US government spokesperson, the rights in the Amendment will facilitate the movement of goods throughout the world by providing air carriers greater flexibility to meet their cargo and express delivery customers’ needs more efficiently.

"Specifically, the Amendment allows U.S. all-cargo airlines to fly between Kenya and a third nation without needing to stop in the United States, an important right if operating a cargo hub," the statement said.

Kenyan all-cargo carriers will have reciprocal rights to serve the United States.

"This Amendment further expands our strong economic and commercial partnership, while creating new opportunities for all-cargo airlines, exporters, and consumers," the statement noted.

It added, "It will fully open the Kenyan air cargo services market to U.S. carriers, and represents one way in which the U.S. Government is delivering for U.S. all-cargo carriers and American workers".

The  Amendment between the United States and Kenya is also a step forward in liberalizing the international civil aviation sector in Africa – a region that has the potential to be one of the fastest-growing in the world.

In October 2018, Kenya Airways made history with its debut Nairobi-New York nonstop flight.

Covering a distance of more than 13,713km, and taking 15 hours 25 minutes on the outbound trip, the new flight was not only the first commercially scheduled non-stop service between Kenya and the US but also ranked as one of the longest flights in the world at seventh place.

So far Kenya Airways has completed 594 flights to and from New York since the launch of inaugural flight on October 28 last year.

Speaking during a one-year anniversary celebration in New York last year, KQ chairman Michael Joseph said at least 105,084 passengers had been flown on the route.

For  594 flights made in the year, KQ could have ferried a full 138,998 passengers on full capacity. This means the airline managed 75 per cent capacity since launch.

“Currently as we speak all our business class is fully booked on a daily basis and the economy is currently between 65 and 85 per cent full daily,” Joseph said.

KQ which had aimed a daily flight on the route but this was cut a few weeks later to five days a week, citing low demand during the winter season.

It, however, resumed daily flight in June on the Summer holiday peak especially for American tourists visiting East Africa.

Kenya Airways' has started selling tickets for its maiden direct flight to New York on October 28. Economy class fliers will paySh89,000 both ...
News
3 years ago

"Beginning June, Kenya Airways will increase its frequency to New York from five days a week to seven days a week. This is expected to open more opportunities for travelers to take advantage of this route during this high season,” KQ said in a statement.

The non-stop flight to the US was billed as a key in Kenya’s quest to boost the arrival of American tourists as well as deepen commercial activity between the two countries that have been trading partners since Kenya’s independence in 1963.

KQ had hoped to ride on high tourist numbers from the US  to increase its revenues by 10 per cent.

According to Joseph, a codeshare with Delta, all their passengers can fly from Nairobi to all the destinations without changing flights but they are seeking to expand the same this year.