DP termed those spearheading the narrative as “brokers and political cons”.

Deputy President William Ruto has said President Uhuru Kenyatta is not interested in extending stay in power, sharply contradicting close allies of the head of state.

Ruto, who is seen as the biggest political casualty of the radical push, termed those spearheading the narrative as “brokers and political cons”.

The DP spoke amid simmering tension in Jubilee with the President and his deputy resorting to nasty proxy wars.

But speaking yesterday, Ruto said the President respects the Constitution and would peacefully retire after his two terms in office.

“It is brokers and political merchants who are peddling that rumour across the country,” he noted. “We are progressives. President Kenyatta has a rich legacy which cannot be stained by the push for constitutional changes.”

He went on: “And for the avoidance of doubt, as a party, our party leader Uhuru Kenyatta, the Jubilee Party membership and the entire fraternity of Jubilee has no scheme or plan to change the Constitution so that we can take Kenya to the dark days where leadership stuck in a corner.”

As the Jubilee deputy party leader, Ruto insisted that the President was not interested in extending his term in office by changing the Constitution to perpetuate personal interests.

“We, therefore, ask those political cons to keep off Jubilee affairs. They should instead direct their energies to sorting out their party problems.”

On New Year’s Eve, ex-Jubilee vice chairman David Murathe said Uhuru would remain in power but in a different capacity, opening a new battlefront with the Ruto brigade.

Similar sentiments had been made by Cotu secretary general Francis Atwoli. 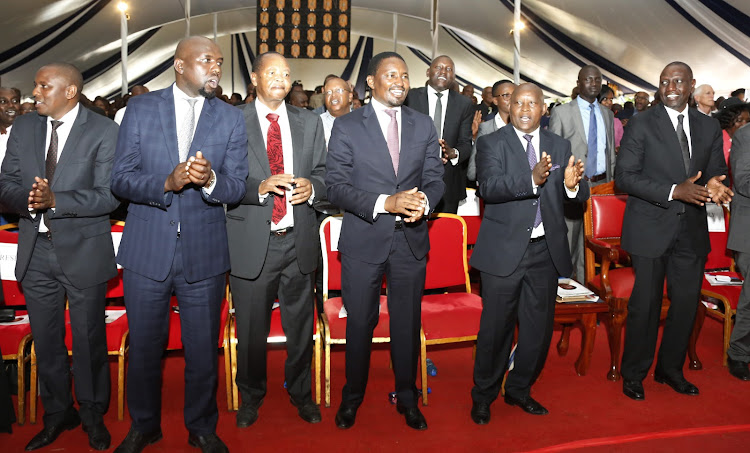 Speaking during the burial of Martha Kirigo, the mother to Mathira MP Rigathi Gachagua and the late Nyeri Governor Nderitu Gachagua, Ruto said the Constitution was for all Kenyans and as such any changes spearheaded through BBI would be informed by their needs. He was accompanied by Agriculture Cabinet Secretary Mwangi Kiunjuri, Nyeri Governor Mutahi Kahiga and a host of MPs.

Yesterday, his allies tore onto Atwoli and Murathe and said the BBI initiative should not be treated as an ODM affair

“Ignore those (drunkards) claiming that the President wants to extend his tenure. Unless he talks himself, do not take any word from them,” said Gatundu South MP Moses Kuria.

Uhuru and Ruto’s allies have been engaged in bareknuckled attacks that have threatened to split the giant ruling party.

Political observers say the marriage between Uhuru and Ruto has hit a snag and that the attacks being witnessed have the blessings of their masters.

“The marriage is over. Ruto knows that but he cannot attack Uhuru directly for fear of a backlash in Central. So, what we are seeing are actually wars between Uhuru and his deputy,” political analyst Martin Andati said.

The DP’s lieutenants have termed Uhuru’s handshake with Raila and the resulting BBI a fake relationship.

They have asked the head of state to pull out of the relationship before the party crumbles.

“This issue of BBI is a farce. It is just a farce that I don’t even see a future in. The President should leave this BBI and fake handshake and focus on the Big Four agenda,” Nandi Senator Samson Cherargei said.

Cherargei, a close ally of the DP, assailed Kieleweke members, accusing them of misleading the President to hang onto power after the expiry of his term in 2022.

Wahome says Uhuru plans to be PM with Raila as President:
Counties
9 months ago

Last week, Kandara MP Alice Wahome, a diehard Ruto supporter, scathingly attacked Uhuru, accusing him of being the biggest impediment to the growth of country’s economy, democracy and freedom of speech.

She described the President as an existential threat to the nation and alleged a plot to keep him in power as Prime Minister, with ODM leader Raila Odinga as President.

Yesterday in Ruto’s presence, Nakuru Senator Susan Kihika asked leaders to be honest and speak truth to power as Wahome. “She spoke the truth; we must speak the truth to power if we are to move forward together,” she said.

“If I were the President, I would have listened more to a member of Jubilee who was with me when I needed people to be with me rather than using Raila and ODM. ODM are still looking for the downfall of Jubilee for them to harvest from it and form government in 2022,” Soy MP Caleb Kositany told the Star.

But the President’s backers, who have also roped in Raila’s foot soldiers, have come out guns blazing, severely castigating the DP and his Kieleweke team for trashing the President for their selfish interest.

Chege wondered why Wahome did not attack Ruto, the President’s principal assistant, yet they have been running the Jubilee government together since 2013.

She termed Tangatanga’s sustained attacks on the President as cheap politics. “It is utter nonsense for an MP to prioritise issuing press conference in hotels and forgetting to work for her electorate,” she said.

“I challenge them (Tangatanga MPs) to come out and say whether they are in support of the BBI report or not. They can’t pretend to champion the rights of farmers by fighting BBI,” she added.

Nyeri Town MP Ngunjiri Wambugu accused pro-Ruto MPs of using the democratic space to fight the President instead of advancing the interest of their electorate.

“I wish she used this remarkable democratic space to agitate for the national unity, fight corruption and empower the people. Unfortunately, she has decided to fight the President. Sad,” he said.

Gem MP Elisha Odhiambo, an ODM member, said those attacking the President and the handshake are doing so on behalf of the DP.

“Of course, those are Ruto’s people. Ruto cannot come out to attack the President, so he is using his henchmen in Tangatanga to do so,” he said.

Malindi MP Aisha Jumwa questioned the secrecies surrounding the operations of BBI. “Where are the promised BBI report copies for Kenyans to read? Why seek to popularise what  no Kenyan has opposed? Those funds should be channeled to the Big Four agenda,” she said.

Uhuru and Ruto must report back to work

If Kenyans were to conduct an annual appraisal of UhuRuto, they would score poorly.
Opinion
1 year ago

Council says appointees are from the Kieleweke faction opposed to Ruto.
Counties
1 year ago