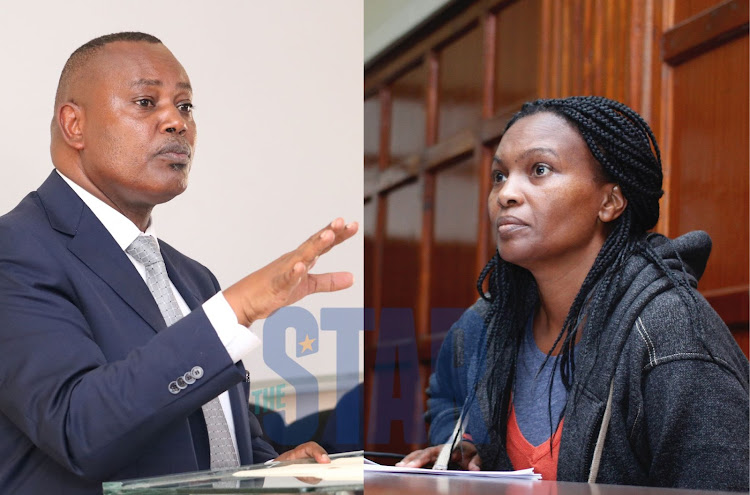 DCI George Kinoti has accused Sarah Wairimu of using contempt of court proceedings against him to settle grudges her lawyer Phillip Murgor has against the top detective.

Kinoti argues the application by Wairimu is a blatant abuse of advocate-client privilege, with the advocate using the application to channel his long standing malevolence against the DPP and DCI.

“The court should take judicial notice that Sarah Wairimu and her lawyer Phillip Murgor have since before and after the arrest been on every media and forum in Kenya including YouTube giving an alternative narrative of the material circumstances on this case and if anyone is in contempt of the court it is the duo,” he says.

He further claims the accused is using the case to advance her defense in the murder trial of her husband.

In a filing in response to Wairimu's contempt application, Kinoti says the application is a calculated attempt to put forward her defense in advance.

He says the application is a deliberate and contrived scheme by the applicant and her lawyer to prematurely argue her innocence.

Kinoti argues it is a calculated attempt to undermine the prosecution and investigative agencies in the trial.

The detective says the court has no jurisdiction to hear the application as no consent of the DPP was sought or granted to institute criminal contempt proceedings.

He further says the court hasn’t issued the mandatory 30 days notice to him prior to filing the application, adding that Sarah was introducing matrimonial property issues outside the jurisdiction of the court.

“That without prejudice to the above the DCI is entitled in law to issue public statements in respect of the investigations and subsequent charges of any crime as by law and Constitution provided,” he says.

He states it is the duty of law enforcers worldwide to provide full information where a crime has been committed.

Kinoti says Wairimu and Murgor want to control the investigations and the trial process and to step into the shoes of the DPP and the DCI while at the same time defending the case.