Why Raila is not resting easy over Kibra

• Kibra has been Raila’s political bedrock for over the last two decades and a loss would deal a staggering blow to his national image as a formidable politician.

• Raila personally reached out to losers in the primaries to back the ODM candidate Imran Okoth. 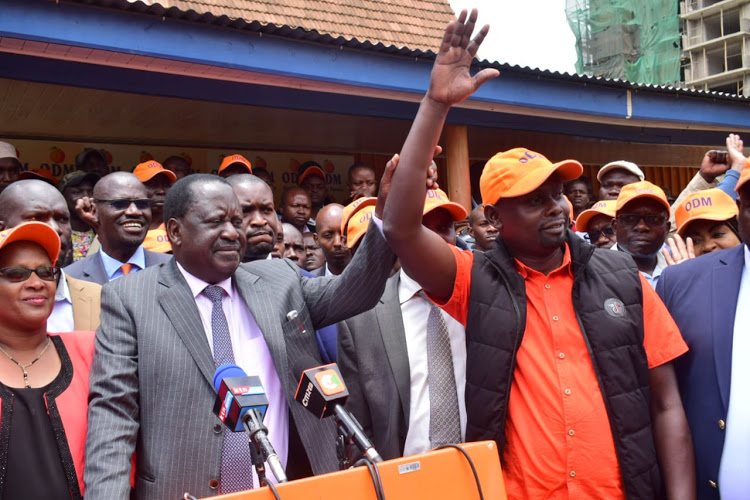 ODM leader Chief Raila Odinga is taking no chances in the Kibra parliamentary by-election that is shaping to be a duel between him and Deputy President William Ruto.

Unlike the two recent by-elections where ODM lost in Ugenya and Embakasi South, the former Prime Minister is fully involved in Kibra campaigns literally coordinating the Orange Party campaign machine.

Kibra has been Raila’s political bedrock for over the last two decades and political analysts say a loss would deal a staggering blow to his national image as a formidable politician.

“Raila's following is no longer as big as it used to be. His magnetism is wearing out and the Kibra seat contest appears to be fluid. If he loses,  that would be a message that he is on the way out of the minds of people,” University of Nairobi history lecturer Macharia Munene said

Former PM is fully involved literally coordinating the ODM campaign machine.Immediately it became clear that Ruto was spoiling for a duel, Raila ensured that ODM conducts party primaries pick its candidates in order to arrest possible fallouts from boardroom deals.

Despite reports that the poll was bungled by party officials, Raila personally reached out to losers in the primaries to back the ODM candidate Imran Okoth.

Kibra is perceived as ODM’s bedroom and any attempt to snatch the seat from Raila will come with political ramifications.

It will hand DP Ruto a bragging right ahead of 2022 given he had managed to win Langata parliamentary seat which was also been under the firm grip of the ODM leader.

According to analyst Dantan Omari, Raila’s raw nerve is touched by the contest in Kibra and losing the seat will water down his political relevance something he has built over the years.

“Kibra is Raila, Raila is Kibra. Raila does not have constituency called Bondo, it is Oburu’s. Raila believes in representing a national constituency in Nairobi. Originally Raila was seen as a Luo, he had come to Kibera to cut a national niche. If Ruto succeeds to take the seat through Mariga, he would have destroyed the enigma concept Raila is enjoying,” Omari said.

On Tuesday, Raila - in another first-chaired a Parliamentary Group meeting at County Hall, parliament building where he formally introduced Imran to ODM elected MPs in both Houses of Parliament.

Suna East MP Junet Mohammed, a close Raila confidant, told the Star that the meeting was generally to formulate ways of clinching the seat.

“We were just seeing how to bring on board all our MPs elected on ODM party to support our candidate in Kibra,” Junet said.

It is during Tuesday’s meeting that the ODM leader spelt out the campaign strategy to recapture Kibra.

In the ODM bags of tricks to recapture the seat, beginning this weekend, the lawmakers will be segmented in groups and deployed to comb the five wards in turns.

According to sources who attended the meeting, the party will be moving from door to door and meeting people in small groups as opposed to staging major rallies.

But towards the tail end of the campaigns, Raila will pitch camp in the area addressing rallies as he makes the last appeal to voters.

The County Hall meeting was followed by a Wednesday fundraising where over Sh7 million was realised with Raila himself making a donation of Sh1 million.

ODM has lost in the three parliamentary contests since last elections, slicing the number of its elected MPs from 62 to 59.

Jubilee has 141 elected MPs out of the 290 constituencies.

The losses in Ugenya and Embakasi South in the April 5 by-elections were blamed on bungled nominations and poor strategy.

The daggers are already drawn in the race billed as a national heavyweights' contest .
News
2 years ago

Kibra is intertwined with Raila’s past and future

Any serious contender for the seat must contend with Raila’s legacy.
News
2 years ago

DP's goal is to wrest Kibra from his nemesis Raila and bolster his presidential prospects.
News
2 years ago
by LUKE AWICH Political Reporter
News
06 October 2019 - 11:25