• The suspects' phones headed the same direction from the crime scene to Thogoto where they were switched off.

• Detectives had to track close relatives and friends to establish strange numbers calling then. 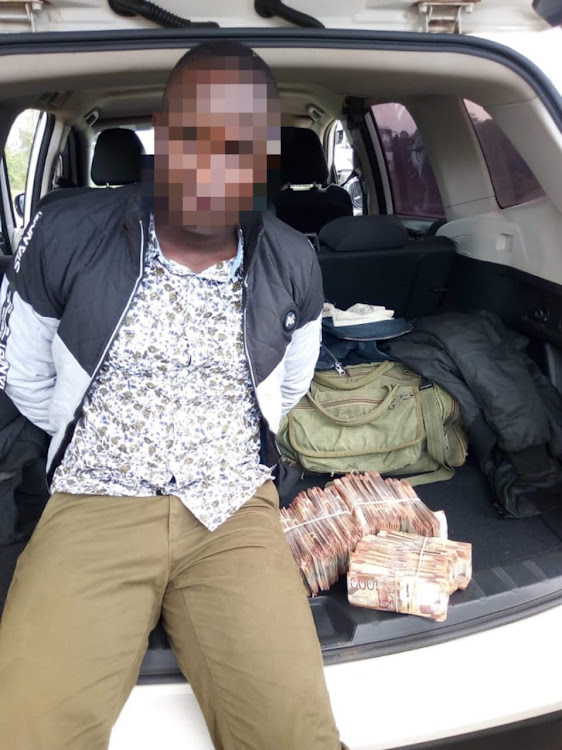 A suspects in the Sh72 million heist and a car bought on the day of the theft.
Image: COURTESY

Detectives last Friday established the phone numbers of suspects in the Sh72 million heist through a process called triangulation.

The phones were later switched off at the Thogoto forest in Kiambu county where the clue helped the officers find thirteen empty cash boxes and a G4S jacket.

“During this time the detectives were also establishing contacts of relatives and friends that frequently used to call the suspects numbers,” an officer privy to the investigations told the Star.

“We then started looking for strange numbers that called relatives and friends. We traced the numbers and how we ended up with the suspects,” he said.

The robbers on the run are believed to be part of a larger plot involving insiders who schemed a smooth getaway plan.

“The detectives are in hot pursuit of the other criminals who are on the run to face Justice. The three arrested suspects are in lawful custody as further investigations are ongoing,” added the DCI.

Both cops were planning to travel to Uganda with the cash before being arrested.
News
2 years ago

The detectives have also summoned senior G4S managers from the security and dispatch departments for interrogation at Lang’ata Police Station.

Police also want to establish the actual amount stolen since the money is always insured to deter the possibility of a fraudulent insurance claim.

The suspects had picked the colossal amount of cash in various denominations from the G4S go-down at G4S headquarters along Witu Road in Industrial Area.

In 2010, Cooperative Bank lost of Ksh80 million from the headquarters in Nairobi after people posing as a cash-in-transit crew from G4S, went to the bank headquarters and walked away with the cash that was due for collection.

However, the High Court last year only sentenced one suspect after being found guilty and acquitted thirteen for lack of evidence.

The heist was the sixth in a series of thefts that targeted local banks, leading to a loss of almost Sh500 million.

Those acquitted included five former top employees of Co-Operative Bank while a former police officer, Collins Akoth Atula, who was found with Sh1.25 million was sentenced to four years in jail.