• The Constituency has 118,276 registered voters, with the Luyha tribe being the single largest vote bloc with 43,000 voters. 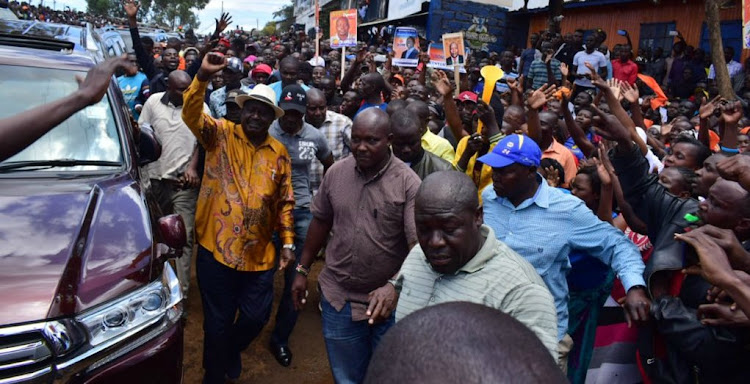 Opposition leader Raila Odinga is facing an extraordinary duel in the Kibra by-election, with its outcome having massive political ramifications for him.

Raila, who represented the constituency for an uninterrupted 21 years between 1992-2013, enjoys near-fanatical support and with his eyes trained on the 2022 polls — whether he vies or not —ODM cannot afford to lose.

The daggers are already drawn in the race billed as a national heavyweights' contest that will overshadow the actual battle for the constituency's MP.

The stage is set for Raila, Musalia Mudavadi and Deputy President William Ruto, all of whom will have candidates in the race on November 7.

Raila's ODM will next Saturday hold nominations after the Judy Pareno-led National Elections Board cleared 11 candidates to battle for the party's flag.

The polls were rescheduled from this Saturday because of "lack of provision of security by the National Police Service".

Jubilee is still fighting over the list to be sent to the Independent Election and Boundaries Commission.

ODM's chances of retaining the seat will be determined by how its National Elections Board handles the nominations.

Analysts have warned that Raila could be walking a tightrope in Kibra in a race that could either expose waning political clout or boost his clout and his image that have suffered bruises in the recent past.

ODM lost in the Ugenya and Embakasi South parliamentary by-elections this year. It rejected primaries and instead handed out direct tickets. Voters hate being bypassed.

Munene said Raila must ensure that he not only wins the Kibra seat but also does so overwhelmingly to demonstrate that he is still relevant and a formidable contender.

“Raila's following is no longer as big as it used to be. His magnetism is wearing out and the Kibra seat contest appears to be fluid. If he loses,  that would be a message that he is on the way out of the minds of people,” Munene said.

Noting that Raila's political mobilisation ability is also on the scales in Kibra, Munene said the ex-PM must ensure the method to be used to pick his flagbearer does not cause a falling out that could boomerang on him.

“He (Raila) has to go out there and ensure his candidate wins. If the losing candidate does very well, that would be an indication of his erosion. It is possible that Raila's candidate will win but it depends on how the candidate will be picked,” he said.

ODM has lost three parliamentary seats so far, reducing the number of its elected MPs from 62 to 59. Jubilee has 141 elected MPs out of the 290 constituencies.

The losses in Ugenya and Embakasi South in the April 5 by-elections were blamed on bungled nominations and poor strategy.

The Movement for Democracy and Growth party's David Ochieng weathered a strong ODM wave to recapture the Ugenya seat from the Orange Party's Chris Karani in a surprise victory.

ODM's Ahmed Kolosh decamped to Jubilee after losing an election petition and went ahead to retain the seat on the ruling party's ticket on April 25.

Should the opposition leader manage to outwit his rivals and deliver a resounding victory for his ODM party, that would fortify his role as an influential player in the 2022 presidential matrix.

If ODM loses the election, it would mean that the party's influence in its strongholds is waning and that the gravitas and the political supremacy of the former Prime Minister have hit a rock bottom.

Bigambo said Raila's stakes are so high in the by-election that he cannot afford to mess up the nominations.

“ODM cannot afford another reduction in its numerical strength in Parliament. It already lost in Ugenya and Wajir West as well,” Bigambo said.

Former National Elections Board chairman of ODM Franklin Bett on Wednesday warned that the party might lose the election if the nominations are bungled.

“As a former chair of the elections board, [I can say that] if the nominations are credible, then it would be a clean sweep for the ODM party in Kibra,” the former Cabinet minister told the Star.

“If the nominations are bungled, that would have a negative impact on the outcome. If I were Raila's adviser, I would tell him to stay away from the nominations.”

The former Buret MP said voters must be allowed to exercise their democratic right in the nominations and choose their candidate without the influence of any third parties.

“If ODM and even Jubilee mess up their nominations, I can tell you, Eliud Owalo might be the surprise winner,” he said.

“If Raila loses Kibra, then that would be the beginning of the end of his political career. The ramifications of a loss would be too much to imagine,” political analyst Martin Andati said.

Andati said that the stakes are high for the opposition leader because, despite the fact that he represented the area for 21 years as MP, the constituency is at the heart of his own political base.

“Raila's political base has never been in Nyanza although he hails from there. He cannot afford to lose this by-election,” he said.

The opposition leader, whose eyes are said to be trained on 2022,  has already instructed the Pareno-led National Elections Board to conduct credible nominations to avert any fallout that might play to the advantage of rivals.

Smarting from the twin parliamentary losses in Ugenya and Embakasi South — largely blamed on direct nominations and lack of primaries — the ODM leader is keen to pick his Kibra candidate through a primary.

Ethnic voting patterns are likely to play out amid fears that a duel pitting ODM against Jubilee could play to the advantage of Mudavadi's ANC.

“We want the exercise to be done in a peaceful environment because we want to show the country that Kibra is mature politically. If you don't win, it is not the end of your political career," Raila said.