I am pushing Uhuru's agenda not politicking, Ruto tells Kabogo

Kabogo had told Uhuru that Ruto was among two people who were politicking ahead of 2022 General elections.

• He was responding to earlier remarks of former Kiambu Governor William Kabogo who said that the was loved by the people but he should instead stop campaigning for 2022 .

• Ruto said that people go after him with no particular reason forgetting that he was sworn in as the Deputy President of Kenya. 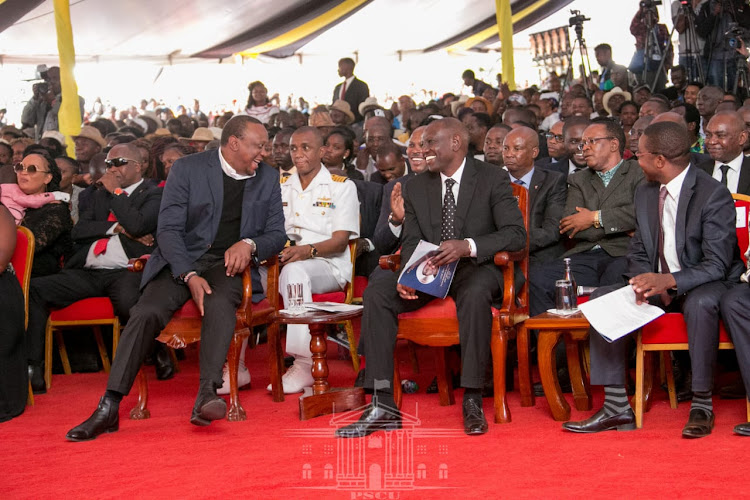 Deputy President William Ruto has rubbished claims that he is actively involved in  2022 politics rather than focusing on development.

The DP, who is always known for bringing humor at social gatherings, did not hesitate to excite the congregation at the late De' Matthew's burial in Murang'a.

He was responding to earlier remarks of former Kiambu Governor William Kabogo, who said that he was loved by the people but he should instead stop campaigning for 2022 .

"His Excellency at times Kabogo is stubborn because he has come to report me to you that I love campaigning. Those are false accusations. ( Rais, Kabogo saa zingine ni mchokozi kwa sababu amekuja kunishtaki kwako ati huwa napenda kufanya siasa... Hiyo maneno si ukweli)," Ruto said .

Kabogo had told President Uhuru Kenyatta that Ruto was among two people who were politicking ahead of 2022 General elections.

"His Excellency the President, there are two people who have the power to calm the 2022 elections early talks. One of them is here and the other one I invited him but he has not come. Both of them are my friends. Deputy President, people love you but you must work first. (Mheshimiwa Rais Kuna watu wawili Wana uwezo ya kutuliza mambo ya 22. Mmoja ako hapa mwingine nilimualika na hajafika. Wote ni marafiki zangu. Deputy President, watu wankupenda but tufanye kazi kwanza)," Kabogo said.

Going further, Ruto said that people go after him with no particular reason, forgetting that he was sworn in as the Deputy President of Kenya.

He went down memory lane and reminded the people that when President Uhuru Kenyatta was sworn in as the forth President of the republic of Kenya, he was on his side.

"After the president was sworn in, I was also called told to pledge and was also sworn in as the Deputy President whose duties to assist the president in developing the country," Ruto stated.

He further said that the problem of those who accuse him of early campaigning is that they compare him with politicians who do not have assigned roles and duties in the government.

"The problem is these people forget and put me in the same class with people who don't have any responsibilities and duties. My friend I was sworn in and assigned duties to help President Uhuru Kenyatta," Ruto said.

Owning to his duties, the Deputy President said he pledged before Kenyans and God, and he is performing his duties.

"If any developments by the President and the Jubilee Party stalls, the first to be asked is me," Ruto said.

Leaders should desist from seeking political mileage at funerals

Crudest form of seeking public attention and pushing idleness to the next level.
Opinion
3 years ago

Senator upset that most elected leaders from region are busy with politics under the Tangatanga or Kieleweke groups
Counties
3 years ago
Post a comment
WATCH: The latest videos from the Star
by MAUREEN KINYANJUI News Reporter
News
24 August 2019 - 18:26
Read The E-Paper