At least 10 guests and family members are admitted in various Nairobi hospitals after testing positive to cholera.

• The food - for a total of 450 guests - was supplied by Hot Dishes, a Nairobi-based restaurant with outdoor catering services.

• Hot Dishes Director Salome Mwangi yesterday said she could not comment as she was attending the burial of a staff. 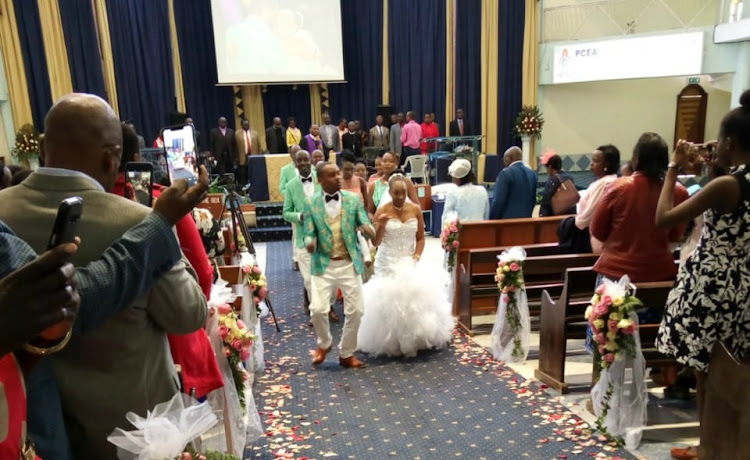 A wedding last weekend turned tragic after one family member died and more than 40 guests fell ill from food poisoning and cholera.

At least 10 guests and family members are admitted in various Nairobi hospitals after testing positive to cholera.

Yesterday, at least three of them were admitted at Mater Hospital, three at Mama Lucy Hospital and four at the Kenyatta National Hospital.

The groom, Wilson Wamunyu and his wife Sarah survived the scare and flew for their honeymoon in Dubai immediately after the wedding on Saturday.

Samson Mathu, the groom's brother, said their grandfather, also called Wamunyu Wilson, succumbed to cholera on Tuesday at 9.30pm at Mt Kenya Hospital. He was 89.

"We have written to the food supplier to demand answers," Mathu said yesterday.

The food - for a total of 450 guests - was supplied by Hot Dishes, a Nairobi-based restaurant with outdoor catering services.

The food consisted of vegetable salad, mixed vegetables, vegetable rice, beef, mukimo, njahi, rice and chapati among other dishes all at Sh184,000.

The high table was served chicken and icecream.

"Most of the guests who complained have sought medical attention and a good number have been admitted in hospital after testing positive for cholera," said Steve Kiruhi, in a letter to Hot Dishes.

"We are copying the county public health department as per the prevailing guidelines on the management of cholera," he added.

The wedding was held at Post Bank Grounds on Kiambu Road in Nairobi.

Hot Dishes Director Salome Mwangi yesterday said she could not comment as she was attending the burial of a staff.

Earlier this year, Nairobi county director of health Lucina Koyio said that all subcounties in Nairobi remained on high alert for cholera outbreaks.

“The county is experiencing a wave of cholera outbreak which was confirmed March 20. In this regard, I am requesting all referral hospitals to reactivate their cholera treatment units to prevent the spread of the disease,” Dr Koyio said.

Cholera – transmitted when people ingest food or water contaminated with faecal matter containing cholera germs – can be deadly if not treated immediately.

Nausea and vomiting occur especially in the early stages of cholera. Vomiting may persist for hours at a time.

In March, the county health department distributed more than 50,000 chlorine tablets to areas where cholera had been reported.

It also gave antibiotics to those prone to cholera in order to lessen the burden of the disease.

The county said it was liaising with the Nairobi City Water and Sewerage Company to super-chlorinate its water as well as establish cholera treatment units in all health facilities in the capital.

Cholera cases up in the city