• Politicians should not misuse freedom of association to regroup gangsters 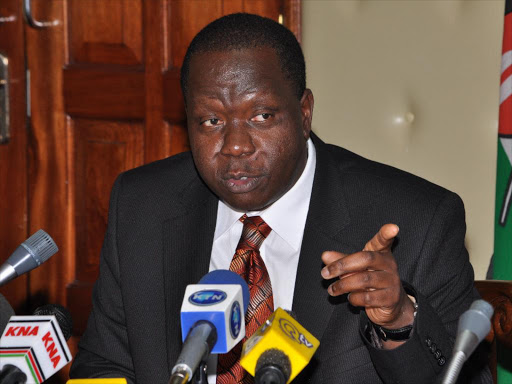 The government will be firm and decisive in dealing with politicians behind the regrouping of criminal gangs.

Interior Cabinet Secretary Fred Matiang'i on Thursday said there was a political link in the revival of criminal gangs, especially at the Coast.

Matiang'i, who spoke at Nyamachaki PCEA hall in Nyeri Town, cited Coast region as a theatre of criminal gangs and stated that security agents are ready to handle the situation.

"In fact, I am going to spend some of my time in the coastal region because of this issue.  We are determined and we are going to apply unprecedented pressure on these groups," the CS said.

He called on chiefs and their assistants to be alert and act against those organising the regrouping of criminals. "There is no limiting of politics but politicians should not use this freedom to mobilise the groups."

Security officers, he said,  will be firm against politicians who do not heed the warning.

"We will not play around with the lives of our people. Any attempt under the guise of political mobilisation to recreate and try to revive criminal activities will be met by very firm and decisive action, " the CS said.

At least eight people were seriously injured on Monday night in Bamburi, Nyali, by youths calling themselves Wakali Kwanza group.

"They shouted 'Takbir!' before they started slashing anyone in their sight," boda boda rider Juma Said said.

Juma, who narrowly escaped the attack, said several young people who may have gone to Somalia for terrorist training, may have come back and mobilised for criminal activities.

The CS called on parents whose children may have crossed the border to report to authorities.

He said terrorism had been an issue in places like Nairobi a while ago, but some suspicious activities are being reported in parts of rural Kenya like Majengo slums in Nyeri.

On civil registration, the CS commended Nyeri as one of the few counties that have cleared the backlog.

He said seven out of eight regions have backlogs and might get 30 days extension now that schools are closed for holidays so that parents can apply for birth certificates.

The CS said works at Ruring'u Stadium will resume and ordered county commissioner David Kipkemei to ensure that work is on course.

The stadium was commissioned in 2017 by President Uhuru Kenyatta but stalled due to lack of funding.

"The President has decided that Ruringu Stadium must be completed," said the CS, who was on a development tour in the county.

Kega said illegal brewing had been revived. He said the activity should be fought with the same vigour as betting.

Contain gangs at the Coast before terror breaks out

Githu, Amugaa and Ngutu locations are the worst affected.
Counties
3 years ago
Post a comment
WATCH: The latest videos from the Star
by EUTYCAS MUCHIRI Correspondent, Nyeri
News
09 August 2019 - 00:00
Read The E-Paper